Order’s not important at all. Good luck!
Reactions: Kinkara

@Kinkara I’m going to do AS next also with my HC trapper. Hope to be able to go Trav with Sorc after that (if AS delivers 4th Sur, which will also speed Sin’s progress in AS), and then Cows with trapper.
Reactions: Luhkoh and Kinkara

This is the only place where people actually want Sur runes

Runes are from AS (left) and Cows (right)..... just notied my cursor is in the way LMAO

So I might be the worst Javazon runner in the world. Cow runs were about 5 mins. each, but I was S&E in Tristram, so the avg. is all wrong. I ran AS on P7 and Cows on P5 since I don't have any skillers and was afraid of not doing enough dmg.

They say "be careful what you wish for"... I wanted a Sur and now I can't complain

But on the good side, now I can make CoH for the trav sorc. I do like trav, as apposed to cows, so maybe the council will be more generous.

I actually prefer the Bloody Foothills for rune running, with a strafer. Found my first Zod that way.
Reactions: PhineasB

@Kinkara 2 at once! Nice you're blasting through them. Lol guess you got that sur. Good luck in trav. I think it's usually quite a bit higher yield than arcane or cows.
Reactions: Kinkara

I need to get better, but I don't seem the understand how to run it the way I should.

Plus I'm picking so much shit. Some day I'll get tired XD

Skull Circle
+10% Faster Cast Rate
6% Mana stolen per hit
All Resistances +6
+1 to Mana after each Kill
6% Better Chance of Getting Magic Items
Click to expand...

Love the ring, no mod wasted and you even got 666 in there
Reactions: Kinkara

Well, for some reason moving my runcounter from one folder to another just wiped off everything that was in it, so I don't have that to show. Times where bad as always, but I think I did around 1.2k runs in the 10 hours.

No haul pic this time since there weren't many runes: Pul, Mal and Lo (one of each).

I was picking up gold for the first 3/4ths of the set, but got tired during the last quarter, so I stoped. After doing that my runs became much faster than before, so I think I could have done a lot more if I hadn't been concentrated on that.

Note that the CoH was made with things found during the other three previous sets. That was cool

Hope to see some updates from everyone else here. I've been left on my own! XD

@Kinkara great job and congrats! Haha left on your own indeed when you don't participate in the biigest forum tourney. But I'll be back to this next week and hope to wrap up my cows set!
Reactions: PhineasB and Kinkara

Hope you have better results than me!

Ignore the avg runtime and total runs here. I used this runcounter just for the 10 hour timer.
Really got in 188 runs with a 3:11 avg runtime. See below for details

Map
I have a nice baal map on this javazon, but wanted to play her for this round anyways, since this is my first time running cows since having found griffons . Not a terrible map, but too open I think, and not super close from stony waypoint to raka pack. But ofc with these finds I sure ain't complaining. 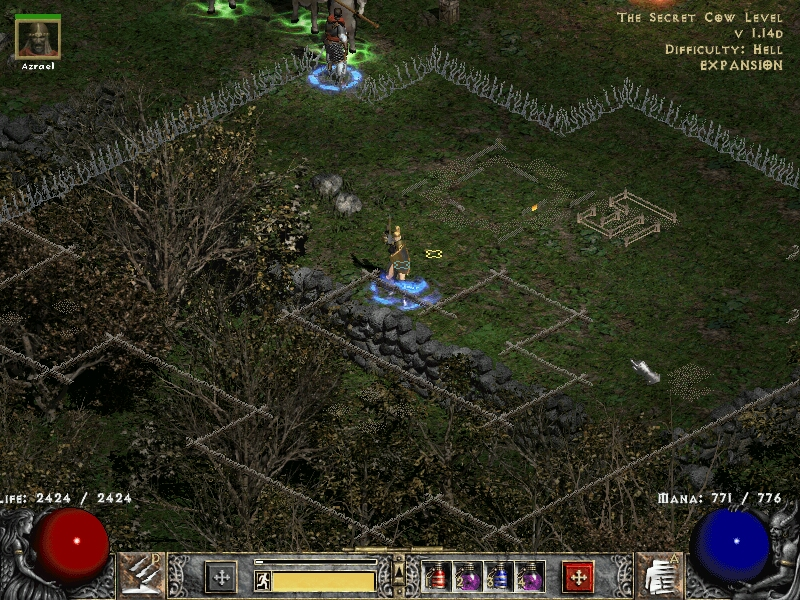 Here were the runtimes. Not to shabby. Wasn't trying to go RFL intensity. Mostly a relaxed pace, and even so she was very good with the runs.

I've heard it before but never taken it to heart: defiance merc is a MUST! Made things so much better. I disliked running javazon in cows before I had griffons, despite having an actually decent setup, mainly because I would die too much from a bad teleport, and then not being able to get out due to slow fcr. Defiance helps so much with this, and doesn't slow down cow herding like holy freeze. And then just practice makes surviving much better too. Seems like they always manage to curse me, and I would die every now and then, but by the end of the 10 hours I felt much better at surviving, and ofc you want to throw your way out of a bad teleport, not tele. I would always forget that and try to tele out. I also originally was running highlords ammy with an fcr/mana leech ring for the 55ias, in order to help with the "throwing out of danger" issue I just mentioned. But decided to try out the caster ammy/soj combo a few hours in, and I noticed no difference. So figured I'd stick with the 2 extra skills. 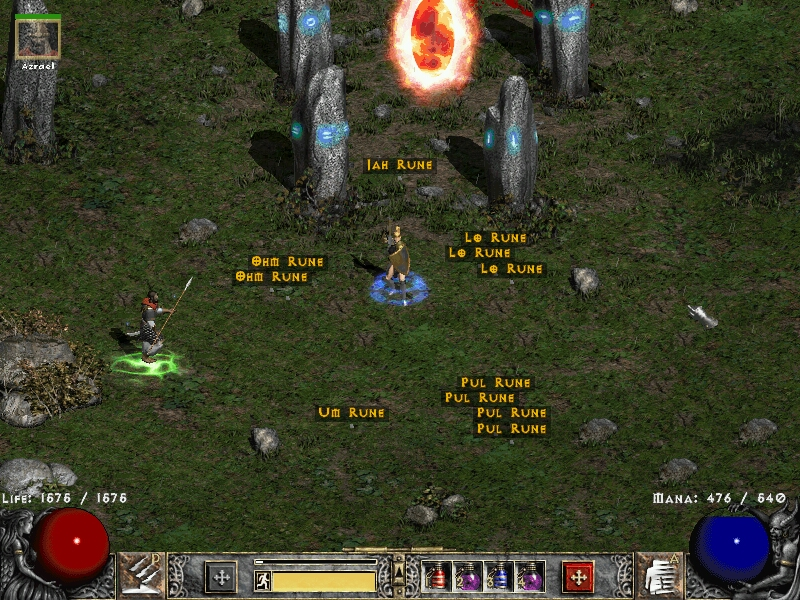 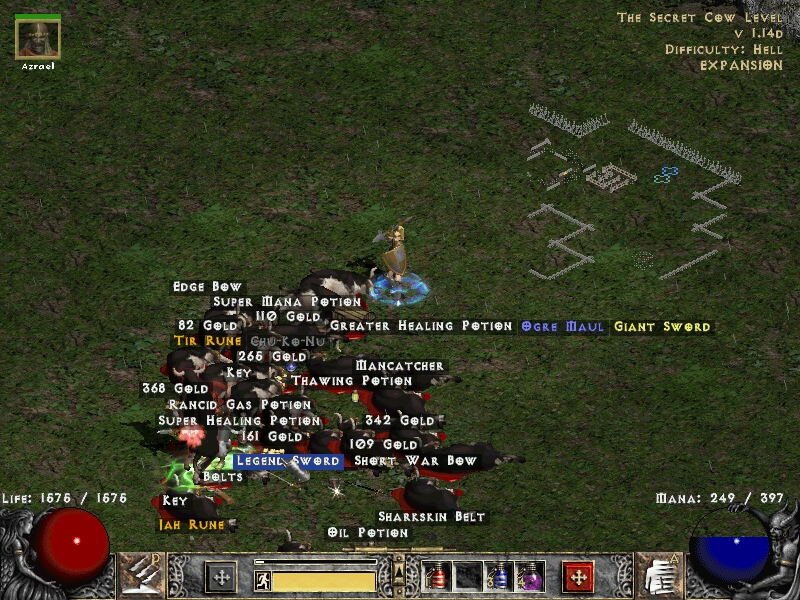 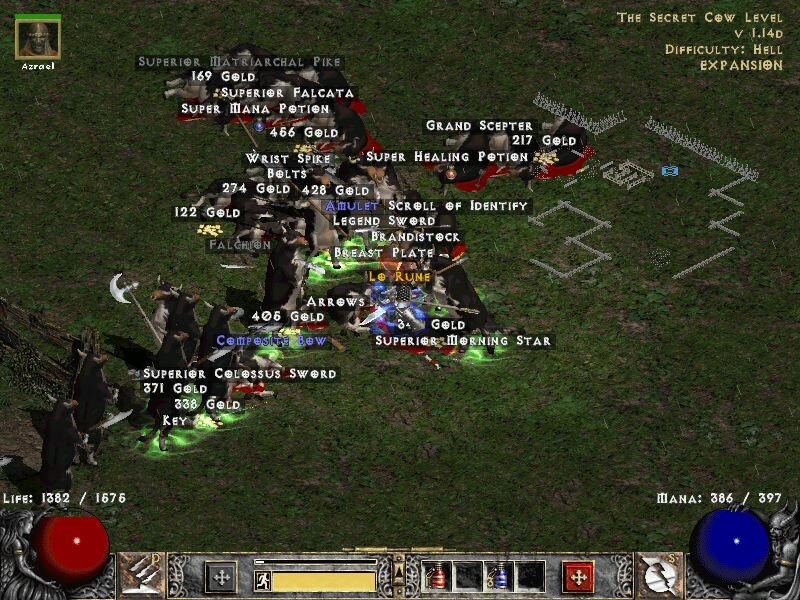 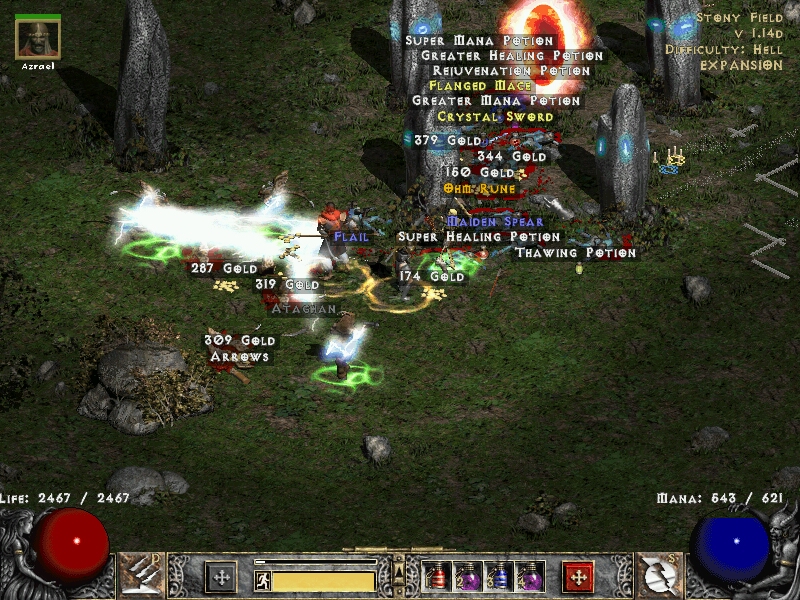 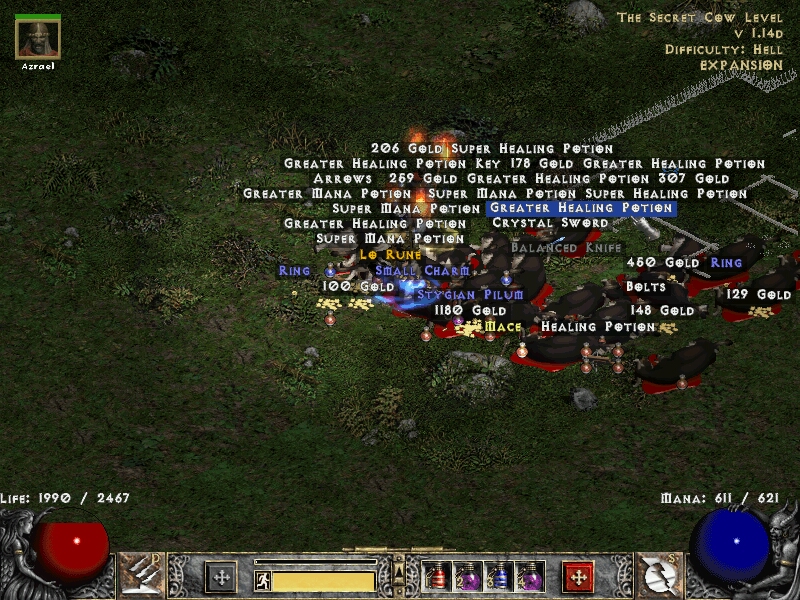 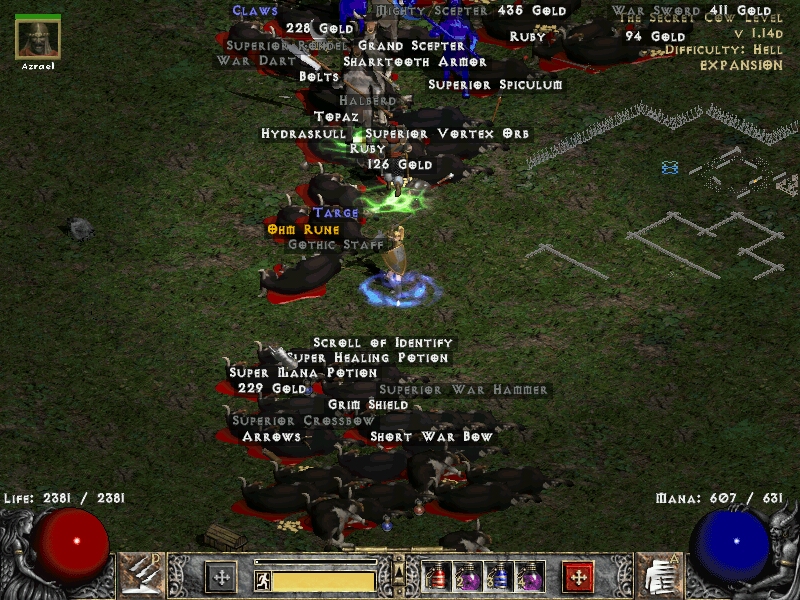 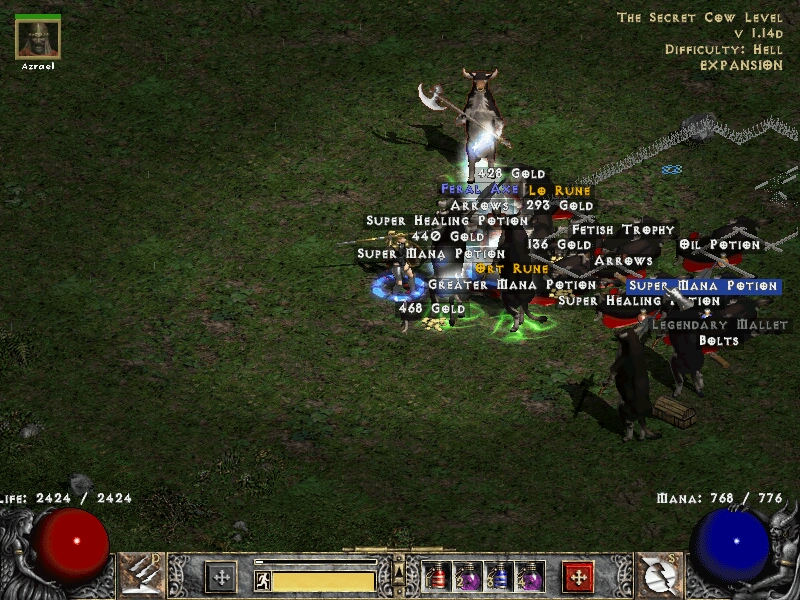 And here are the hours at which I found them

Code:
Wow wow. Quite the set. Ofc that ohm from raka's pack wouldn't count in rfl, but it sure counts here! What a first hour! That's the way I like to start a set . Big fan of this round.

Been hoping for a 7th natural GC for a while now, as it was the last useful skiller which I didn't have 7 of (full inventory minus cube and gheeds). So was glad for that to sort of complete my skillers set .

What's Next?
Next up is trav. I kinda want to do a zealot there . Was intending to sort of take it easy (but want non-terrible runs ofc) during this tour, so wanted to run some characters I wouldn't run in a tourney. But it just so happened that I hadn't seriously run javazon in cows before, so even though she's as cookie-cutter as it gets, was still new for me. And I can't be bothered in LK with something other than sorc. But anyways I think I'll respec my hdin and look for an acceptable map (not going to be too picky). Also pumped about it because I have a bit of a soft spot for zealots, since a zealot was my first ever d2 character, and I haven't played one in ages. So should be fun. As I like to do, am planning to test a few setups on him. Hope everyone is doing well!

Reactions: Jpy, PhineasB, Nano and 3 others

Nice set! Post the drop screenshots when you can!

@Kinkara aren't they in the spoiler "vex+ screenshots"?

Yes they are... I was looking for the Edited little text at the end of your post thinking: "No, I couldn't have missed that!"; but I outright missed it.
Reactions: Luhkoh

@Kinkara a bit late, but runcounter data is in the rcInfo file (without extension). You need to move that file with RC if you want your data back.
Reactions: Kinkara

@Albatross Thanks for the info. I'll try to retrieve it. It's not like I care too muh about that, but I wanted to show I actually did the 10 hours.

Bumping this thread back up, due to progress in AS over the weekend with HC trapper in my two-legged race project. I had done an hour in August, and then picked back up after getting my tourney Barb to A3 Hell, getting another 4 hours in on Saturday and Sunday. Decent results so far, but I will hold off on details until finishing the next 5 hours, which I hope to do later this week and through the weekend. She's actually gotten decent XP as well, which is nice, and is on track to be a good ways into level 89 before the set is complete.
Reactions: Luhkoh

Once I finish my LK project I'm definitely joining this (though I might skip LK lmao). @Luhkoh seeing your LK map makes me think I made a huge mistake sticking to mine for the 8k runs so far. DAMN!
Reactions: Luhkoh
You must log in or register to reply here.
Share:
Facebook Twitter Reddit Pinterest Tumblr WhatsApp Email Share Link
Remove ads & support the site - Get PurePremium
Top Bottom