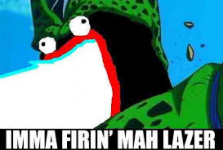 I'm having flashbacks to my highschool days. I forgot all those pictures and videos existed until we started talking about lasers.

For that, maybe I wont use this laser..

D2DC said:
For that, maybe I wont use this laser..
Click to expand...

Ability that lets you kill the person that lynched/locked you but logout screwed it up for you? Or just screwing with us for fun?
L

Pyrotechnician said:
Ability that lets you kill the person that lynched/locked you but logout screwed it up for you? Or just screwing with us for fun?
Click to expand...

Buh Bye to you as well.

Well then congrats logout? I guess?

If D2DC is bluffing then logout tomorrow and we can call this game a wrap.
L

I love that song.

He's going to make you his sex slave...you are going to gargle mayonnaise.
Reactions: zemaj and Leopold Stotch

D2Dc met with his end, ultimately, it was his own taunts that turned the rest against him. As the others grabbed him and tossed a rope around his neck, it seemed as if an illusion was in place around him but was quickly loosing it's effects. D2Dc suddenly seemed less human, he grew quite fat and took on a rounded shape with a brownish orange tint, and he began to emit a seriously rotten smell. Like a really old gourd.

Suddenly and without waring D2Dc simultaneously fired a beam of death out of his ass and exploded in one large rotten mass of pumpkin seeds and ichor. Thankfullt none were hit by the foul emission that was D2DC's last.

He was The Demon Ghast, aka the Flying Pumpkin That Shoots Lazer Beams Out Of It's Ass. He was mafia.

Night actions, send them in ASAP.

D2DC takes one last shot at LEopold Stotch as he dies, but was out of bullets.
Reactions: Leopold Stotch

Luhkoh was found dead, in the main room of the old mill. There was blood everywhere. It seems as if his heart had been ripped out while he slept. Then his head torn off and thrown into the fire.

With three players left alive, two votes will cause an instant lynching.

The day will run until tomorrow at 7PM CST.

Day/Night cycle will now be 24 hours until the end.

Hey Logout, nice to see you again, no hard feelings and all that.