Ok... but no one has rerolled a rare item with a SoJ, right? Right?

Albatross said:
Ok... but no one has rerolled a rare item with a SoJ, right? Right?
Click to expand...

Definitely not me! I only have one .
Reactions: Swamigoon

@Peytron , I also only have one SoJ so far. I'm delaying the pain...

His hellforge runes were eth, lum, and fal.
During the recent MFO, Uncia went from level 81 to level 83 in Mausoleum runs, and was level 85 after he defeated Baal and put down a few cows. I went through all of the exceptional rare items I had collected and GoMuled, and used the upgrade recipes on what I thought were the best weapon and armor:

The combination of high enhanced damage and chance to curse were the two things that made me decide to upgrade it. I had hoped to upgrade an etheral dimensional sword instead, but I never found one with any decent mods on it.

I had collected a few exceptional class specific armors: pelts, primal helms, auric shields, and shrunken heads. For some reason, I didn't feel like upgrading any of them. This mediocre armor seemed to be the one that I might actually use after upgrading it, probably on a mercenary with some topazes, so I did.
So that's six heroes brought to matriarch/patriarch during this little quest. I had also started another sorceress to use in the MFO, but I'm going to leave her parked a little bit longer. There's something about completing a "sept" that I'm sure many of you here understand, so to that end, I think I will continue this project with a berzerker.

This name is an old middle-eastern monetary unit. I had also named the paladin after an obscure historical unit of currency, so when Qursh came up in the output of my random 5-letter dictionary word searcher, it seemed appropriate.
Code:
Reactions: NorthDakota and Peytron 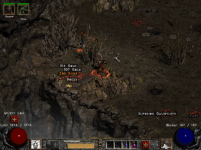 It's another first-time-find for me, so I really should be grateful, but no - I'm actually disappointed/complaining about this...

On the other hand, I do have an ethereal Ribcracker stashed...
Reactions: Tenecabo, Albatross, Ohomemgrande and 10 others
O

should have put it in that Yari over in the corner
Reactions: Swamigoon and Peytron 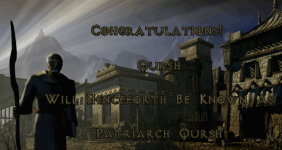 Qursh the Berzerker's forge runes were tir, ko, and lem. He completes my first ever "Sept!" I suppose that's a nifty milestone accomplishment to briefly celebrate, before I continue pursuit of this little cube recipe grail quest.

Barbarian's don't usually get any minion summoning skills, but Qursh got lucky: he wore a Carrion Wind unique ring from NM act 4 through most of Hell act 4. With that ring, he was able to use spell charges to summon a poison creeper minion. Every time he summoned one, it only cost a few thousand gold to recharge the ring, so I felt free to use it liberally. I think I made him recast that green weed well over two hundred times, and for many battles it provided a very nice distractor and monster poisoner. Anyway, I think I can claim that this was an all-minion-summoner "sept," right? (Okay, I concede that's too much of a semantic stretch - the paladin summoned fist-of-the-heavens lightning stomps from the sky, but I suppose those aren't really "minions...")

No new recipes to report yet, but with luck I'll transmute one of the remaining formulas soon. However, I did re-use a previously checked-off recipe, with a pretty interesting result: 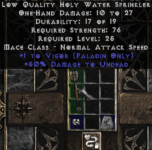 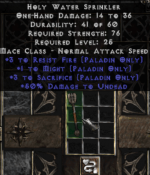 I think that's a pretty nice level 1 item! Then I tried the same recipe a few more times, but the results weren't quite as nice: 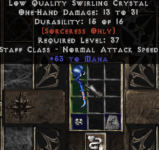 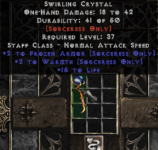 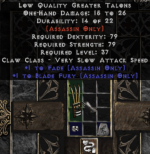 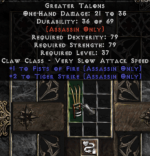 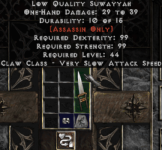 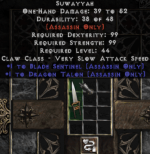 Before he achieved patriarch status, I used Qursh as a Lower Kurast runner for ten hours in the recent "Finding the Balance" tournament. I used Xylia the blizzard sorceress in the Ancient Tunnels for the other ten hours. I had also used Xylia in the 2020 summer MFO, and with all of those AT runs she is level 89 and getting pretty close to 90. Anyway, after letting Qursh go berzerk on some hell difficulty cows, I went back to Xylia. After all of her AT runs, she finally defeated Duriel, and moved on to hell-difficulty act 3.

I also spent some time with Vinca, running NM quest-bugged Andy, looking for another SoJ, but without luck. After (I think) 600 more NM Andy runs, I have GoMuled over a hundred ilvl 49 Cathan's Seal rings, 32 ilvl 49 Manald Heals, 27 ilvl 49 Nagelrings, and 51 ilvl 49 Angelic Halos, but still no second SoJ.
Reactions: Peytron and Pb_pal

As a sort of "chapter divder," I reported some more details about the seven characters I matted/patted so far on this quest. For the next "chapter," I decided to start another paladin. 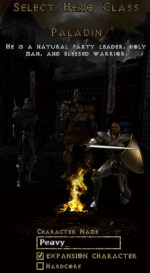 I guess I'm sort-of working backward through the alphabet with random name choices. According to some online dictionaries, peavy is an alternate spelling for "peavey," a long spear with a hook added at the pointy end, used for rolling/positioning raw lumber as it's getting transported to a sawmill. I figured the name seemed appropriate, since one of my plans with him involves my recently acquired ethereal Hone Sundan.
I'm planning to use a build I have never tried before: Vengeance on LMB, and the various defensive elemental auras that synergize Vengeance on RMB. I'm hoping that as he gets a little way into nightmare difficulty, I can try out some new weapons: an ethereal Hone Sundan unique yari and a Lightsabre unique phase blade, and when he gets to hell difficulty, the Astreon's Iron Ward unique caduceus that dropped for me in the recent MFO tournament.