You are using an out of date browser. It may not display this or other websites correctly.
You should upgrade or use an alternative browser.
F

His Zod item was an ethereal Earth Shifter, a drop that prompted me to start the sept. The unfortunate thing was that I recently played a Druid with Earth Shifter, so in order to differentiate the two (and to make the most of the eth Shifter) this guy had to focus on physical damage. And that's what he did. 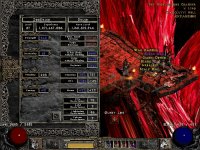 This time it was P8 all the way (no exceptions). He did struggle with that at times. The PIs in A2 were surprisingly easy as his fire skills helped here, but CS and the dungeons in A5 spawned a few ugly monster types, were he had to kite a bit and be careful overall. Overall he died 4 times or so, as opposed to the Wolfbarb who didn't die at all.

Pretty uneventful playthrough, and gameplay isn't that special anyway so I didn't bother recording any... Basically just casting Armageddon and hit stuff with Fury. This Earth Shifter Druid guide is a nice reference if you want to learn more about this Fury variant.

Before reaching lvl 69 to equip Earth Shifter, he almost exclusively used Fissure from lvl 12 onwards. This post contains information on how he started out and some twinking gear.

Only drop worth mentioning was Gul from HF.

Overall definitely a solid and Hell viable build, though as mentioned above he struggled in certain areas on P8 despite using some of my best melee gear. I think the main thing holding him back was the fact that Zod'ed Earth Shifter only reaches 8 FPA Fury. Considering all shifting builds I've played and their varying attack speeds, it seems for my taste at least 7 FPA is the highest I can go without "feeling too slow", whereas 8 FPA is just that little bit too much... Being stuck in attack animations and interrupted before hitting were some of the issues I experienced. His damage output was better than the 7 FPA non-eth Shifter variant, but the "feel" just wasn't so much for me.

Anyhow, that's #4 in the Zod sept, with Necro, Paladin and Sorc remaining. Paladin will use a very powerful build, but I think I should give some more thought to Necro and Sorc. Both were intended to be played as Bears with relatively slow weapons as well, but I'm not sure I really want to go for slowly attacking melee shifters again... In any case, given D2 time for the next weeks will be spent running in this tournament, maybe more interesting Zod items show up!

Nice, looking forward to the rest!

Congrats! I understand this "feel", and personally it's specific to shapeshift wolves.

Not sure whether psychological or the attack animation, but having to choose lower damage @ higher fpa vs higher damage @ lower fpa, I tend to prefer the former.

@saracen85 Do you notice that at higher fpa, you get monsters into hit recovery more reliably (even with somewhat lower damage), while at lower fpa there's more risk of a monster hitting your character before your character can hit the monster?

Honestly, I can't pinpoint the exact reason. The following instances that stood out, at least for me..
1. Feral raging @ 3fpa (wolfbarb) feels so much better than fury @ 5fpa (druid)
2. Feral Rage @ 5fpa (crainte vomir) feels better than 6fpa (grief), both on wolfbarbs
3. Shaeled over non-shaeled ribbies on fury druids

@ffs nice inspiration for me, as my HC Fury druid had a tough Act 2 vs PI. I want to get him a Reaper's toll before continuing, but maybe some fire respec could be something too!
You must log in or register to reply here.
Share:
Facebook Twitter Reddit Pinterest Tumblr WhatsApp Email Share Link
Remove ads & support the site - Get PurePremium
Top Bottom