You are using an out of date browser. It may not display this or other websites correctly.
You should upgrade or use an alternative browser.
Z

@jimsfriend that is basically a perfect twinking ring in every way!

...and to think I nearly S&E'd before hitting this rack...phew! 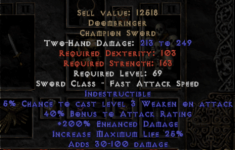 Everyone need's a collection of necro heads 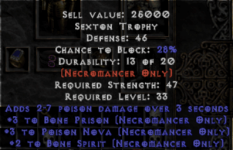 Watch out @D2DC I found a new war scepter map ! Which also happens to drop coronets and russet armors!

Anyone kow if the MF is hidden in 1.08 as well?
Reactions: d2lover, teddeeboy, snickersnack and 4 others

@ziambe, well then find a good one to send my way! XD

Seems like you can catch Corona anywhere.
River of Flame 1.10a with about 50% MF 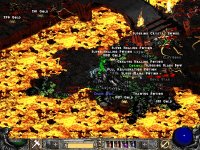 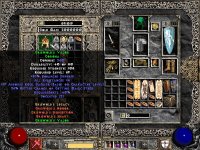 I've been doing some gem shrine runs and have it on /p3 so I can hit poppables a bit along the way. I'm up to about 18 p-ammies, and I got this yesterday: 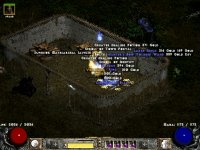 Racked this in LK. Of all of the staffmod combinations I've ever found, I think these might be the nicest. 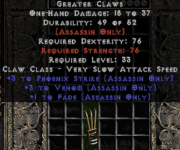 @Swamigoon Is Chaos good for a Pheonix Striker? Or how about a kicksin? I might have to try out my Chaos on one of my kicksins for the sweet CtCs. (I'm also considering making a Rift for a kicker.)

Well, I shrined** up 55 pammies and got to crafting, here are the highlights:

That first one is certainly useable, but the lack of all resist is a big minus. The +dex would let me move some points into vit. I may just stick with mara's and try again after I get a new batch of pammies.

The other two might be useful for a barbarian that teleports for runs; notably, the mana steal one might be good for trav runs. Maybe that and two HotOs could get to a good bp, and you also get your mana leech, so that might open up another slot. Too bad about that +life roll, though. If it was higher (60 is the max iirc), then it'd allow me to move some stats from vit to str.

For reference, and a bit of schadenfruede maybe, here is my previously-best hdin craft:

I started doing shrine runs in tandem with LK and RoF runs with my meteorb, but then got the wise idea to try to roll a better shrine map on my blizz sorc. Behold: 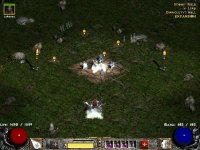 Loading time became a factor since the runs were so short, but it worked well. Oddly, even though I have d2 installed on an M.2, the game takes a little while (5 seconds?) to close after hitting S&E. Anyone know a way to improve that? Will -ns work?

Edit: this was not a reroll. This is the map she was already on went I loaded her up.
Last edited: Sep 4, 2021
Reactions: teddeeboy, d2lover, saracen85 and 2 others
F

2/10 Pally is nice indeed, can often be a meaningful upgrade and in many cases freeing up a ring slot, but..

That is really good! Basically every +2 Barb, 15+ FCR amulet is a very desirable craft (I haven't crafted one in som 2000+ amulet crafts), and you've got some resists to boot as well.
Reactions: snickersnack, saracen85, Swamigoon and 1 other person

ffs said:
2/10 Pally is nice indeed, can often be a meaningful upgrade and in many cases freeing up a ring slot, but..

That is really good! Basically every +2 Barb, 15+ FCR amulet is a very desirable craft (I haven't crafted one in som 2000+ amulet crafts), and you've got some resists to boot as well.
Click to expand...

Thanks for letting me know!

eventually I got the minimum for a Faithzone (GMB):


Code:
it even has ML, tho not sure if it is enough for constant Multi/FA spam
Reactions: teddeeboy, intersilva, snickersnack and 6 others
Z

Yummy gloves @d2lover
You can also craft 3/20s on vampirebone gloves in 1.07 if you're feeling lucky
Reactions: d2lover

ziambe said:
Yummy gloves @d2lover
You can also craft 3/20s on vampirebone gloves in 1.07 if you're feeling lucky
Click to expand...

Mmh, I would rather try it with heavy gloves, since I don't want the hassle of using a rune right away. What I miss out then is some CB which doesn't work properly with arrows anyway.

think it's the highest dmg i've seen since my reset

Not the rune I was after, but I take it: 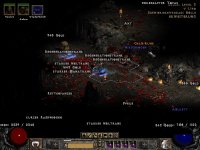 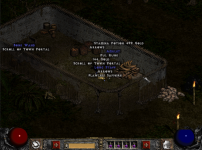 The ish is realized:

And I have everything else I need for Faith Multi/FA/Lightning berserk zone: 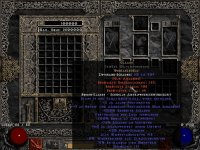 I call it perfect for my usage.

And this for leveling (no 1.07 ravenclaw for this char): 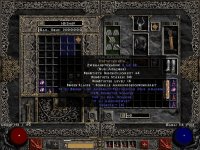 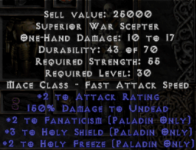