This tournament has already ended. It was originally posted by @PhineasB on Aug 26, 2018.
(link to original thread on diabloii.net)
​
Meet the Olympians threads are for showing off your character from the corresponding MFO. You can include whatever details you want; it's a chance to brag on your runner or just to show them off. 2019 Summer MFO sign up and progress thread is here, and the results thread is here.

I ran my untwinked 99er zon, Quinta, like last year, but this time she was a Baal entry. She was at 97.25 to start, and got the full level, pinging 98 last night (forgot to take a screenie, so it's from this am).

She managed 219MF, with maxed lightning resists, 55 fire, and ~25 for the other two. In all, except for skillers (only 2 so far), she is nicely equipped. She managed around 5.3M/hr when factoring in repairs and stash management, so quite fast.

It was again great to enter an untwinked 99er in an SPF tournament, with friendly competition and nice drops the extra motivation to push for XP. Let's just say that level 97 went much faster than it would have otherwise, and I'm quite glad to leave Baal behind for her

Thanks to all the participants in the MFO, especially my teammates @ziambe and @maxicek for nice encouragement over the 10 days. It was great fun again!

Stats, etc. are in the spoilers below. 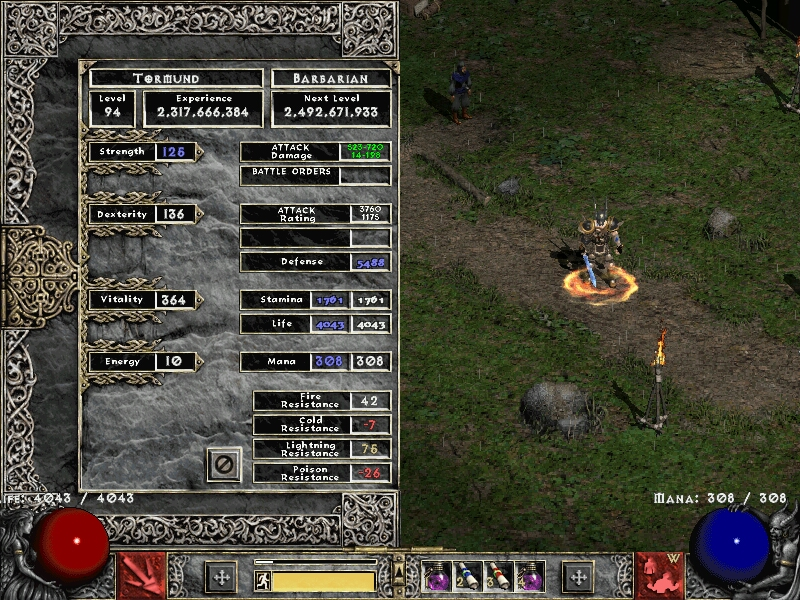 Tormund level'd to 94 as dual grief ww at baal in prep for MFO, then respec'd to berserk. I feel like everyone seems to have the mindset that you have to gear the pitzerker as per the guides, which is a nice way to gear him to be sure, but then they complain that he is not comfortable to play. I felt like you could make him much more comfortable, beginner friendly, and budget and he would still be more efficient than most other characters, so I made this guy.

So as you can see I did several things different. I used ist'd gull dagger because it still hits 9fpa with 20 ias (which I get from LoH) and is ofc cheaper than the 6ist phase blade. Used trangs belt for cbf. I thought about using death's sash to go even more budget, but turns out I don't have one . Wanted LoH because it guaranteed 2 hits to kill all enemies that weren't magic resistant. Or at least thats what I calc'd. Seemed like it took more hits sometimes. Used IK helm and boots just because it was budget themed, and they look cool and work decently well. I thought 504/374 MF was definitely good enough for my beginner zerker.

On the skills, I wanted to max BO for comfort. To do this, not putting more than 1 point in shout is the obvious first sacrifice. But then I decided that 16 soft points in find item (49%) was all I absolutely had to have. This allowed maxing of weapon mastery, but if I was lower level, I would have been fine putting fewer points here too. I later rolled the 2 barb skill ammy (and didn't think about BC) so i ended up with more in find item, but was OK with it.

I also decided to max my light res after I died a couple of times zerking LE enemies. I guess my problem is I often don't notice they are LE until I've hit them a few times, but anyways this made things more comfortable as well. I did die 2 times I think in my 860 runs, but both were from just being hesitant to use full rejuvs for no reason. I didn't die any in the second half. Wouldn't mind testing a max block rhyme variant as well, giving up 105mf, but I was satisfied with Tormund.

I got down to ~87 second runs by the end of the MFO, with a map that was averaging 8.3 bosses for 50 runs before the MFO. This leaves a lot to be desired, but I'm not particularly skillful (yet ), and I think he's still by far my most efficient MF character. I'll be interested to play him again at some point in the future and see if more conventional gearing decreases my runtimes significantly.

So this lady and I have been through a lot. She's been named after my melee elemental tank sorceress and has found 503/504 grail items. If not for the two deaths, both due to being amped and TPing straight into a might pack, she'd have likely passed the half way mark to 98 during the MFO, starting at 1/4 of the way there.

She's a standard blizzy, with 1 point in warmth, TK, TP, and static. I used to run without warmth, but it really helps with mana recovery after getting mana burned. That way I don't have to spend and pick up more purples.

Rings could use an improvement. I rarely pick them up and I never ran LK in this iteration (restarted a few years ago), hence the sub-par rings and charms.
Last edited: Aug 11, 2020

I ran with Trina, my entry in the untwinked 99er reboot. She started out 80 mil into level 95 and ended 33 mil into level 97. Total run time was 50 hours with a run average of 3:12 -- about 938 runs at 8.47 mil/hr. 400 were done with LiveSplit, but I found binding the keys to numpad interfered with using the MFO google doc and switched to Silospen's run counter (which was very bad at occasionally not advancing the run number).

Code:
She's VERY excited about using her newfound Griffon's Eye to see how run times improve. Also found a 3os HHG I may use for facets if I can find a Cham for Griffon's or just replace a ring with Ravenfrost.

I ran P1 Pindle with my level 95 Berserk Barbarian, Serpent. We had one death due to watching OG.ana ripping shit apart (and helping his team secure 15.2 million USD!) on my favorite Dota 2 hero, Ember Spirit, without paying attention to Pindle's bros hacking at me.. I didn't have time to acquire 2 socket quests for a 105 FCR setup with my new 2/5 craft but I'll test that soonTM with and without Ghoulhide to see where I can push effective MF without sacrificing speed etc.

Vildecor said:
This is one of my favorite parts of the MFO. Everyone shows off their suped-up characters and gives me a perfect template for what to try to build towards!
Click to expand...

So ... I ran Pindle on p8 with my pretty stadnard Blizzard sorc, Ada. She's been my primary mf character for about two years now and about 3/4 of my D2 wealth comes from her. At the start of MFO she just reached level 94, but progressed for only about half a level, because I died 4 or 5 times douring MFO. She had 452 mf.

Here's my runner, Calanthe. She was designed as a DS Sin, inspired by ffs's thread about his Fancy Furysin turned cow runner and some other theorycrafting about DS sins in the RFL. I found the idea interesting in the cow running context but really took to it as a pit runner. I quickly built one up and then ran the pits during the third round of the RFL and continued running after that. At 95, pit exp was miserable and I liked the char so I turned to baaling. She's probably one of the toughest chars I've ever played, she never died till she was 91 (funny because I've never guardianed) and still has only a few deaths, the most recent as I was testing Baal setups just after reaching 95. The main goal of my comeback was 2 99 attempts that I never completed. Calanthe has turned into my unexpected 99 attempt and is moving along well.

I'm still fairly new into my restart so there's lots of room for gear improvement, not to mention a good bit of MF I could toss but she's already pretty tough. Really if there was anywhere to improve, it would be my merc. I really don't have to worry much about her but I feel like I'm constantly babysitting him.

The setup
Her setup started - and was most of the time - with a Spirit Monarch so she could hit the 105 FCR, but she ran the last few days using a Phoenix monarch after @art_vandelay advice, with an ist'ed Occy, and several skillers, giving her a solid 9-10k fireball damage, -28% fire res, while keeping more than 500mf.

Full rejuvs in belt
Merc was using a classical Infinity eth tresher/Andy/Forty SA combo, not much to say there.

The top 5 analysis
Beside the Windforce, Death fathom and Death web than she didn't drop, she managed to win the Pindle race without real useful items in the top 5: the eth Griffon is the top fail, but the Mang song's lesson, with not so good roll, is hardly usable, and the templar's might is a parade can. For the two necromancer skulls, at least the bloodlord one had good roll (2 curses/3 p&b/3 summoning Darkforce spawn). Maybe for a/my summoner?

The storyline
The runs started very well, with a Zod (!) drop during the first session. By the end of the first week end, the Boneflame, the Darkforce spawn and the eth Griffon's eye had been dropped, supported by an Eaglehorn and a Leviathan, in about 18 hours.

During the weekdays time span, the second milestones contained the Templar's might, and another upgrade being and Heaven's light. An Um and an Ist went to drop also, as nice side rewards. The Phoenix monarch had been crafted at that time, and been put in use the following days, improving timings by about half to a full second.