This tournament has already ended. It was originally posted by @Grape on Nov 15, 2017.
(link to original thread on diabloii.net)​

Thanks for your patience!

+2 to Shadow Discipline Skills (Assassin Only)

Extremely great results overall. The Blue Wonder didn't drop this time, neither any records were made, but the quality was really good from top to the bottom!

I will add my own readouts once I'm in the possession of my laptop that has D2 again, sometime next week I suppose

Thanks all the participants, thanks @zemaj for supervising and thanks for all the cheerleaders that popped in to the MFO running thread. You better run next time yourself!
Last edited: Jul 30, 2020

Also the order was flipped for one of those lists (27.x was the second item listed)
Click to expand...

Locohead said:
Interesting distribution of finds. Out of the top 6, 5 people found exactly one 27.x point item and no one found more than one. I still want to run the probability on all of that. Like how many runs it would take on average to find one or two 27.x+ point items. From observation it seems like it must be once in ~1500 drops on average? I guess now it's time to see what items the top 2 will grab :|

For my drops - Ravenlore was the only big item that dropped on my original map, and that's where I did more than half of my runs. New map on Wednesday gave me 2 of my top 5 (Griffon's and I think Boneflame) in only a couple dozen runs, which was shocking. I still hung out in 8th overall, which was also shocking. But then the Iron Ward on Saturday and I was back in it. But after that godly drop, nothing other than one minor upgrade (Steelrend.)
Click to expand...

Agguh said:
The timing of this MFO was unfortunate for me, as I bought a new bike just before the begining of it and the weather was very nice all week so thats where most of my spare time went. Therefore I only did 1000 Pindle runs instead of 3000 I had planned.
Didn't manage to find Deaths Cleaver I was after (had at least 5 rare berserker axes!!) but still found some cool items.
Good fun.
Click to expand...

Yng said:
Good job all, fun tournament. This was my first MFO, I didn’t really have as much time to play as I’d have liked, and my character was underprepared but overall I think I gave it a decent effort and the results were seemingly close throughout. Disappointing no one got the big one but there are some good finds here nonetheless.

Albatross said:
@DiabloTwoinDC, you almost had me, I'd say you did very well for the amount of runs you managed!

Well, as is tradition.. here's a haul screenshot. I've only dragged the best stuff in. Runes not included since it was just one sur and a bunch of mids.

Edit: @Yng thanks! And you just reminded me.. I had that "mini heart attack" moment when yet another sacred armor dropped, alas, the unnamed item still eludes me..


Edit 3 (I wonder how many of these I'll add): I do not wish to claim any items as my goal is a self found grail.
Click to expand...

DiabloTwoinDC said:
Congrats to @Albatross. I knew I was close, but just couldn't manage any significant upgrades the last 3-4 days. I was running with nearly 700% MF, hoping that would compensate for fewer/slower runs.

EatSleepDiablov2 said:
Obligatory haul pic (does not include one BK CB and 4 BK MS):

As I indicated in the original thread, I ran Pindle in December 2009 with a LF based Amazon in search of IK and Tals armors. Although a bit clumsy and not optimized, I was successful in finding both after 4,168 runs.

Total MF varied a bit in the initial stages of the project, but ultimately amounted to about 650.

Notably, I documented every S/U drop to better understand his TC distributions and overall tendencies. My original thread is here.

I recently restarted D2 after a five year hiatus. When this MFO rolled around, I opted to run Mr. Skin again, this time with a bit more MF (715) and a specialized toon (fully optimized, lvl 93 Blizz sorc). As before, I picked up every S/U.

After tallying the figures and doing a comparison, the results were somewhat unexpected:

Notable:
The TL;DR Version: The 10% relative increase in MF did result in a similar bump to Pindle Drops.

@Aqquh. I knew all those green BPs and Cathan would be the difference...

BTW, the Flavie report is attached (hopefully) for reference...
Click to expand...

EatSleepDiablov2 said:
Edit: Make that "runs per drop" not "per run".

And thanks to Grape for putting this on...
Click to expand...

EatSleepDiablov2 said:
Edit: Make that "runs per drop" not "per run".
Click to expand...

Lol, I was thinking the same thing.
Click to expand...

Locohead said:
Interesting distribution of finds. Out of the top 6, 5 people found exactly one 27.x point item and no one found more than one. I still want to run the probability on all of that. Like how many runs it would take on average to find one or two 27.x+ point items. From observation it seems like it must be once in ~1500 drops on average? I guess now it's time to see what items the top 2 will grab :|
Click to expand...

I'd like to find out too, we could post our run # / MF now that the scores have been revealed.


DiabloTwoinDC said:
Congrats to @Albatross. I knew I was close, but just couldn't manage any significant upgrades the last 3-4 days. I was running with nearly 700% MF, hoping that would compensate for fewer/slower runs.
Click to expand...

My last significant upgrade dropped on 8.11., since then my score improved only by 1,2 points The extra MF is only worth if it doesn't slow you down. Once you hit 500% MF a single second of run time is worth more than 50.
Click to expand...

Also the order was flipped for one of those lists (27.x was the second item listed)
Click to expand...

ffs said:
Congrats everyone, I really like the Griffon's, Death's Webs and Death's Fathom drops. Amazed by how much crap dropped otherwise and how much points are awarded for it.

@Grape thanks for hosting again!

As I cared more about XP progress for my 99er Sorc and without meaningful grailers I'm still looking for, I didn't have any real goals for the MFO tbh. However, there was one drop that really got me shaking for a second:

Which turned out to rolled almost perfect ED and...

And of course this beauty dropped 20 minutes after MFO ended:

Other drops are listed here in the 99er thread, but nothing too fancy.
Click to expand...

Fabian said:
Loco and others,

Old-timers will remember me and my stat spreadsheets concerning drop rates. Just opened it for the first time in a few years to shed some lights on the numbers you're curious about.

Normally, this spreadsheet represents drop chances of a Death's Web for my Pitbarb. That is to say, the number of monsters killed, the MF, the hork%, etc, are for my p1 Berserker, so the results will be somewhat different for other classes/areas. That said, it will probably give you a decent ballpark idea (though the real numbers are likely somewhat "worse", since my Pitbarb is very efficient indeed). Anyway, here, instead of calculating the drop chance for Death's Web, I cut all those numbers in 3, since there are three 27.x qualifiers (for example, the chance of a Boss dropping DWeb is actually 3 times lower than the 1/35430 indicated in the screenshot above).

Again, it's worth noting that these numbers are almost definitely inflated compared to most area runners, since an AT map rarely has more than 5-5.2 bosses on average, and most pit maps have significantly fewer than the 8.5 I'm using here. Of course, if you're running AT, chances are you're a sorc, which means killing more minions and regular monsters, but the effect of that is very small compared to the effect of killing fewer bosses/champions per run. Also, if you're a sorc, you're obviously not getting the hork, which makes an insanely big difference and basically adds 50% to your Chance/Run number. In any case, my point is, don't treat these numbers as gospel for other characters, but they're a pretty decent start, I would say.

Let me know if you have any other questions.
Click to expand...

Fabian said:
Congrats to the winners! Fun to see another MFO results thread, and I always enjoy a good haul pic. Here's to many more MFOs in the future, it's the finest tradition we have in this forum.
Click to expand...

LiquidClear said:
Huh. I really thought I had this one, dunno what happened.
Click to expand...

Gynli said:
Congrats to the winners! @darkstarhub @EatSleepDiablov2 @Albatross
and thanks to @Grape for hosting and @zemaj for helping out. =D

This was my first MFO and I must say I thoroughly enjoyed it. I like mfing in general and I like bowazons even more; so I ended up putting in alot more hours than I would've normally. My initial goals were just 5 qualifiers and some basic gear for Hell, but with some good luck and lots of extra hours, I ended up with 50 qualifiers and one end-game gear let alone basics. Gonna have to catch up on RL this week. =P.

On the left are my top 5 qualifiers. I found the Darkforce Spawn on the second Saturday; result of some motivationtal nudge from @zemaj =D. That alone jumped my score by 13.3 points. Considering I had 36.6 prior to finding it; it was a big big find.

On the right are the major gear upgrades I had during the week. I found a WWS early on, and ended up using one full day on Countess for a Pul. The tiara is a nice little thing with +2 ama, 30 frw, 20 all res and some other mods. The lucky Lo rune dropped for me sometime middle of the week; and the Fortitude boosted my clear speed considerably. It's my first ever, so I'm still happy about it.

In the middle you can see all the Pul+ runes that dropped for me throughout the week. I feel I would've done better if it were a RFO lol. 1 Ber, 2 Lo, 2 Gul, 2 Ist, 6 Mal, 2 Um, 4 Puls. The second Lo will go towards another fort for the merc, Ber and Guls to try and save up to Jah and Ohm for Faith, and I'm pretty sure the rest will rot in stash or until I set up a giveaway.

I hope to join the next with another char, not for the win but for the awesome week I know I'll have. =D

EDIT: @LiquidClear I read your post saying your top 3 are 'solid' around the time I had the goal of getting about half of the top score. When I found out the previous MFO had 120-some points on the top several, it was... discouraging, to say the least. lol. I know it's late, but dang, congrats on that achievement!
Click to expand...

Locohead said:
Eh, may as well post a SS of some of my haul: 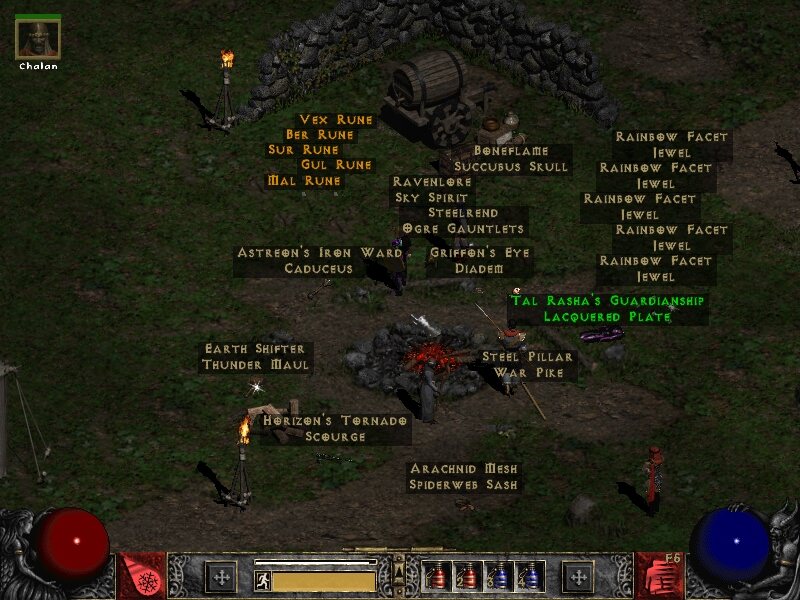 ziambe said:
Beautiful results guys! Especially love those DWebs 49 and 50%! I played along with you guys unofficially and found an Eth one
@Gynli grats that is a lot runes for the pits!
@ffs Nice CB! It's almost perfect ED!!
@sensei Fabian nice to see you again! How many packs would you say is average for the pits?
Click to expand...