Indigo is the sixth character to complete her journey in my Colour-Coded Sept. The sept is based around having one character class respresent each of the seven colours of the rainbow. Basically, all gear must adhere to the chosen colour, as well as skills where possible. 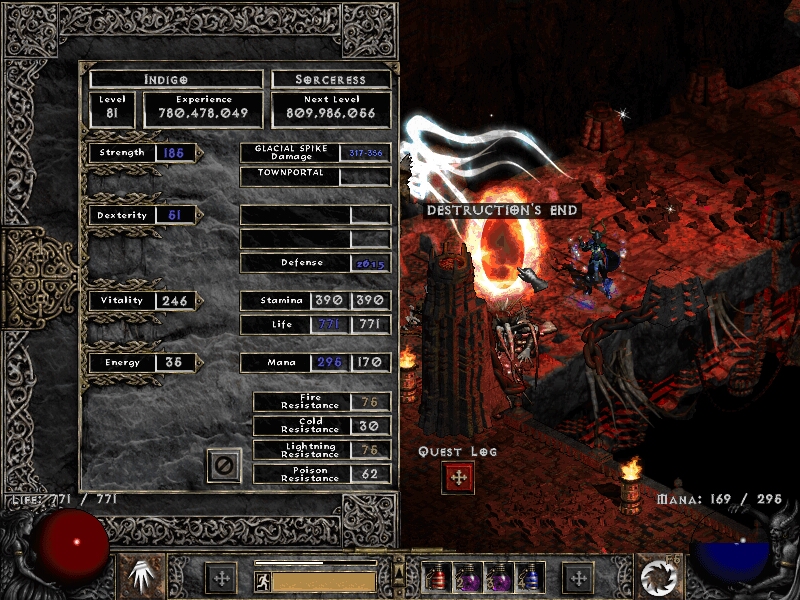 Indigo (dark blue, for this sept) was an easy choice for sorceress, since I love cold sorcs. Unfortunately for her, most of the good sorceress equipment is LIGHT blue (like Nightwings, and Fathom for example), and therefore got used on my Paladin. This left her with some less than desireable gear to complete Hell with (and even so she had to use some light/crystal blue equipment where she had no dark blue options), and to offset that I chose a very straightforward build for her. She started as FN/FO, but that changed to FO/FN over time as FO is just so powerful, and I didnt feel like waiting around all day for FN to kill stuff. Realistically it's a bit of a stretch to call her a FO/FN build at all, as she was basically pure FO once she got access to it. Okay, some stats:

Plus the obligatory 1 in Warmth, Tk, and Teleport (all considered 'uncoloured' for this sept)


Equipment
Helm: Gemmed Great Helm (Flawless Sapphire/Ral/Ort) - None of the S/U displayed well, so that's what she got in the end.
Armour: Silks of the Victor
Gloves: Hand of Broc
Belt: Credendum
Boots: Gorefoot
Amulet: Telling of Beads
Rings: N/A - No S/U options, and I was too lazy to gamble for any relevant affixes.
Weapon: Spectral Shard
Shield: N/A
Switch: N/A

I won't bother you with any gameplay notes here, as they are in the sept thread in full. If you want to read about her adventure and/or look at some of her gameplay screenshots, here are some links to her journey:
Normal
Nightmare
Hell

As always, I will leave a little catalogue of her progression of looks, from beginning through to her final form:

Starting out... not so blue: 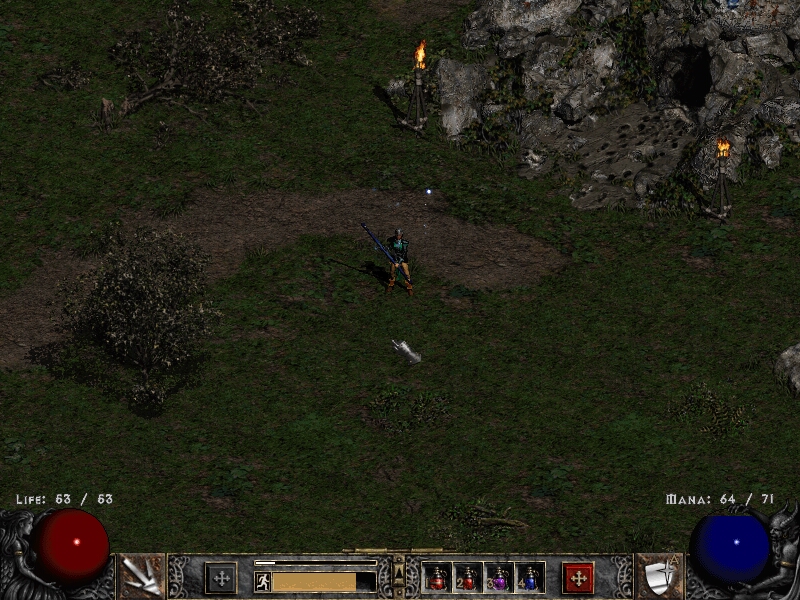 A shield and an actual armour helped things out a bit: 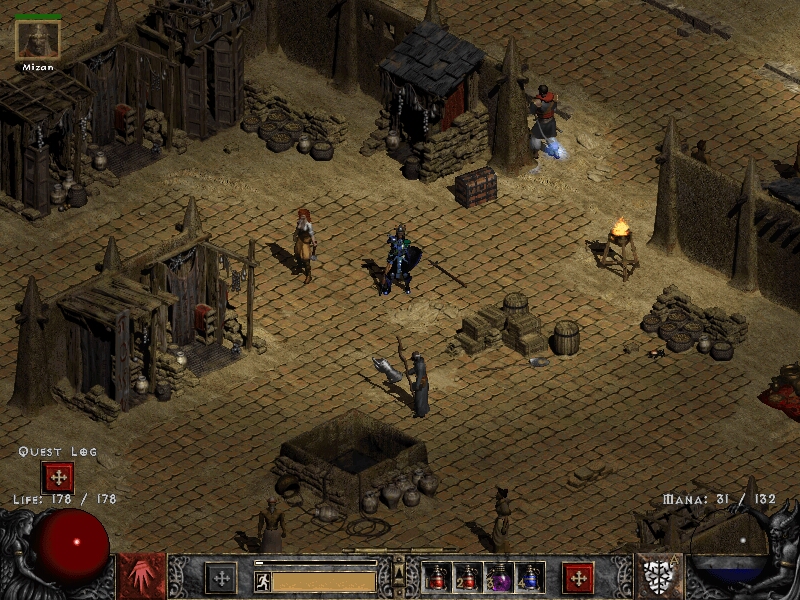 And then a proper weapon 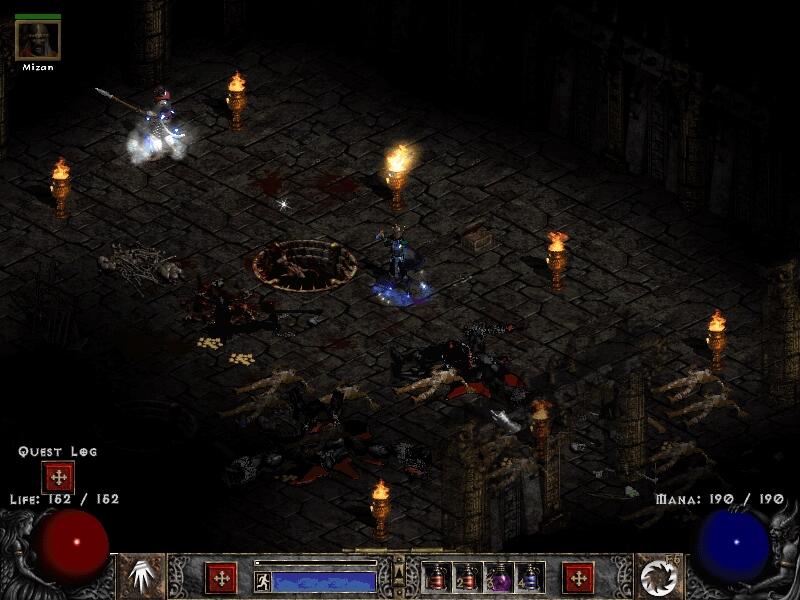 And finally her last piece of equipment (plus her final helm and armour) to complete her look: 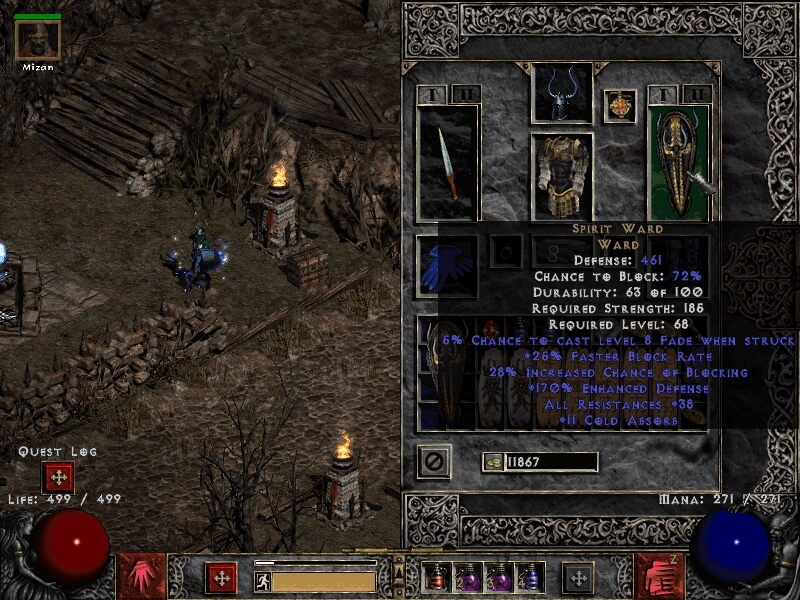 Other Notes and Final Thoughts

- She is one character I would have loved access to runewords and CtA, especially since BO is blue. 600 life in Hell is....dicey.

- The merc had Insight for Norm/NM but switched to Infinity for Hell to help break immunes and allow FO to steamroll more things.

- FO is great, but neither she nore the merc were strong enough to endure much in the way of tanking or trouble. Her gear wasn't really good enough to compensate for the lack of a second element (or even just Static would have been great)

- She was fun (I love FO, and it's so damn easy it's almost criminal) but a bit too fragile with her gearset, I definitely wouldn't recommend using this setup for a general playthrough.

You know the best way to avoid Frozen Orb being overpowered in a build? Just don't invest points into it. Have fun and drop the into Glacial Spike or something like that. Don't take the easy road, now.

Serdash said:
You know the best way to avoid Frozen Orb being overpowered in a build? Just don't invest points into it. Have fun and drop the into Glacial Spike or something like that. Don't take the easy road, now.

But Blizzard and Frozen Orb are synergies for Frost Nova.
Reactions: Serdash and Pb_pal

ioupain said:
But Blizzard and Frozen Orb are synergies for Frost Nova.
Click to expand...

So it's a weak will, then!
Reactions: Pb_pal and Grisu

Serdash said:
So it's a weak will, then!
Click to expand...

Well, @Pb_pal is doing an interesting project so I can't really agree with that. I'd rather say poor design from Blizzard's developers/designers.

ioupain said:
Well, @Pb_pal is doing an interesting project so I can't really agree with that. I'd rather say poor design from Blizzard's developers/designers.
Click to expand...

I'd be more forgiving if it were HC.
Reactions: ioupain and Pb_pal

Serdash said:
I'd be more forgiving if it were HC.
Click to expand...

Can't disagree with that!

I went looking for old video of a forum member that made a frost nova sorc, but couldn't find it, could only find a random video of someone random running AT:

Blame whoever designed the light armour displays for sorcs. Oh what could have been!

Cool vid though, but I don't think I'll be running a FN sorc in the next MFO
Reactions: Jocular, PhineasB and Swamigoon

Another nice and colorful Mat. I’ve really enjoyed following this project. Good luck on the last one!
Reactions: Pb_pal