It's a trap! - Artemis the PvP fire trapper

Yo, wazzzzup. After giving her a proper test drive, I've decided to finally open thread about one of my favorite and most enjoyable characters to play. Also, this is first thread I ever opened about my favorite class. Not for PvM normally, but because PvP I would name her favorite in front of otherwise too powerful barbs and sorcs. Artemis is fire trapper, and that is very rare sight in PvP. Not sure did someone have PvP fire trapper before in SPF, but I'm not aware of that. LS trappers are just too popular and fire trappers are in their shadow. There are few reasons why is that so. More about that later.

Why to name trapper Artemis, isn't she some kind of bow and arrows user from mythology? Indeed she is. But that is a trap, right? You join, opponents think you will use bow and arrows and then bam, traps everywhere. I kinda like the name, so named her like that for no other reason.

Maxing fire skills is a no brainer I'd say. WoF is your main killing weapon and Fireblast is for stomps.
I kinda experimented around, but this is what I finished liking the most. Good thing about fire trapper is you have plenty of skill points to assign wherever you want to. Most natural idea is to invest to clawblock to get to certain % (56 is lowest you should aim really), to maximize Mind Blast to have useful master who will spam it more frequently the higher level it is, and lastly into Fade to have nice DR%. I could have taken 1 point into Blade Shield, but I liked option of getting high DR% and damage instead. It is just too unreliable. I look to cast it from some future claw perhaps or to get LS skillpoint on claws and invest 1 into BS.

There are few goals I aimed to achieve by this skillpoint allocation. I wanted to maximize my damage output, have 1 point LS, have 50% DR with Ber Shako, have tons of skills into Mind Blast and have 58% clawblock.

I have built my trapper to be very flexible. She has 3 setups of which 1 is main, and 2 are side setups mostly to just mix things around for different playing experience, nothing more. Main setup includes 65 FCR and all the straightforward items as you will see. Other setup is 102+ FCR for higher fcr breakpoint when I wanna play like that. Third setup is 174 FCR with hoto and spirit, so no clawblock. Kinda fun setup and you spam mindblast like a maniac, but your effective life is much much lower cuz no clawblock. 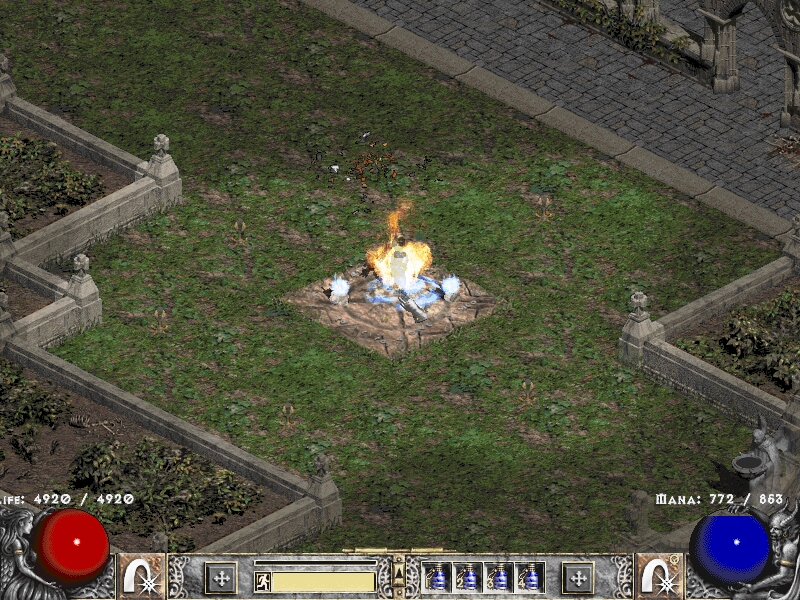 As you can see, kinda budget setup overall. Right. Pretty high end gear, it will be hard to find an improvement in anything. Obviously first claw can be improved, but good luck finding one that can do it.

Goal with gear is to hit 48 FHR breakpoint which is really what you should aim for with trapper, and to hit 65 FCR for teleporting. Everything else is already explained. Beta BKWB is flexible and I can remove it to lose some damage, 1% clawblock and 2% DR to get in Oak ring or Ravenfrost or something. I can say I never really replaced BKWB so far, so I don't see doing that in the future either. Only possibility is if I'm battling bowazon and I really want Ber Shako and using Trang Claws is not enough to counter cold damage from her attack. Only then I'd replace BKWB for Raven. Or, I could use Oak ring to get advantage in some matches if I really have to, but this trapper is strong enough to be able to deal with anything.

To achieve this, I have to replace Shako with 1.07 Cham Valk, use fcr ring instead of BKWB and replace one small charm with 5 fhr charm.

I have two options for secondary fcr ring. First one is which I prefer.

Obviously this setup offers higher fcr breakpoint, but at expense of damage and huge bulk of effective life. Is it worth it? I don't think so, but I still like to have this option for fun.

To get this, I replace claws with hoto/spirit and 2 fhr skillers with 2 life skillers.

This setup is unfinished. I'd use some circlet instead, but don't have anything close to good, so this is best I can do for now. This setup is fun, 174 breakpoint does spam like mad and trolls a lot. ^^


Stash gear:
Apart from mentioned items for 3 setups? I have few extra SCs with lite res just in case of stacking and that is it. I don't appreciate absorb on such tanks as assassins, so I don't plan on ever using it.

Improvement:
Find better claw I guess, but that will be hard. Having Vex and Lo Shako in stash is also improvement just in case, but as I said, I don't like using absorb on tankiest chars in diablo.

Since everyone has LS variant, WoF mechanic is not that known. First, facts. LS shots 10 missiles, WoF fires 5 meaning you have to recast them much more frequently (+ they fire faster). LS has 16 yards awareness range, WoF has 10. This means when you see LS at the edge of your screen, it will fire at you. WoF has to be inside your screen, even what feels like "close" to you to start firing at all. WoF fires almost twice faster than LS. LS missiles are much faster than WoF missiles, but LS missiles are narrow and easy to avoid if not too close, while WoF missiles you can avoid only by teleporting out or outrunning them.

Now very important part, WoF damage. You see that damage on LCS screen that I listed in this thread too? That is damage WoF is doing per one instance inside each shot, and each shot has 5 such instances. In theory, this means that, depending on positioning, WoF can do 5 times bigger damage per shot than listed. But, I never witnessed such situation. Most I witnessed is 3x as damage, but I have no idea how to position WoF to achieve that. WoF damage output is greatly nerfed with 4 frame delay between hits and that is the only reason why it is too hard to see more than 3 instances of damage per shot. Most of the time, and I mean "always", WoF will do 2 instances of damage per shot. So, If WoF does 50 pvp damage, that means that at average target takes 100 damage per each WoF shot for a total of 500 damage. Rarelly position is such target can take more than 2 instances of damage which can result in higher damage than that. If target moves around, it can result even in lower damage than that.

4 frame next delay greatly nerfs WoF and that also makes WoF to achieve potential maximum with 3 traps around target. If you plant 1 WoF under opponent, he will take 500 damage (let us assume). If you put 2 WoFs, will he take 1000 damage? No, he won't, because of next delay. He will take like 900-950 damage. Almost double, but not double. With 3 WoFs damage is already far from expected 1500. With 4 WoFs damage is pretty much similar. That is the curse of next delay. So, usually it is good to get 2 WoFs under opponent for somewhat maximum you can achieve with 3 WoFs only if you really have extra time, which you usually don't. LS does more damage because it is not nerfed with next delay, so you can spam them 4-5 at place and gogogogo.

One big difference between WoF and LS is also in visibility of traps. WoF is hard to see, sometimes really hard. LS you see from a mile.

With everything said, it is quite expected that people pick LS over WoF in pvp. They want range, they want bigger damage output. But, WoF has strategical advantage of stunning like crazy. Even LS trapper uses WoF for that, but difference is when WoF is your main trap, you use it all the time and stun effect is simply higher than what LS trapper can achieve. Normally, fire trapper also uses LS for stun on range. Range is never bad to have for that.

Another big reason is on bnet they don't really have this kind of rules we have here. There it is absorb gaming big time and WoF is easy to sorb with Rising Sun and Dwarf Star. Put those on and fire trapper can surrender. LS trapper is also absorbed big time, but her traps still do some damage and she can at least hope to campwhore. SPF is much more friendlier to such characters, so here you can try fire trapper with nice success. I have come across Waterwalk opponents, but it is nothing trapper can't handle. Dwarf is obviously harder to deal with, it would reduce your damage from 50 to ~32, or your damage output would be 56% lower in that case. Well, that could be annoying and hard, even too hard. But there is no way around that sadly. You can campwhore, your traps are nasty in close combat and let him come to you then.

WoF trapper is harder to play than LS, you have lower range, you have to be more active cuz your traps expire much faster and you have to recast more, and your damage output is lower. Reward, however, is you are annoying your opponent with a lot of stunning. Well, maybe fire trapper is not the strongest trapper around, but any well built trapper is very strong. I haven't notice that this trapper needs any help to deal with any opponent. She can be quite powerhouse as any trapper. So, don't be afraid to try that build, but be warned that you will have to work more for your kills.

If you battle fire trapper, don't underestimate her. I have seen people ignoring my wofs and taking damage without real purpose. WoF does hurt. I drop 2 WoFs under your feet and it will be 1k damage pain if you don't care to move away. WoF is not LS and you can't afford to stand too long in one place cuz it fires much faster and does much higher DPS than one LS.

I believe in offensive trapper playing style, and with fire trapper you have to go for it to kill something. You don't have range to spam traps mindlessly and hope to hit something. Everything said makes her my favorite character to play. Reliable, fun and strong is how I would describe her. And it's a TRAP!

Find a better claw and possibly other gear improvement, but mostly to play some PvP.

There are two videos with older variant of trapper. On first video it was 105 fcr variant, and on second she had 30% DR instead of 50% she has now, but she also had ~9% stronger damage output.