[HC Sept][Diary] Guardian AlreadyDead, summoning reminders of what should not be for himself

Hereby is announced the new HC necromancer amongst my babies, AlreadyDead! 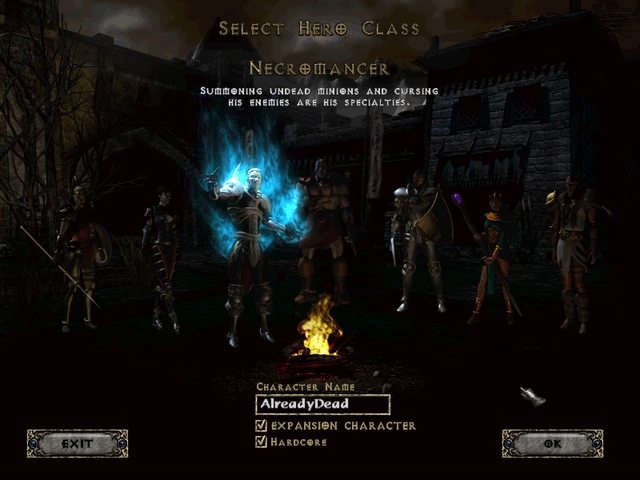 He is planned to be a classical summoner, surrounded by skellies (hence the thread name) and a clay golem, using amp/decrepify, making corpses explode later, and be the early MF character of the sept. And he will do that well I guess, already found a Gull on his first session (!), and may even get 300MF for Andy with lvl 18 and ptopazed helm/armor (5os total, 30 strength req), and break it with some Nagelrings as he may well run Andy a bit - maybe when he is stronger to make runs quicker, it is far from mandatory. 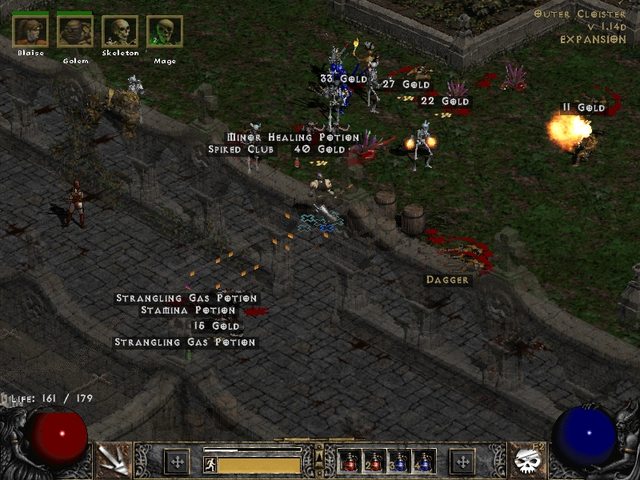 He is the necromancer that will try to kill Hell Baal for the HC Sept I planned for 2021, hopefully succeeding three characters this year.

Gearing
Start
Gull (or infernal torch if MF is not relevant anymore)
Arctic armor/belt for MF
Whatever MF stuff
Lvl 17+
PTopazed helm and breast plate
Sigon's shield
Whatever MF/poison res stuff
Lvl 29+
SoJ
(If possible Vipermagi...but I don't have one!)
SCs of good luck
A nice shrunken head with Rhyme...not found yet. So any Rhyme will do!
Lvl 42+
Eth Skullder's ire
Skillers (2...As many as possible!)
Lvl 63+/endgame gear
CoH
Hoto
Hopefully a good rare shrunken head or better the Homunculus...not found yet!

Skill trees
Poison and Bones
Get corpse explosion for act 2, by lvl 16/17! (2 points)
Curses
Amp damage at start, then grab decrepify (4 points)
Summoning
One point in clay golem, and get summon resistances (3 points)
Get the skellies, only one or two point in mages and count on stuff afterwards, better rise the skeletons and mastery somehow balanced (one point in mastery at start, then get 3 or 4 skellies before putting more points in mastery, then keep them balanced - see Pet calculator link below) (all remaining points)

Good to see you transfer to HC!
Reactions: Babyhell

That's not a transfer, I go both sides, as you can see in My babies' thread

Already made a paladin Guardian, now I target two more this year, and a complete Sept next year. Alongside with SC runners and tournaments!

Getting the staff had been a real pain... those small corridors completely annihilate the pets' power, at best two are fighting at the same time. On top of that I haven't pick Corpse explosion yet, so it clearly doesn't help...this and the Duriel fights wil be the most complicated on each difficulty I guess.

Anyway, still alive - no issues as I went for 30 strength then full vita - and not using any +skills yet, I stay on the Gull main even if I have an infernal torch equipped on switch.

After another session in the Pits, I went back to AlreadyDead to check twinking stuff available.

Using Vidala's boots and amulet bring 50MF.
Gloves are random rare ones with 12MF.
Rings are magic 14 and 20 MF.
Belt has no MF, will use Goldwrap asap.
Shield has no MF yet, waiting for a Rhyme one.
Weapon is Gull for 100MF, helm is 2os Ptopazed (48MF) and armor is 3os breast plate Ptopazed (72MF).

Inventory contains only one 5 MF for now.

Planned to be used by the end of Normal leveling:
Goldwrap 30MF
Eth Skullder's - MF and skillpoint, will socket it with Ptopaz using normal quest
Rhyme shield 25MF
Some 6MF Scs
One summoning skiller with 4dex

Will run for 25+ Nagelrings after leveling in Normal.

In the end he shall start NM with around 400MF. Nice!

Questing in act 3, searching for the last organ in the sewers, almost lvl 26.

End of act 2 had been ran on p5. Already, the p8 is not doable, probably due to MF only twinking. Ran a bit to get to lvl 24 before Duriel, to unlock Decrepify, and put the point in Summon resistances. It required a portal to rebuild some summons, on p3, but I thought it would be worse (the 4s duration don't help either).

Now it will be time to max the summons themselves with the skelly mastery, and see how I will handle the Council.

I have to upgrade merc stuff also, he is still with lvl 8 req weapon, no life leech, so it can be annoying, even if he is still the truck when hitting. Compared to the other ones, I mean...

Bosses are a real pain, especially Mephisto and Diablo that could almost if not one shot the merc, who is the real damage dealer since his new weapon (Insight in an ethereal partizan, that rolled 17aura/246ed iirc, usable thanks to a flawless amethysts socketed 2os helm).

Will try to keep on p3 or p5 for questing, but bosses will be dropped to p1, it is a waste of so much gold for the little time needed for the merc to handle it when he finally can poke the guy.

Will start to replace also MF stuff - already done for the amulet and a ring, undead crown will help a bit to toughen the skellies, and skill points when possible also. Sigon's shield will be useful for that I guess, until I get some shrunken head of interest. End of Normal will be all about leveling anyway...

Lvl 37 hit while running Pindle p7, after saving Anya, all questing done on p5. I may push him a level more before heading to Ancients/Baal.

Found a Manald, Lance of Yaggai... well, no noteworthy/usable stuff right there, but welcomed xp grinding before heading to Ancients and unlock lvl 42 stuff.

Merc is now wearing a Stealskull (the helm with MF and dual leech - 43 MF for this one), as his strength now allows him to wear the Insight without the strength socketed helm.

Larzuk's quest had been used on the Ethereal Skullder's ire, socketed with a PTopaz, waiting for lvl 42, alongside with the two summoning skillers (one plain, one with +4 strength). Hope to find more or trade for more (and a Shako/Harlequin Crest), but on that last point I'm counting on you

Also, added a Gearing/Skilling progression in the first post

Destroyer at lvl 45+, after pushing at Pindle until lvl 42 to unlock skillers and Skullder's Leveled a bit more this morning, now 50.

Planning to push up to 60+ at Baal before entering Nightmare. 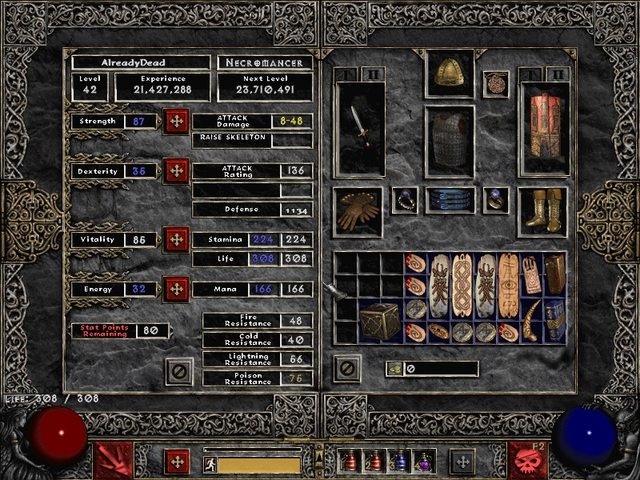 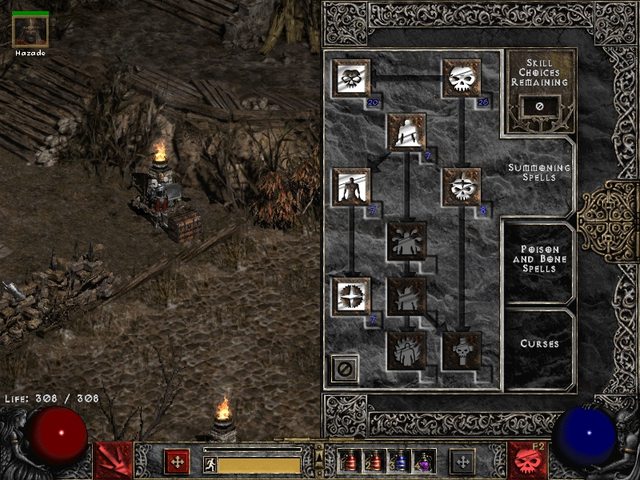 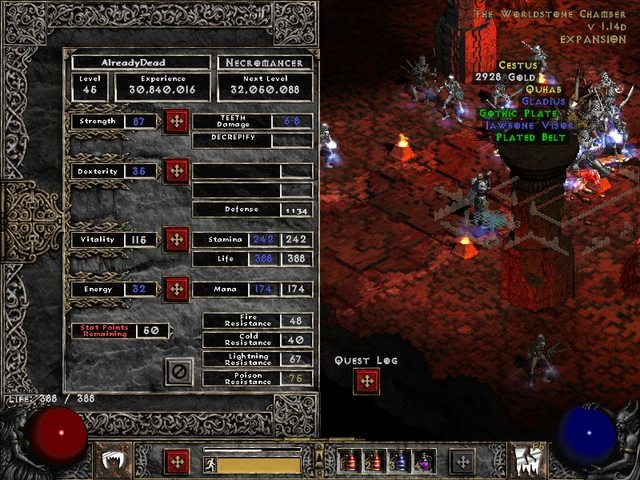 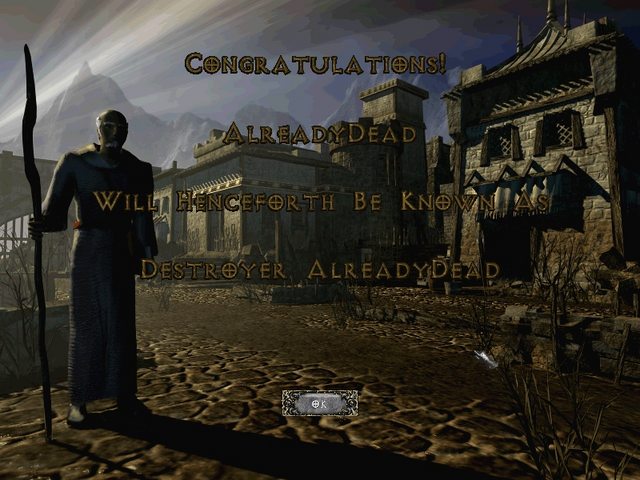 See you on next update!
Reactions: John Remedy and Talman
T

Spend those freaking stattpoints! What exatly would u like to find to need 130 strx?
Reactions: Babyhell

Tears85 said:
Spend those freaking stattpoints! What exatly would u like to find to need 130 strx?
Click to expand...

For real? Nothing. I may use my Archon Plate CoH late game instead of the Skullder's, so it brings it to 103, I won't see any need higher, I may not go for a spirit shield, but use a Homonculus...if I find some!
T

"For real? Nothing." That´s my point! Those 50 stats are 33% more life, and u´ll never need them for strx!
Reactions: Babyhell

Right I will spend them by the end of Normal leveling - for real I have no use for that extra life in Normal, I'd better getter FHR, but I promise you I will not have any point left at that stage I owe you a screenshot!
Reactions: Tears85

Yesterday evening, AlreadyDead leveled up doing Baal runs. He ended lvl 61, not sure I will give him a level more before jumping into nightmare...if only I had a Shako! #AnotherCouncilHope

You leveled to 61 on Normal Baal I'm usually entering Hell at this point 😂
Reactions: D2DC and Babyhell

b1ur said:
You leveled to 61 on Normal Baal I'm usually entering Hell at this point 😂
Click to expand...

In HC ?! Holy...err...congrats? I'm not used to HC enough i guess. Usually I overlevel up to 60 in Normal, around 75 in nightmare, so in HC I was pushing a bit more

Well, technically 62 to equip Harly or 65 to equip Enigma, but yeah. If I'm trying to get the questing done as quickly as possible I usually end up at 65 in Hell and at ~75 at Guardian. Some characters require a bit more, some a bit less but unless I'm playing a themed or special build I rarely finish the game after 80. Example.

I would definitely go a tad slower if I am untwinked mainly to get stuff from NM Andy/Meph but I usually don't bother leveling much. Probably why I only die when questing
Reactions: Babyhell
T 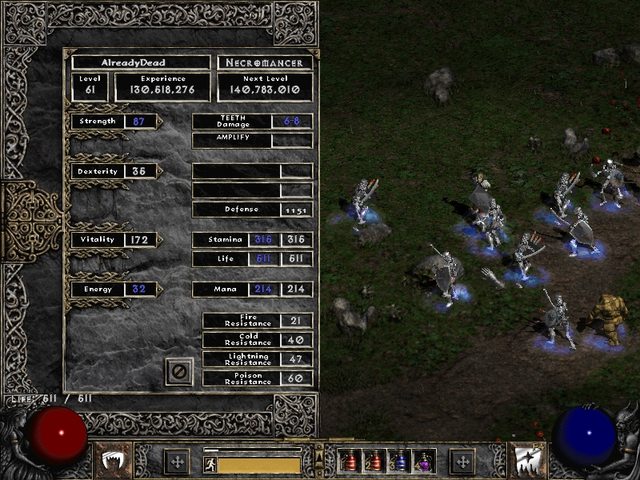 b1ur said:
Well, technically 62 to equip Harly or 65 to equip Enigma, but yeah. If I'm trying to get the questing done as quickly as possible I usually end up at 65 in Hell and at ~75 at Guardian. Some characters require a bit more, some a bit less but unless I'm playing a themed or special build I rarely finish the game after 80. Example.

I would definitely go a tad slower if I am untwinked mainly to get stuff from NM Andy/Meph but I usually don't bother leveling much. Probably why I only die when questing
Click to expand...

This Nutella's rare ammy had (has?) a shtload of stats!!!