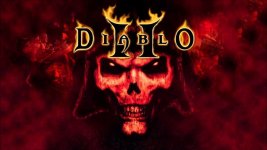 Diablo creators Erich Schaefer and David Brevik discuss the evolution of loot in videogames in a new edition of the Splitscreen podcast.

Diablo was pretty much responsible for the loot genre of videogames, it's what kept us playing after all these years. Since then loot has become so important in videogames and these guys helped pioneer the concept of loot-driven gameplay.

David and Erich discuss how and why they created the loot system in Diablo and Diablo 2. They also talk about other aspects of the first two games that have influenced today's modern games.

Erich also mentions he played D2R this past weekend and he says he still got a kick out of his first ring drop. Even the creators still get the buzz.

The podcast lasts for around an hour and you can listen to it now over on Kotaku.
Reactions: superdave
Click to expand...