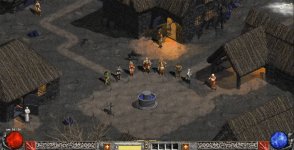 There's been a PvP Diablo 2 mod that's been in development for a while called Leoric's Castle and it will finally be fully released today.

If you've not heard of it, it's a 4v4 PvP game where players fight it out in Leoric's Castle against other players and bosses. Players then have to go and takedown Leoric himself.

The mod will be launching today at 10AM EST and is available for download from the mod's website. Here's a trailer that should give you an idea of what to expect.

As someone who doesn't really partake in PvP, this actually looks like it could be quite fun. It will also be interesting to see how it looks and will work in D2R with its improved visuals.

Sounds interesting, even if I'm not into PvP either. But now this is an area of D2 which has been sorely lacking mods and where so much can probably be done. Simply the idea of creating and balancing skills for PvP rather than PvE. If the modmaker can completely disregard the PvE gameplay and fully focus on PvP, that ought to enable a kind of gameplay that Blizzard couldn't do. And this isn't even going into reshaping the game for PvP modes.
Reactions: Rush
You must log in or register to reply here.
Share:
Facebook Twitter Reddit Pinterest Tumblr WhatsApp Email Share Link
Remove ads & support the site - Get PurePremium
Top Bottom