With the advent of D2R, I thought it would be a good idea to have a place for casual discussion of all aspects of the new game. We already have the news roundup, and the poll, and of course people can make threads relating to whatever topic they please, however often I feel as though I would like a more casual space to discuss any events, playthroughs, weird finds, small questions, general excitement, or just talking with friends, etc - that doesn't really fit anywhere else or you don't feel comfortable posting on your own.

My main motivation for this thread is that I want to hear all of you chatting about your new adventures in D2R! I want to hear every moment of joy and every detail from people's experience. This is a moment for which so many of us have been waiting for so long, and it's here now. Playing single player in 60+ fps, updated graphics. What curious bugs or inadvertently changed mechanics lurk waiting to be discovered? What will future patches bring? Find out next time on Dragon Ball Z! The drama is unfolding in front of us friends and we are all here to experience it.

Let's have a great time and share with each other. Anything you want to post, please feel absolutely free to post it here.
Reactions: Friiser, ziambe, maxicek and 2 others

Okay so I know I just made this thread but I wanted to make a separate post. I am so hyped for this launch. I have been playing D2 pretty much non-stop for a month during this lead up to the release, and I have been thinking and thinking about it, reading every single bit of news, checking reddit in the bathroom at every opportunity, reading the forum etc. And I still have no idea what my actual plans are for playing this game.

I think it would be kind of fun to start fresh for fun for a fresh start - just crack out a sorc quick, do some nm meph farm, do some hell meph farm, live my life in LK and refarm enigma/infinity etc, since it is a new thing after all. I've been doing baals on my 99er sorc (currently still shamefully level 97), but I just think will it feel weird to just transfer over and keep on keepin on on that guy? I feel like I almost should start fresh. But then of course the grind is so real.. The charm grind is my worst nightmare about all of this, I feel comfy farming up infinity again and getting the other pieces of the puzzle, but the CHARMS. Ugh. I'd wanna farm up 8 lightning skillers at least along with random resist small charms (less worried about those). Not sure I want to go through that all again. Plus I'd have to leave my favorite items behind... But at the same time there's no better time to do it, fresh start.

Also.. anyone got any plans of running any tournaments or anything? Is there any interest in a fresh 99er thread or a race to 99 in D2R? I'm curious if any of you regulars here have discussed things like that, I don't follow every thread super closely.
Reactions: John Remedy, Friiser, HanShotFirst and 1 other person

I feel like a kid again, its been a long time since i had this much anticipation for a game. Will be a long work day for sure tomorrow but i cant wait to start tinkering with this game all over again and posting on here along with you all. I will be playing SP SSF exclusively.

May your drops be plenty and your runes be high!
Reactions: John Remedy, ziambe and NorthDakota

Dudzy said:
Will be a long work day for sure tomorrow
Click to expand...

Dude I feel you there, I have a full long 10 hour day both tomorrow and Friday and I'm DYING. My wife is going to have all kinds of ideas for the weekend as well, so I'm just hoping to find some alone time early morning or late night where I can sit down and get some quality time drinking it in. Got some good coffee in preparation for a relaxing morning session and some good (in my opinion) whiskey for the late night sessions XD
Reactions: ziambe, Miron and Dudzy

I too am in a state of peak excitement!

I've upgraded the computer, updated the drivers, and preloaded the game! It's now the final countdown for sure!

After much deliberation, I've decided that I'm going to start fresh and resist the urge to transfer items or characters from D2 to D2R. I don't mind (re)finding most things. For me, the item that I am least looking forward to hunting down again is 45 resist all paladin shields. I've got quite the collection of them after 18k LK runs in 1.11b ... resisting the urge to forward some could be hard ... but I think I can do it.

Like @NorthDakota I've been having trouble deciding what to do first. A single pass, full clear, tournament character has a lot of appeal but I think I'm going to do something a bit more free form. I've pretty much settled on starting with a softcore magic finding Sorceress that can round up the essentials and then do some LK. From there I'll make a character that can farm keys, and then another to run Ubers and Pandemonium Diablo!

The anticipation is intense!

NorthDakota said:
.
Also.. anyone got any plans of running any tournaments or anything? Is there any interest in a fresh 99er thread or a race to 99 in D2R? I'm curious if any of you regulars here have discussed things like that, I don't follow every thread super closely.
Click to expand...

No plans to join/start any tournaments but can already suggest new ones :

I'm thinking about making a trapsin, never played a ton of sin and with the trap bug being fixed seems like a good time.

Just gonna take my time and enjoy the first few builds though! Gonna get way more into this then I did back in the day.

I am probably going to play on Bnet to start out with. Looking forward to it as well.

Anyone know whether 1.07 Raven Claw still works? My plan is to start new toons, but with my old leveling gear.

I'm actually not even planning to play for a couple of weeks because of other gaming events, starting tomorrow, so I'll get a few hours tonight if I can finish work up in time

I'll probably start with a trapsin or a zealot.

I think I want to start fresh with D2R, at least in the beginning. I want to see it all and at my own pace.
Reactions: NorthDakota 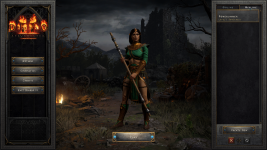 Nice! My options are all set up and ready to go. Gonna wait for Vang to create the Random Tourney b4 I ring the opening bell though...

Running around with a Necro, gambled a +1 skill item already.

Sadly, time to get ready for work.
Reactions: Pb_pal

I AM BACK BITCHES HAHAHA!

Save and exit times are preposterous. Gonna make target farming fast targets like Pindle a lot slower. Game creation is slower but not bad.

Do the connection issues affect offline characters at all?

It's great seeing so many familiar names coming back!

BTW: I liked your old avatar.

Edit: @Sid - I played right through it (offline) ... didn't know there was an issue. I tried going back to my offline character just now ... no problems.

NorthDakota said:
Save and exit times are preposterous. Gonna make target farming fast targets like Pindle a lot slower. Game creation is slower but not bad.
Click to expand...