Unfortunately this is the sight that greeted our fateful brothers upon entering the WSK. UGH. Man I hate those things. 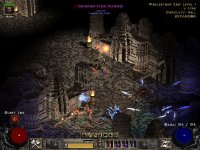 We rolled Frenzytaurs too in WSK1 but they didn't pose much trouble, actually. 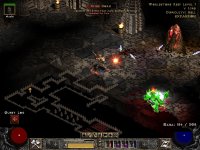 I got a grailer here after picking through the bodies of some of those awful hag burpers. My first lightning facet (that I recall at least; my HC stash has two cold and two poison ones and I don't remember ever using any). 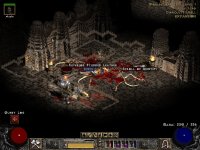 We ran around in one hallway in this level while amped, and a bunch of those stupid hag pups almost killed Magnus. My youngest son was watching me play, although he wasn't paying attention to the life bulb so he wasn't aware how close we came to losing. There was some red in the life bulb when Magnus drank the purple and got out of dodge, but not more than another hit or two. Phew!

WSK 2 had Black Souls and WSK 3 had Oblivion Knights, so there was fun dodging and entertaining combat. The ToD had our final stairs trap, with two packs of Oblivion Knights (one was champions) with their entourages of Doom Knights caused us a bit of a panic at the beginning. Here's my best shot of it. I took this shot after running around and stirring up the champions, who were still in the other explored corner by the stairs. 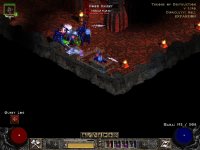 Magnus Taunted the crap out of the minions, except of course Lister's pack, but they didn't seem difficult at all. In a few instances we stood behind Alcuin while he swung away at the demons like a madman. They went down surprisingly fast. 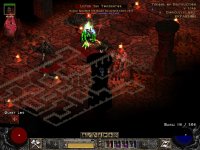 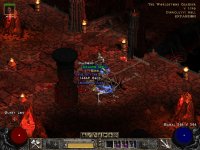 Before they felled him, Alcuin put back his MF helm and Ali Baba back on, but forgot his MF amulet, instead wearing the Mahim Curio the entire fight. Regardless, his drop was better than any others except for hell Meph (who dropped the Demon Limb). It wasn't a grailer but is the better of the two I've found in 20 years of playing this silly game. The MF total was 72+16+30+29+23+84+4+4+5 so 267%. Alcuin wasn't wearing any MF gear any longer, but he could have replaced his circlet if needed. I didn't really see a need, and the circlet gave him 30% FRW, 8% LL and a hefty +59 life.

Alcuin used the Voice of Reason balrog blade for most of the game once he found the ingredients, only using the strength for Diablo and Baal. He used the Treachery cuirass as soon as he had the ingredients for that, and it improved his kill speed pretty greatly. Al got probably 2/3 of the kills between the two brothers.

Magnus stuck with his MF helm almost exclusively, only using the Blackhorn's a couple of times. Against all bosses except hell diablo, he put away his throwing axes and put on his flails for hefty double swinging with 48% CB (on the black weapon) and 50% slow. He used some form of Smoke armor after he got a couple of lums, and made his first one at the end of NM. His amulets were mostly a 20%MF, 12% all res, and he switched out with a Mahim Curio when he needed the strength to use the Demon Limb every 11 or so minutes. His gloves were crafted blood and had 8% CB and 16% MF and some dex and 23% LR. His belt was usually a nice rare with +15 strength, dual lightning and fire resist and 24% FHR, though he did switch to Goldwrap after rescuing Anya, except again when he needed the strength to use the Demon Limb. His weapons were the cruel/amp/undead killing hurlbat and the fools/grinding winged axe and an echoing throwing spear and ali baba on switch for horking, which was 98% of all monsters.

For this amount of horking and MF, I really expected Magnus to find more than he did, but we made it with the gear we had and we got enough to survive, if not even thrive a little. Alcuin probably died about 10 times, so not too bad, although if you ask him he'd say they were not all painless and quick.

We stopped just a hair shy of level 85, I have no idea if the cows would get us over the hump but they were not very fun in NM so I'll defer in hell and leave him at 84 for now. We had two socket quests left, maybe I'll save them for future use. Oh who are we kidding, I'll forget they exist.

Congrats @OldSoldier Very nice write up of the final stretch, and that AR is staggering Congrats on the Guardian, and the double throw success!
N

Congrats @OldSoldier! Any tournament Guardian is a major achievement, but doing it with double-throw is extra stylish!

Lars has completed Act 1 and is resting up before proceeding into the sewers. Killing speed was slow through the start of the act, but not so bad that I started to lose interest. We picked up our first Sol rune pretty early on in the Cold Plains, which meant we had the ingredients to upgrade the Generals Tan Do Li Ga but would have to wait until a good muling spot to bring in the the rest of the ingredients. I was worried about Cold Crow since kill speed while chilled is not good, but we were able to taunt her minions out 1 by 1 and take her on alone. I got excited when she dropped a rare Two Handed Sword, and double-excited when we ID'd it. 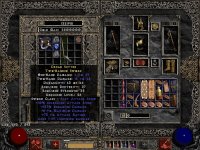 We had picked up our third Amn of the journey earlier in the Cave Level 2, so we also had the ingredients to upgrade this to an Espandon. We finished clearing out the rest of the cave, and then took a muling and gearing break (I forgot to take the screenshot of the sword until after muling which is why the stuff to upgrade is in the stash). We had found our second gem shrine of the play through in the Cave Level 1 so we were finally able to finish our 3 PTopaz helm. Since Lief is doing the vast majority our killing these days, I gave him this helmet and equipped the 3soc FI helm on Lars. Currently it only has 2 flawless topazes socketed, but this gets us to 169/268 MF, so not bad for where we are. Figured better to get the increased MF now and use future PTopazes to finish it and socket a 4 soc gothic plate, assuming one drops for us.

I upgraded the Generals Tan Do Li Ga to a Knout, which should help some. Lars isn't killing anything anymore but I do hit all the monsters to apply the slowing so it's nice for those to be a little more damaging. I also upgraded the Dread Scythe to an Espandon, and equipped it on Lief. Listed damage looks much better now, though we'll see if survivability for him becomes an issue without LL anymore. 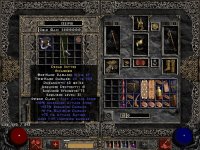 Blood Raven wasn't hard but took ages to bring down. This would start to become the main theme of the journey, where it was never that dangerous as long as Lars was careful but kill speed was really dragging. 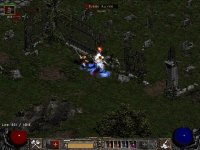 We picked up another Sol in the Stony Field, as well as a 4 socket partizan. I feel like I never find 4 socket polearms when I wanted them for regular questing characters, so of course we got an early one in a great base on this play through when we didn't need it. Hold this thought, as this will become important later.

We scored another Amn in Tristram and were super excited that we could create a Spirit in our broadsword only to discover that we don't actually have a Thul rune yet... We do have 3 Orts stashed, so an Ort/Thul would complete this. I cleared all of Tristram, which was awful as the champion pack was Shamans and it was tough to bring them down. We were eventually able to pull it off with liberal use of Howl and horking any fallen that Lief killed before they could be resurrected. We finally got through and only had Griswold left, and that fight kind of broke my desire to keep going down the Bow/Double Swing path I'm currently on. It took sooooooo long with our miniscule damage.

I didn't really see any good options at this point to increase our damage output so I was looking at either continuing to slog through on P8 and not enjoying the play through or dropping the player settings. I have a tendency to burn out on D2 if it stops being fun, and Lars was getting dangerously close to that point. I was looking through what I had stashed when I remembered the partizan, and the Sol, and realized I could make an Insight right now. A quick refresher of the rules meant I could burn my one respec if I wanted. I was looking for a new build where I could scale damage through skills, and that preferably wouldn't require having to find multiple high damage weapons. A two handed Nightfish berserker fit what I was looking for, and with an Insight in hand in Act 1 NM, I got excited to continue playing. After pulling the trigger on the respect and building our Insight, Lars is looking fresh! 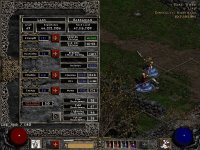 Gameplay is so much more satisfying again! Lars can actually contribute damage wise again, though he does spend most of his time casting. Insight is actually really nice for this, as War Cry eats mana when it only stuns for 2.6 seconds. General gameplay now is to War Cry everything close, then Battle Cry, then War Cry every 2 seconds to keep things stunned. Ranged attackers get Taunted in and then stunned when close. Tough bosses get pinned against something via Lars 1 point in Leap, though we'd like to have a slightly better leap radius as you have to be right on top of the boss to knock them back right now, which isn't fun when they are FE or LE.

Lars had been horking every dead body so far with nothing to show for it (though once again Insight horking is really fun!) until the pits level 1, when we scored a Lum off a hork! This could make a nice Smoke at some point, especially since Old Soldier just guardianed using Smoke as his armor. 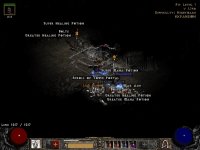 A few battle screen shots. This double pack of skellie mages wasn't that fun. The Smith was a push over. 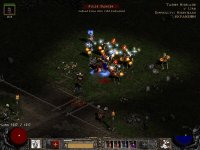 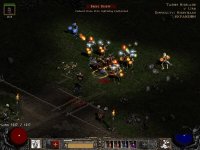 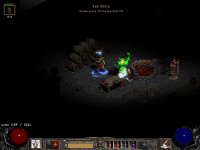 Took a muling break at the Inner Cloister WP so Lars could build Spirit in the broadsword we had found after horking a Thul in the Jail Level 1. That was paired with a +1WC war axe from Normal to give us some much much appreciated extra BO levels. This will be our new FI switch as well, as I believe the extra levels of FI are more helpful than losing the MF from Insight.

Pretty quick progress through the rest of the act, though we had an NDE in the Catacombs level 3 when we ran into what I thought was an empty room only to find a boss pack of lightning apes and undead fireball caster guys. Got amped and took 2 quick hits which almost ended Lars. I was able to pot in time and then bail from the room, but couldn't separate the bosses from each other so Lief and Lars had to fight them at the same time. Burned through all of our super healers but ended up victorious.

Andy took a few resurrections and a bunch of pots but ultimately wasn't dangerous. The drop had green and gold, but nothing useful to us. Lars actually hit level 53 on the Andy kill. 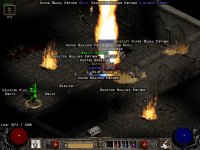