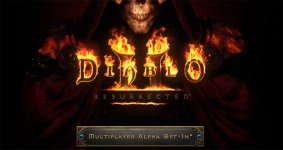 The official Diablo 2 site Alpha opt-in button is now sporting a new look (see image on the right). The button has now changed to Multiplayer Alpha Opt-in which could mean that the next phase might be sooner than expected. Oddly enough, if you had opted-in previously it lets you opt-in again so not sure what's going on there. Testers usually move into the next phase by default. Perhaps this is some temporary change or update.

It's also worth pointing out that they are also testing a Beta as indicated by the latest updates on BlizzTracker. 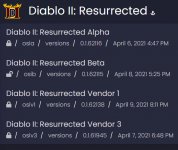 What is being coined as multiplayer alpha could end up as a multiplayer beta. It's hard to tell what they are planning but we know they have two tests in the pipeline at least. Perhaps a scaled-down multi-player alpha first then a larger multiplayer beta to follow. We'll have to wait and see.

On a similar note, the Korean Alpha time period for testing appears to have been extended to June. While this first tech alpha will close on 12 April, this timeframe extension could allow another test to run prior to 12 June.

With no definitive release date having been announced, all we know is that they are hoping for a December release at the latest. Perhaps if all goes to plan we'll see it arrive earlier in the autumn. Fingers crossed.
Last edited: Apr 11, 2021
Reactions: Jocular
Click to expand...