@MizzouFTW yes. @art_vandelay was doing this and had some nice results iirc.

what can spawn with lvlreq 1?

What would you recommend to socket in a Upped Hone Sundan (Its not Eth but its a SP Walk)? I figure the choices are Shaels, Amns, and Ums. I have a Treachery on my merc so thats 45ias to start. I was thinking just 3 Shael it but maybe 2 Shaels and an Amn? I haven't found a Tals yet.
Last edited: Dec 22, 2020

If you don't have Undead crown or wormskull (or better ll helms) I think amn-rune is set in stone, after all he has to leech

LizardSike said:
What would you recommend to socket in a Upped Hone Sundan (Its not Eth but its a SP Walk)? I figure the choices are Shaels, Amns, and Ums. I have a Treachery on my merc so thats 45ias to start. I was thinking just 3 Shael it but maybe 2 Shaels and an Amn? I haven't found a Tals yet.
Click to expand...

Shael Amn Amn would bring you to a next BP with Treachery, with decent leech.
Reactions: Swamigoon

saracen85 said:
Shael Amn Amn would bring you to a next BP with Treachery, with decent leech.
Click to expand...

Yeah after looking at the breakpoints from D2Lover this looks like what I'm going to do for now. Thanks!

What to socket in this one?


Code:
will be used on a tornado druid with spirit/hoto/enigma(if i find a Jah)

What you think?
Reactions: Swamigoon

Played through normal until act 5 beginning with twinking gear on my amazone.

You can even fight Diablo with it, because he has only 33% fire resi (looked it up before i cleared CS)
E 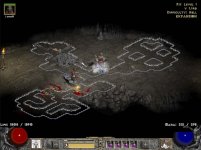 Still assessing how many boss packs there are but never seen anything this small before...

is the small pocket in the middle a shamancamp?

which character can run the pits without enigma, but infinity ready?

can tele to the pits with naijs staff, and want to clear it at p3 probably

also no cta yet

d2lover said:
which character can run the pits without enigma, but infinity ready?
Click to expand...

Any Sorc builds, especially Lightning ones.

Apart from that, Lightning Javazons. They're horrible teleporters anyway.
E

Yes regarding small pocket. Super dense and up to two boss packs there, but mostly none. I usually just stand at the entrance, howl and wait a few secs to see if anything is there. If I go in deeper, the merc starts killing things and horking any eventual unique/champion becomes more of a chore.

Furthermore, the right-most portion is mostly devoid of packs once it widens. I have been just tele'ing to that first small square where there is a well and usually a spawn. One to four packs in that narrow section on the way. Some backtracking to get back to the Lvl2 leg, but not too bad.

@Oskros' new run counter is indicating 8.34 packs per run. My times are ugly right now as I figure out how best to run it, but I just realized that the Black Marsh waypoint is closer to the entrance than Outer Cloister. Run times should get better for that one reason.

Edit. Here is the Black Marsh waypoint relative to entrance: 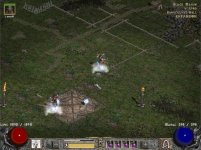 @EatSleepDiablo very nice. Yeah thats a 4 tile nonlinear map, and for some reason they often seem smaller than 4 tile linear maps. I kinda think of them as like "equivalent" to a 5-tile linear map since you sorta have to teleport through one of the tiles twice (the one you have to backtrack in). And since the smaller size mean less likelihood of a good boss count, I had pretty mush decided to stop evaluating them. But funny enough I decided to test one anyways yesterday with my javazon and am getting like 8.2 packs, which I would say is a keeper (and ofc if 8.36 stays high for you, yours is a keeper too, and a nice black marsh approach to boot). Lol insta-dweb. I'm jealous.

what is the optimal river of flame map (only the way to the CS)?

for a bowie without tele

but it has to be different weaponclasses, then 1 point into every lvl 1 mastery and pump frenzy synergy instead(gives more damage, but no AR/CS)

Definitely works. Have done axe/mace frenzy, was 'Oath' Small Crescent/Rare upped to Legendary Mallet. I WSM-bugged to get decent attack speed before Frenzy charged up, which I wouldn't reccomend unless you can 'auto bug' by getting +str or +dex on the 'offhand primary' slot... it's annoying, and not intuitive at all otherwise. I did invest into both Masteries, but don't think not doing so would hamper anything to any degree. Biggest thing I ran afoul of is needing to watch the range of your weapons, particularly with a hammer (range1) for one of your weapons, especially if it's secondary, and longer range weapon (like Berserker Axe, range3) is primary. First swing will land, but second will whiff, due to not being close enough. PB will probably work better (range2), but best would be to just make sure your shorter range weapon is primary, making it much less of an issue.

If you had considered all this, then disregard and enjoy... I certainly did, even with all my mistakes and problems along the way.
Reactions: Zyr and d2lover

@d2lover to add to good feedback from @zemaj I did a frenzier in my 7x7 with a hodgepodge of weapons, and I put 1 point in each of three masteries for the weapons he used. Details as in this post, and my recollection is that he was plenty powerful and plenty fun

Original post August 26, 2016 I just Pat-ted the last character in the 7 x 7 project that I started a few years ago. I opened this thread to motivate myself to write up the journey. * * * A little background: I started playing in 2005/2006. My first character was pretty sad – a barb with...

already have a 5s superior phaseblade for that, just short of a 2 Lo-runes (for forti/grief)

have a wc/goldfind skiller cubed, but i like to attack, rather than sing, haha

but if it's good i'll try it out someday

What are all enemies in Nilathak runs that make elemental damage?

Just asking what resistances are important.

Merc won't kill anything cuz runs are on p8 (he will wear Lawbringer PB) and I wear the RIP-ring, so I don't need fireres I guess?