PhineasB said:
Oct 9/10 should work for me, and I think allow time to level to 79 for a Wolfbarb.
Click to expand...

Ah, only hell? Can't get a barb that old before next weekend, but glhf everyone

maxicek said:
9/10 Oct is the earliest I can do. AFter that is OK too, there is no rush for me.

Any idea what the best Merc setup is for Lawbringer?
Lawbringer (What base?) + Arreat's + Fortitude?

Not sure I have ever used a Barb Merc outside of 1.07
Click to expand...

I matted a barb themed assassin not long ago. Here is a snippet from that thread:

However, at the time, I didn't know that 1-hander damage is doubled. That merc was not very useful, so this is a lesson in what not to do.


Code:
I'm currently leveling a PSer, but I can put that on hold for a bit. I do have a barbarian parked, but he's already completed act 1.

I'm thinking either a pure crier or a frenzier with dual Crescent Moon for AOE Static.

Also, I'm pretty sure that the +DAM on Grief does not get doubled for the act 5 merc. I'll probably put a Death CB on the merc.

Edit: Ooooooh, I could use my sick barb caster ammy to hit a good BP with Warcry. Welp, that's it then, I think. Now, to find a fun name. Buble? Nope, it's Freddie.

More edit: this means that I'll wield Insight on switch, so mana shouldn't be a problem for the group, for the most part. I think that with Mana Leech mobs, and I can stand by and just be the mana dude.

Further edit: Can I use an act 2 merc for levelling purposes? Of course, I'll switch to a barb for the MP.
Last edited: Oct 2, 2021
Reactions: d2lover, D2DC, PhineasB and 1 other person

You can level however you want, mine will WW with an A2 Merc until he can equip Tomb Reaver, then respec.
Reactions: d2lover and snickersnack

Tried a handful of Naga 1.07 crafts, but anything better had a higher lvl req.. Still can't beat a plain old 'Honor' Naga, but whatcha gonna do? 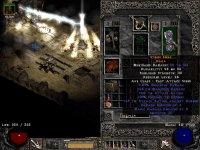 He also managed to find one of the best lvl 6 rings I've ever seen!

Maybe that 2 energy could have been STR, but I'm not complaining! 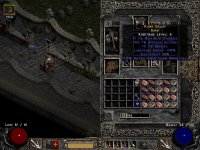 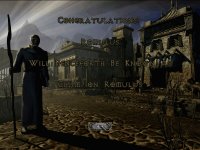 With Fortitude, it packs quite a punch in late NM. Here's what LCS said as he prepared to tackle Baal at lvl 70: 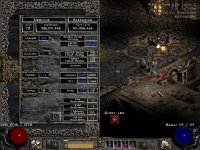 He was past lvl 72 at Champion, and was just shy at lvl 73 when he circled back to finish off Nihl, with a single Pindle run getting him to lvl 73. Four Baal runs later, we're sitting about a quarter into lvl 76. I'll probably do the 3-4 Baal runs needed to hit lvl 77 before shifting to the Cave for two more levels to lvl 79 and Wolfhowl, likely picking up a Barb merc before going into Hell.

He had three notable drops while questing, a Torch of Iro in A2 NM, an Um when tackling Nihl, and then a Lightning skiller during Baal runs 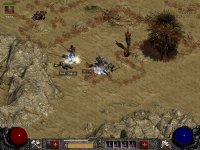 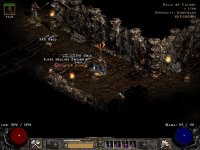 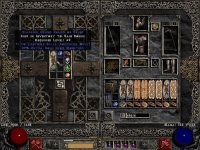 I still need to figure out final gear and will probably do a couple extra runs once he can equip the helm and respec to get used to gameplay. For the merc, I was thinking about HoJ, but the hit-blinds will override procs for amp or decrep that others may cause. So I will give thought to see if I can come up with something else fun.

Edit: 4 more Baal runs got him to just shy of 78, and it took only two trips to the Cave to hit 79. After some fiddling, I'm planning to go Death and Dragon armor for the merc. Fortitude makes him much beefier with leeching, but I think the level 34 Might from group play will help, and the Holy Fire and Hydras and Glacial Spikes are fun to have. With two HotOs on switch, Mara's, BC, and a 3/5/6/6 Wolfhowl, the Werewolf lasts 360 seconds, which is definitely doable. Solo at p8, things are a bit sloggy, especially when a cursed boss is around. But I think it will work out well for the group playthrough.

Code:
Levelling done, respecced into a bear.
Messed up some point allocations and respecced again.

Life is a bit underwhelming, but that Tomb Reaver takes a lot of stat points.
I need to enchant for the AR, it is about 5K without.

How is the levelling going for everyone else?

Any idea how much BO everyone will have ?
My BO is not that pungent (lvl 23) but I maxxed Shout too.
Reactions: d2lover, D2DC, PhineasB and 1 other person
F

Still at lvl 1 here. D2R is a distraction to say the least plus work is rather busy again.. but should be ready in time.

I'll have BO at roughly 32-35 or so, depending on exact item choices and inventory space. If someone else is carrying more + skill gear (@snickersnack with his Singer possibly?) let me know and I might just go without skillers altogether.
Reactions: snickersnack, PhineasB and maxicek

I actually only have ONE warcry skiller, which is kind of odd. So, If I go dual HotO, I'll have about 37 BO. If I go with HotO/wizzy, I'll have 34. If someone wants to loan me some skillers, we can take the Barbarian Horde's BO to the next level! We'll breathe deeply through our iron nostrils, we'll see our enemies driven before us and hear the lamentations of their women!
Last edited: Oct 4, 2021
Reactions: Vildecor and D2DC

maxicek said:
How is the levelling going for everyone else?
Click to expand...

maxicek said:
Any idea how much BO everyone will have ?
Click to expand...

I will probably have ZERO BO. So, kinda counting on the group to come thru! XD
Reactions: d2lover, maxicek and PhineasB

@snickersnack I have some nice Sounding skillers, 1 Vita, 2 with FHR and enough “of Life” and other secondary mods to fill the rest of the backpack. Happy to send them your way for the playthrough if helpful.
Reactions: d2lover

Code:
@D2DC is going to loan me some skillers, so we're looking at ~45 for BO. Also, if I go without Insight on switch, I could dual wield CtA and get ~50 BO.

only one cta, as +to a skill is capped at 3 if it's for every class for the class that knows that skill.
Reactions: snickersnack

Code:
Plugging along at a nice clip. Will be done very soon.
Reactions: d2lover, PhineasB, D2DC and 1 other person
F

Also, important announcement, everybody don't forget to load up on TP tomes. @maxicek told me this time he plans to do no walking at all outside town and travel exclusively via TPs.
Reactions: d2lover, PhineasB, snickersnack and 3 others

d2lover said:
only one cta, as +to a skill is capped at 3 if it's for every class for the class that knows that skill.
Click to expand...

I'd forgotten about that. Thanks!

Insight on switch, then.
Reactions: d2lover

Code:
I'm just about ready. I levelled using a frenzy build (dual Grief BA atm), so I still need to respec. I'm not sure if I should finish levelling up to 80 (arach's) with frenzy, or if I should respec now and finish levelling with War Cry. The latter will probably take a bit longer, but I'll have the pattern down better.

Edit: Table is updated. All ready. I still have some stat points to distribute, but I'll see if I need more life or more mana. Level 44 BO.

I'm going with Arreat's Face instead of Shako for the res and fhr, but I'm not sure what to put in the socket. I have 50 fhr, and I'm not sure that the next bp would help much. I could get to 90 fhr, but then my resists when holding Insight would suffer a bit. Maybe just a perfect sapphire would be good. That would give about 100 mana after BO. Hmmmm.
Last edited: Oct 8, 2021
Reactions: d2lover, maxicek, PhineasB and 1 other person
F 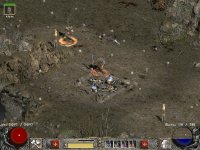 It was nice being able to stop leveling at 70 for a change!

I went with Enigma for positioning. Also won't be dealing meaningful damage so I'll have to stick to others in any case. Figured I'd just go with Lawbringer Merc in the end, so that coupled with teleport I can provide Decrepify when and where it's needed while not losing Might uptime. I'm not sure yet whether I'll keep Lacerators on switch (for PIs that aren't broken by Decrepify) or go dual Hoto for higher war cry levels. I'll just bring everything and we'll see how it goes.

@ffs That's more-or-less my strategy as well. I'm going with dual HotO with Insight on switch. I'll mainly use HotO switch for buffing the group and then Insight most of the time. My hope is that we'll brush off mana burn packs. Even on Insight switch, my War Cry, being partly synergized, packs about 1100 damage per cast, so there's decent AoE damage. I plan on being in the center of every fight.

With lvl 34 Might I'm guessing you're dual wielding Last Wish. Maybe that'll be in my reach if I keep doing trav/lk/cs runs consistently for another year. I still don't have Infinity, but Last Wish is high on my list (I very much want a LW kicker.).

For merc weapons, should we have more than 1 Crescent Moon? I think more than 1 Lawbringer is probably wise. Right now, I have Lawbringer in the merc's grubby mitt, but I have Oath and Death in the stash for moar damage. My only CM is in a Phase Blade, which my merc can't wield yet.
Reactions: PhineasB and d2lover
F

snickersnack said:
With lvl 34 Might I'm guessing you're dual wielding Last Wish. Maybe that'll be in my reach if I keep doing trav/lk/cs runs consistently for another year. I still don't have Infinity, but Last Wish is high on my list (I very much want a LW kicker.).
Click to expand...

I made only one of them for the RW grail and some occasional fun build use:

Code:
For this specific build, @PhineasB loaned me his LW:


Code:
So yes dual wielding Last Wish, but really don't bother with it, definitely not worth the runes unless you have at least one (probably even several) of Enigma and Infinity. I'd say I'm relatively wealthy for nowadays standards, but something like dual LW is still very far down my to do list, there are so many things that make more sense. Both of these are nicely rolled though, mine got perfect ED in a 15 ED base, and @PhineasB's has perfect CB.