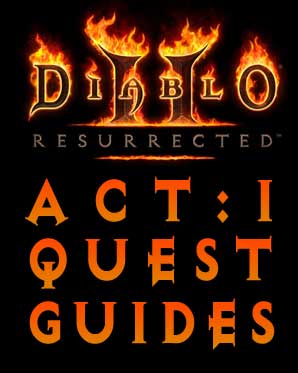 Act I: Tools of the Trade Details

When Charsi fled the Monastery she left behind her Horadric Malus, an enchanted smithing hammer. If you can retrieve it for her, she will use its magic to strengthen your weapons. The Malus is guarded by the Smith.

When you get near the Barracks, Charsi will be activated to ask you to retrieve a smithing hammer she had to leave in the Monastery when they fled the sudden invasion of demons lead by Andariel. You need to find the inner room (in a random location each game) of the Barracks level (first level inside the Monastery) with the forge and the hammer on a stand. Note, the player character must be at least level 8 on all difficulties in order to interact with the stand, acquire the Malus and complete the quest. It is guarded by the Smith, a large boss monster reminiscent of the Butcher from Diablo I. He will pursue you at a high rate of speed and is a pretty nasty fight. He hits very hard and has a lot of hit points. You however do not need to kill him, you can just dodge around him and grab it from the stand. Once you return to town and click on Charsi she’ll claim the hammer, even if you have it in your stash.

The Smith can’t open doors, so if you are a ranged attacker and can’t take him toe to toe (which is pretty likely unless you have extremely good equipment for your level) you can lead him through the Barracks to one of the barred walls or corners, such as the one around the steps leading down, and close the door. He’ll pace on the other side of it, but won’t open the door, giving you free shots.

The Imbue Quest is a very valued one, more so in D2 than D2X, where Rare items aren’t as big a deal. This one should be executed at specific levels, depending on which type of item you are going to Imbue, and what you want on it. Read the Imbuing Guide for more details.

When I fled the Monastery, I left behind the Horadric Malus, my enchanted smithing hammer. If you can retrieve it for me, I’ll use its magic to strengthen your equipment.

The retrieval of the Horadric Malus is not without risk. Our Monastery is filled with voracious hellspawn. You’d best be careful, my friend.

The Monastery can confuse even those who know it well. Stay alert in there.

The Malus was forged and enchanted by the ancient Horadric Mages during the Sin Wars. When their union dissolved, the Malus was entrusted to the Sisterhood guarding the pass into the East.

Charsi talks of nothing anymore, but this Horadric Malus. Between you and her my ears need a rest.
Just find it and bring it back quickly.

Charsi is wasting her time and talents using an inferior hammer! Had she the Horadric Malus, she could make the steel sing and craft you a suit of armor as impenetrable as the Great Eye.

Just as an archer needs bow and arrow, or a draughtsman pen and paper, so Charsi needs the Horadric Malus with which to ply her trade.

If you can’t carry out this quest, how will you face the greater evils ahead?

The Malus is a Horadric artifact of great power. Please bring it back.

The Malus has eluded you so far. Well, search thoroughly in the Barracks… That is where the Rogues kept their forge.

I have heard that you bear us no Malus.

To do battle with Andariel requires more than thick skin and a strong will. You’ll want armor and weaponry forged with the hammer’s enchantments.

What better opportunity to show your mettle?

Well done, my friend. But remember, the return of the Horadric Malus is but one step in reclaiming the Monastery.

Oh! Thanks so much for returning the Horadric Malus! I will now imbue one of your items with magical powers.

The magical effects imbued by the Malus are impossible to predict, but are always to the good.

I guess it’s too late to take back some of the names I called you.

Now that the Horadric Malus is back in our possession, we shall use it to deliver a great blow against the Evil which torments this land.

I am glad the hammer has returned and you with it.