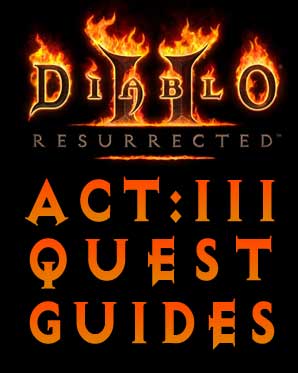 This is the one quest in the game you can do anywhere in the Act. At some point when you kill a boss monster, it will drop a Jade Figurine. You must return this Jade Figurine to Meshif. He will give you a golden statue which you take to Alkor and get the +20 life potion for.

There is no telling where the boss monster will drop this item, though it is usually the first or second one you kill in the Act, no matter your location. It might be dropped by the first boss monster you see in the Spider Forest, or from one of the High Council near Mephisto on the third level of the Durance of Hate.

Check out the quest talks by the various NPCs while you are doing this one, there are some very funny dialogues, especially from Asheara when you have the Golden Bird, before you give it to Alkor

If you are creating a game just to find the Statue, it’s not a bad idea to go right to Travincal or Durance Two. In either place you’ll find boss monsters very quickly, in the form of High Council members.

If you are in a multi-player game, someone else who doesn’t even need the quest might kill a boss before you do and have the Jade Figurine drop. If you see this and you’ve done the quest already, you should announce that it’s dropped and pop a portal for anyone in A3 who needs it.

Only one will drop in each game, so even if it drops for someone else who can’t pick it up since they’ve done the quest already, you won’t ever see one (unless you find it on the ground where they got it). And as with most quests, if you join a game created by someone who has already done it, you won’t be able to do it yourself.

Who has not dreamt of immortality? One man is rumored to have done more than merely dream. Find the Golden Bird of Ku Y’leh and you might find the secret to everlasting life.

Many alchemists believe that Ku Y’leh magic elixir bonded with his body before his death. His ashes are therefore considered to be very rare, highly potent, alchemical ingredients. If I could procure the ashes, I would create a potion which could defy death itself.

Legend has it that those who murdered Ku Y’leh for its secrets wound out losing its coveted ashes. They died of old age and madness.

Ku Y’leh was a powerful sage who was rumored to have brewed a potion of immortality. In an ironic twist of fate, he was murdered before his potent elixir could take effect.

Don’t tell me you believe in all of that ‘life after death’ nonsense. You should be more concerned with avoiding death than making plans for after it finds you.

Ku Y’leh, in searching for immortal youth, found only an early death. His apprentices, seeking to live forever, burned his body in order to derive benefit from his ashes.

Remember, Ku Y’leh ashes are stored within the statuette of the Golden Bird. The Bird is worth a great deal to the one who can locate it.

Only Deckard Cain can make sense of this.

Back in Lut Gholein Meshif told me he had a fondness for jade figurines. On his trading voyages he collected an odd assortment of such small statues.
I would show him your figurine.

Well, you’ve got something there. It isn’t the golden bird.

Praise you! That jade figurine will complete the set I was collecting.
Here! I’ve had this statuette of a golden bird for years, but I consider it a fair exchange.

Ah, the Golden Bird of Ku Y’leh. Thank you, my friend.
Busy yourself while I experiment with the ashes within it. Then, return and see what I have made for you.

Such a beautiful statuette… But, you’d think it would’ve been better cared for. There’s a compartment here that’s full o’ dust.

I’ve read legends about a sage named Ku Y’leh, who studied the mysteries of life beyond death.
If I remember correctly, his ashes were ensconced within a golden statuette. It was a very strange tale.

You will have to take Ku Y’leh’s ashes to Alkor.

I’m having fun just watching you run from place to place searching for a Golden Bird. Some hero you are.

From the ashes of Ku Y’leh I have mixed for you a potion.

So, Meshif had the Golden Bird all along. I wonder if he knows what he gave up for that jade figurine.

Immortality is definitely not for me.
Can you imagine having to wake up every night just to piss for the next thousand years?

I must admit, your foolish quest made little sense to me. But now I see the value of your actions. I believe you do possess great wisdom.

Ormus remembers the tale of Ku Y’leh. That venerable sage forgot that there is no life beyond death. There is only life.
Once prolonged unnaturally, it can become a living hell.

If Alkor can make you a potion to live after death, use it wisely. Few mortals ever get a second chance at destiny.