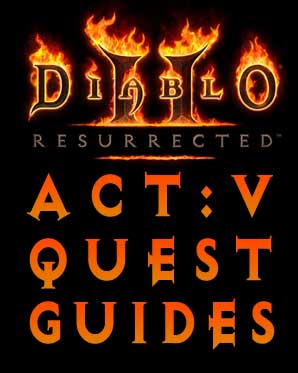 Malah tells you about this quest with a long speech. By the time you get this quest you’ve noticed that Nihlathak has been gone from town for some time, and you have no one to gamble with. Malah says:

“Here is a matter which I hesitate to share, but I believe you are the only one who can help me now. Anya, the young alchemist and daughter to one of our slain leaders, has been missing for some time. She is a strong, crafty woman with a spirit like no other. One night, just before your arrival, I overheard her and Nihlathak arguing about her father’s death. The next morning she was gone. Nihlathak has his own tale as to where she went and why. Don’t believe him! I fear he is at the root of her disappearance. Please, if you can, search for Anya and bring her back to us. She’ll know what to do about Nihlathak.”

You can talk to all of the NPCs about this quest, and they all echo her comments, basically saying that Anya is missing, and that they suspect Nihlathak.

If you go to the Frozen River level and then come back to town, the NPCs have gone past suspicious, and call Nihlathak a “snake” and saying that he’s “slipped through our fingers”. He’s actually been gone since around the time you got Quest Two, but never mind that.

Once you find her, she tells you that Nihlathak did this to her, and to tell Malah what’s happened to her. When you return to town Malah is eager to talk and she gives you a thawing potion she’s prepared.

You return to Anya and click on her, and when you do a huge plume of blueish-white smoke rises up like a geyser. After a few seconds Anya walks out the left of the smoke, and shortly after it vanishes. She casts a town portal (that you can’t use) and vanishes back to town.

When you return to town you should talk to both Malah and Anya. Both give you very good rewards for your actions, so this is an essential quest to complete for the rewards, even if you don’t need to do it to finish the Act.

From Malah you get a scroll that permanently adds +10% to all of your resistances. Do this on all three difficulties and you will have +30% to all, making up most of the increased resistance penalty in the Expansion. Like the other +quest items (potion of life, book of skills) you can only get this reward once per difficulty level, so don’t bother trying to mule the scroll or get two of them.

In addition to the resistance scroll from Malah, Anya gives you a Rare, class-specific item for your character class. A sorceress gets a Rare orb, a Druid a rare animal pelt, etc. The Amazon gets either a Javelin, Spear, or Bow, but it’s not tied to what you are using, so good luck with that.

Another benefit to rescuing Anya is that you can now gamble again. Nihlathak lets you gamble when you first reach Act Five, but he vanishes soon after and you have no way to gamble until you bring Anya back. (You can take a waypoint to a different act to gamble, if you can’t wait for Anya.) You also need Anya to buy throwing potions from.

Think of it like Act One. You need to find the Dark Wood Waypoint before you go back to town with the Scroll of Inifus, since you’ll then go to the Field of Stones and Tristram, and probably end up having to run all the way from the Field through the Underground Passageway to get back to the Dark Wood. If you do this in the next game you’ll have to clear it as you go, which is annoying.

There is a matter which I hesitate to share, but I believe you are the only one who can help me now.
Anya, the young alchemist and daughter to one of our slain Elders, has been missing for some time. She is a strong, crafty woman with a spirit like no other.
One night, just before your arrival, I overheard her and Nihlathak arguing about her father’s death. The next morning she was gone.
Nihlathak has his own tale as to where she went and why. Don’t believe him! I fear he is at the root of her disappearance.
Please, if you can, search for Anya and bring her back to us. She’ll know what to do about Nihlathak.

I would listen to Malah. Nihlathak speaks with a venomous tongue and acts as if the entire weight of this town rests upon his shoulders.
Perhaps there is more going on here than we know.

Anya is an amazing alchemist, especially for her young age. As long as I’ve known her, she’s never let anything stop her from pursuing what she believed in.
I wouldn’t doubt that Nihlathak is involved. Ever since her father died, they haven’t gotten along.

When you talk to Nihlathak, be careful. There is no telling what he will say or do.

Anya! Who have you been talking to? Likely it was that meddling Malah.
Well, I’ll tell you what really happened. Anya came to me for guidance, after receiving a vision that her mother and younger brother were trapped in the lands beyond the Ice Caves. She had decided to go rescue them.
I told her that her quest was a foolish one and that she would be safer staying within the city walls. However, she is a willful girl and would not listen to me.
The next morning, she was gone. No one is more distraught than I over losing her.
However, if you feel the need to be Malah’s errand child, I won’t try to stop you.

Anya’s father, Aust, was our wisest Elder. He was killed along with the other Elders who erected the ward that protects this city. The ward has kept Baal’s demons out of Harrogath, but at a costly sacrifice.
Nihlathak, on the other hand, was the only Elder to escape the demons. Somehow, he alone managed to find sanctuary, while the others died around him.
Ever since that day, Nihlathak and Anya have been at odds.

Nihlathak’s story does sound reasonable, considering what I’ve heard about Anya. However, the best lies are often hidden within truth.

As the daughter of Elder Aust, Anya is the only person, besides Nihlathak, who has any real knowledge of Mount Arreat’s secrets. I’d hate to see our fate in the hands of Nihlathak alone.

If it were anyone else, I would assume her dead. However, Anya is not so easily beaten. I know she must be alive.

Look, I’ve told you! She’s dead! If you knew what was good for you, you’d concentrate your efforts on saving Harrogath — not on lost causes like Anya.

It seems like everyone feels Nihlathak played a part in Anya’s disappearance.
Why would he do such a thing?

Hero. Nihlathak did this to me!
If you’ve come to help me, my only hope lies with Malah.
Please…Tell her you’ve found me…

Meet me in town! Hurry!

Goodness! Anya frozen by that fallen Barbarian, Nihlathak…Perhaps Malah can help you where I cannot.

Poor Anya! I should’ve known Nihlathak was a traitor…
If you find him alive, kill him for me!

So! That snake Nihlathak was behind Anya’s disappearance…and he trapped her with a freezing curse.
Here. Take this potion to Anya and give it to her. That should release her.

The snake has slipped our grasp! While you were gone, Nihlathak disappeared.
I’ll bet Anya knows how to track him down.

Thank you, hero, for rescuing me.
To show my personal gratitude, I give you this. I had it custom-made for you by Larzuk.

For one so young, Anya commands great respect. Now that she is here, I will make it a point to talk to her about Mount Arreat.
You should do the same.

I never liked Nihlathak, but I never suspected that he’d betray us! I just can’t understand how an Elder could do such a thing.

Thank you so much for bringing Anya back to us. I have devised this spell to increase your resistances as a token of my thanks. I know it isn’t much, but I hope you find it helpful.
Please go talk to Anya. She has urgent news concerning Nihlathak.

Your rescue of Anya was quite an accomplishment.