Share
Tweet
Share
Email
The Pandemonium Event is a multi-stage bonus quest added in v1.11. This quest can only be accomplished on the Battle.net realms, in Hell difficulty.

The Pandemonium event can only be undertaken on the Battle.net realms, and is not functional in Single Player or LAN games. This quest culminates with a massive battle against souped up versions of Diablo, Baal, and Mephisto, along with the minions they summon, in a new version of the town Tristram. This struggle is by far the most difficult one in the game, and is the only way to obtain the Hellfire Torch unique large charm.

There are several steps you must complete in order to reach Uber Tristram.

The first step is to gather the three keys required to open the first of the red portals. The Keys of Hate, Terror, and Destruction are required, and can only be found from certain boss monsters, and only on Hell difficulty. Get the Key of Terror from The Countess, the key of Hate from The Summoner, and the Key of Destruction from Nihlathak.

It’s a good idea to have 3 of each key before beginning the second stage of the Pandemonium Event, so you can do all three of the special areas in the same game. (The same area will not repeat in the same game, so you’ll have all 3 ingredients for Uber Tristram.)

The keys look identical, and can only be discerned between by hovering on them to see their name.

These are dropped by The Countess, who is located on the fifth level of the Forgotten Tower in the Black Marsh, Act One. She is commonly run for her rune drops, and will drop a Key of Terror about 8% of the time she dies on Hell difficulty.

The Summoner drops this one. He’s found at the end of one of the four points of the Arcane Sanctuary, in Act Two. He will only drop a Key of Hate on Hell difficulty, and even then only every few games.

Nihlathak sometimes drops this key, but only on Hell difficulty. He’s found at one end of the four-pointed Halls of Vaught, the lowest of the three Halls levels reached through Anya’s portal in Harrogath, in Act Five.

Once you have the keys, stand in Harrogath, on Hell difficulty, place one of each in your Horadric Cube and convert them. A red portal will open to one of three locations; the Matron’s Den, the Forgotten Sands, or the Furnace of Pain. Which portal opens first is random, but if you do all three in the same game you will not get the same one twice. For this reason it’s recommended that you have 9 keys to begin with, 3 of each type, so you can do them all in the same game.

It’s also recommended that you stand in different places so you’ll spread out the three portals, so they don’t overlap and make selecting the correct one ‘uber difficult’. You’ll be adding a 4th portal once you’ve completed these three, to Uber Tristram, so save room.

This level is reminiscent of the Forgotten Tower in layout. Within it you will find Lilith, sometimes referred to as “Uber Andariel.” She looks just like Andariel, the act one quest boss, and uses her same attacks, but to much more effect. Her poison spray is especially dangerous, and characters will want to gear up with heavy poison resistance and some poison antidotes as well.

Lilith drops Diablo’s Horn, one of the three items required to open a portal to Uber Tristram.

This level is identical to the Canyon of the Magi, the last waypoint of Act Two. Here you will find Uber Duriel roaming free. He’s a bigger, nastier version of Duriel, the Act Two boss, and is equipped with the same Holy Freeze Aura and other attacks.

Uber Duriel drops Baal’s Eye, one of the three items required to open a portal to Uber Tristram.

The Furnace of Pain

The third red portal area is the Furnace of Pain, an area identical to the three “Pit” areas reached from the red portals found in the surface areas of Act Five. Here you will find Uber Izual, a beefed up version of the SuperUnique quest monster Izual, found in the Plains of Despair in Act Four.

Uber Izual can teleport, and often spawns with some very nasty minions. He drops Mephisto’s Brain, one of the three items required to open a portal to Uber Tristram.

To create a red portal to Uber Tristram, place Diablo’s Horn, Baal’s Eye, and Mephisto’s Brain in the Horadric Cube, and transmute them while standing in Harrogath in a Hell difficulty game. A red portal will open, the fourth in that area if you’ve done them all in the same game. It takes you to Uber Tristram, where the real fun begins. 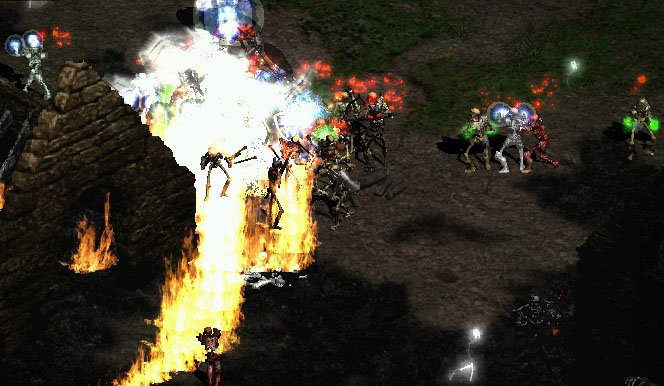 Uber Tristram has the same layout as regular Tristram, though the entry portal appears towards the north of town, rather than in the far eastern corner. Scattered through the center of town are Uber Mephisto, Uber Baal, and Pandemonium Diablo (so named because Uber Diablo was already used in another bonus quest). They are massively harder than their usual act boss selves, boosted by new abilities and much higher hit points, defense, damage, and more. They are also able to summon minions at regular intervals, further complicating things for intrepid adventurers.

He possesses all of regular Baal’s attacks and more, including Mana Rift, Hoarfrost, Incineration Nova, and more. Check the Uber Baal page for more details. He can also teleport and duplicate himself.

He is much stronger and faster than regular Diablo, and uses his Bone Prison and Firestorm skills to lethal effect. He can cast Armageddon, the Druid skill, raining fire down on all his attackers, and frequently summons a variety of nasty monster minions during the battle. See the Pandemonium Diablo page for more details and full stats.

Note that this is not Uber Diablo, who spawns as part of another bonus quest and drops the Annihilus Charm.

Uber Mephisto is a deadlier version of himself. He comes with a very high level Conviction Aura which will reduce maxed resistances to negative values, and a variety of elemental attacks including Blizzard and Lightning. His resistances are very high as well, and he regularly spawns elemental minions such as Skeleton Mages and Archers. 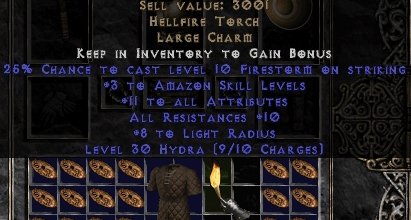 The principle reward for this mission is the Hellfire Torch, a unique large charm that can only be obtained from this quest. Like the other unique charms, characters can only hold one of each at a time, so you’ll want to bring in a character who does not have one to pick up the prize.
In addition to the Hellfire Torch charm, one Standard of Heroes item drops for each character in the game. These items do not yet have any function, but rumours abound about what they might do in some future version of the game.

Besides the items, it’s possible to gain a tremendous amount of experience in Uber Tristram, by killing the various minions the uber bosses spawn. Players have found that this is a great way to power level lower level characters. These characters are of no use in the battle and must stay well out of the way or risk instant death, but by being in the area and in the party, they will enjoy enormous shared experience bonuses. Reports of leveling from 1 to 80 or even 90 in a couple of hours spent in this area are not uncommon. This exploit requires a number of very powerful characters doing the tanking and killing, but with teamwork it’s quite possible.

More details on the so called “Tristram glitch” can be found in forum threads like this one.