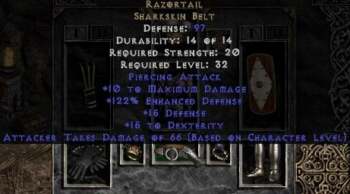 There are hundreds of different Diablo 2 modifiers for items with an incredible array of properties, all of them of different levels, droppable by different monsters, some only on higher difficulty levels, and more. The variety is nearly infinite making item hunting one of the most fun aspects of Diablo Resurrected.

With magic-only modifiers it is possible to find a rare with almost any mods that can occur on a magical item of the same type, and this makes rares potentially very, very useful. Especially thanks to the new Cube Recipes that allow rare items to be upgraded to exceptional or elite.

A stat you’ll notice listed for every prefix and suffix is the Item level, or Quality Level, as it’s more accurately referred to. This is a number that is used in many game calculations. Monsters must be at least that high in level to drop an item with that affix on it. Your Clvl must be no less than 6 below the Qlvl to get it on an Imbue. The Clvl requirement is 3/4 the highest Qlvl affix on an item. The Qlvl also factors into gambling, modifiers you see on items for sale by NPCs, repair prices, and many other things.

Crafted items are basically Rares with some preset mods. Since these mods are usually ones that can not be found on magical or rare items, crafted can be used for special purposes. Blood Gloves can spawn with Crushing Blow, for instance, and other crafted items will guarantee some sought-after property, such as life leech on Blood Amulets. Crafted recipes were largely neglected in the earlier v1.10 and v1.11 patches for the original game, when numerous new runewords were added, and as a result crafted items are now somewhat underpowered, but you may still find some potential useful recipes. Crafting is relatively cheap to undertake, requiring just a low-level rune and a gem, along with a magical item, so it’s worth the effort for min/max type players who worry about every last point of damage and resistance.

Charms are small magical items that provide a continuous passive boost to your character so long as they are in your inventory. There are no Rare Charms, only Magical, so you’ll never get one with more than two affixes, and they don’t have very many types of bonuses either. The bonuses, values of them, and their Quality Levels and Clvl requirements vary widely between small, large, and grand charms, so there are pages for each of these.

Several unique charms were added in post-release patches, some of which can only be retrieved by completing special, ladder-only quests.

Runes are small objects that give no bonus on their own, and can not be equipped. Instead, they are like gems and jewels; they grant bonuses to items once they are socketed into those items. There are. 33 runes, and they are useful for their individual bonuses, as well as the potential to make the awesomely-powerful Runewords. Runes do not have affixes, random or otherwise. Every type of rune grants the same bonus each time you find it.

Jewels are small objects that have no function until they are socketed, when they add their bonuses to the item you seat them in. Jewels differ from Gems and Runes, the other items that can be stuck into sockets since they are random. Jewels can be magical, rare, or unique, and there are millions of possible Jewels, with all of the prefixes, suffixes, and different ranges of values on them.

Various special modifiers are found on uniques, sets and other such items. These grant special bonuses not found on magical or rare items.