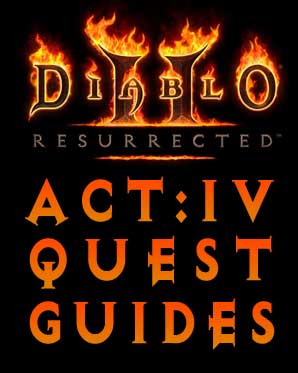 The Hellforge is an object located in the River of Flame in Act Four. Its location changes, but it is always found at the tip of a peninsula. Hephasto the Hellsmith is always found near the Hellforge, and he must be defeated and his hammer taken to complete the Hell’s Forge quest.

You must destroy the Soulstone you got from Mephisto on the Hellforge, a blacksmith’s forge in Hell. This is the forge Izual was attacking to prevent the completion of Shadowfang when he was captured, in the Diablo mythology. At the Hellforge you’ll find Hephasto the Armorer, a SuperUnique monster. You must kill him to make him drop the Hellforge Hammer, which you should then equip. (It must first be identified in early versions of Diablo II.)

If you click on the Hellforge and have Mephisto’s Soulstone in your inv/cube/stash, the stone will appear on the Hellforge. Equip the Hellforge Hammer and click on the forge. It takes three swings to shatter the soulstone. You get a very pretty display as hundreds of skeletal-souls fly up into the sky, freed by the shattering of the gem. (The graphics are borrowed from the Paladin’s little-seen Redemption skill.)

The reward is in the form of gems, and a rune in the Expansion. Four gems fall to the ground as the souls are flying away. They are always one normal, two flawless, and one perfect, of random types. There are four gems for each player in the party who is finishing the quest, so in a five player party, with three people needing the quest all in Act Four, you’d get twelve gems, and have to sort out who gets which. You want to be careful if you are new to Act Four, and in a party, since others might finish the quest and get all of your gems even if you are in another area. In the Expansion there is one Rune dropped each time the soulstone is smashed, no matter how many are in the party, so you might want to be sure you do the quest yourself to get your Rune.

Hephasto was one of the most feared monsters in the game prior to v1.08. He was always Cursed, Extra Strong, and Magic Resistant, did huge damage, and had a lot of foot speed. Hep spawning with Might or Extra Fast was a terrifying sight; he could outrun most characters in a footrace, and packed a potential one-hit kill for many types of characters. Most players, especially hardcore characters, lived in dread of his section of the River of Flame, and ran for their lives if they got close enough while exploring to trigger his quest button to pop up. He’s much less fearsome in v1.08 and the Expansion, with Spectral Hit and Conviction instead of his earlier mods, and he’s not as quick either, so killing him solo is no longer a real test of your skills or technique.

You don’t need to carry the Soulstone you get from Mephisto in Act Three, Cain will give you a new one each time he gives you the quest if you don’t have one.

To deal with Hephasto, if you have a ranged attack, lure him to some spot in the lava with a gap he can’t run around, then get yourself to the other side (If you can’t teleport, portal back to town and come back down by the waypoint in the City or River, depending on which side you want to come from) and hit him from a distance until he dies.

Melee characters benefit a lot from a Knockback or stun sort of attack, either from skills or from equipment. Wear Cleglaw’s Pincers, or use Smite or Bash, and you can pin Hep against a wall and keep him motionless for as long as it takes to kill him.

The time has come for you to destroy Mephisto’s Soulstone!
Take the Stone to the Hellforge. Place it upon the forge and strike it soundly with the Hammer.
Only by doing this can you prevent Mephisto from manifesting in this world ever again.

The time has come to destroy Mephisto’s Soulstone!
Although I picked it up before entering the Infernal Gate, I believe you should carry out this crucial mission.
Take the Stone to the Hellforge. Place it upon the forge and strike it soundly with the Hammer.
Only by doing this can you prevent Mephisto from manifesting in this world ever again.

Congratulations, hero!
Surely, even Diablo, himself, sensed the fury unleashed when you smashed his Brother’s Soulstone.

Proceed, hero, into Terror’s lair.
Know that Diablo’s innermost sanctum is hidden by five seals.
Only by opening each of these seals can you clear your way to the final battle.