Ethereal Items are found only in the Expansion Lord of Destruction which is part of Diablo 2 Resurrected. “Ethereal” is not a modifier, it’s a type of item flag, similar to Superior or Socketed, that can occur on all types of items. Ethereal can occur on normal items, but also magical, Rare, Unique, (but not Set), any type of item in the game that has durability.

Ethereal occurs on about 5% of all weapons and armor. It is both good and bad.

So an Ethereal weapon will potentially have the biggest damage of any weapon in the game, but it wouldn’t last long. Armor can be usable indefinitely with Ethereal on it, depending on how often your character gets hit, and the added Defense can help, but very few characters select their armor based on it adding higher defense, and the ones that do are the ones who need higher defense, I.E. they are getting hit a lot.

Ethereal items are always found with full durability, unlike normal, magical, and rare items. Of course this full durability is about half the normal, but instead of finding say 23/50 Field Plate, the ethereal will have 27/27 when found.

Ethereal items with charges do not spawn with full charges, and the spells can not be recharged except with a Horadric Cube recipe.

Ethereal items calculate the 50% defense or damage increase on the base item, and that is then modified by any mods on the item. This makes for much larger improvements in defense/damage.

Ethereal items on the ground have a dark gray name, just like socketed items. You can’t tell a socketed armor, helm, weapon, or shield from an ethereal from the name tag. Obviously if the gray-text item is boots, belt, or gloves, it’s going to be Ethereal, since those items can’t be socketed. Bliz has considered changing the colors, such as making Ethereal slightly lighter grey, but this hasn’t happened yet. You can’t see any indication that a magical, set, rare, or unique item in Ethereal from the name when on the ground.

In your inventory Ethereal items are transparent. They have the same colors from affixes as other items, but they’ll always be somewhat see-through. 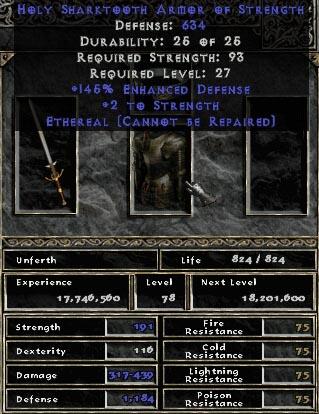 A nice sort of Easter Egg occurs when a Necromancer creates an Iron Golem from an Ethereal item. The golem appears partially transparent.

Prior to v1.09, Ethereal didn’t add that big of a bonus, since the 50% was just tacked on at the end. If you had an Ethereal Ornate plate with 440 Defense base, the Ethereal would act like a +50% enhanced defense modifier, and you’d get 220 more defense. Not a bad bonus, but you can get up to +100% on Rares, and +200% with Godly on magical items, and in those cases the bonus from the Ethereal is just a small part of the total defense.

This was changed in v1.09, so now the Ethereal 50% bonus applies to the item’s base stats, and is then modified by any other bonuses. For example: in v1.08, Ethereal just added on like another 50% enhanced damage or defense, so a 200% Godly Ethereal Sacred Plate with 600 base def armor would have been basically 250% defense, so 1800 normal or 2100 Ethereal.

The following odds assume you are wearing all types of armor listed. If you do not have a given type of armor on and the game rolls that armor to take the durability loss, you do not lose any durability.

Weapons lose durability when you hit things with them, at a rate you are probably quite familiar with from play experience. Weapons also take the durability loss when a Paladin uses Smite. Throwing weapons lose from the stack when you use them for melee, at a reduced rate compared to regular melee weapons (about 1/6th as often).

If you don’t hit anything with your weapon, (as with an orb or staff or wand used by a spell-caster) the item will never lose any durability. So an ethereal orb is just as good as a non-ethereal one.

Ethereal items are best used on your hired Mercenaries, since their equipment never loses any durability. Your merc will enjoy the added defensive boost, or the extra damage, and can use that item forever. And the gear doesn’t sell for much, so you aren’t missing on a great profit by not selling it instead. Ethereal weapons are very good for mercs, and if you find some nice ethereal unique armor or helm, you can use it until it’s down to 1 durability, then put it on your merc where it will remain useful indefinitely.

Ethereal ruins the selling price, cutting it by 75% or more. You can still get pretty good gold for ethereal armor or wands/scepters/staves/etc, the really expensive stuff, but not weapons or most types of armor.

Anything you sell that is ethereal is gone; the NPC merchants will not display it for repurchase, even if they have room in their window.

An item can get Ethereal as well as one of the self-repairing modifiers, and will last forever if you don’t use up the durability quicker than it repairs itself. If you use it up completely, the item will regenerate durability, but will still be unusable. The key is obviously to take it off or wait in town to let it regenerate, if it’s getting really low.

These will refill themselves, but if they go to 0, they are ruined. The counter will refill, but you will not be able to equip them again. Ethereal Titan’s Revenge are a popular item, but you’ll need at least one spare stack of javelins to switch to when the Ethereal Titans get low.

All self-regenerating throwing items work the same way, in that they go to 0 and become unusable, even as the stack regenerates. It’s just that non-ethereal ones can be repaired (for 1 gold) and all is well. Ethereal ones are broken forever.

As of patch 1.10 this has been modified. A throwing item with the magic property Replenishes Quantity now replenishes if depleted to 0 quantity.

This is possible, and the Ethereal is calculated after any +durability from Superior. So a 50 durability item with say 12% bonus from Superior would have 56 durability, and that would drop to 31 with Ethereal.

Neither the item nor the charges on the item can be repaired, so once you’ve used up all of the spell charges, they are gone forever.

Ethereal socketed items remain Ethereal after becoming Runewords. Thus any Runewords created will be Ethereal and have the associated bonuses, but in an item that can not be repaired or socketed, even if you have another Zod rune.

Making an Ethereal Runeword simply for your Merc to use is possible, of course.

There are several runewords that become indestructible or self-repairing, and can thus be made in Ethereal items and used normally.

This is not a good idea, since the Ethereal stays on the item even once it’s been made Rare. Unless you are very lucky and hope for a self-repairing mod, have Zod runes to spare, or just want to make something for your merc, don’t do it.

You can socket a normal ethereal item, and it will remain ethereal, and gain sockets just as a non-ethereal item would.

In Diablo 2 version 1.11 and 1.11b, there is a bug regarding the socketing of ethereal armors and shields. Ethereal armors and shields are assigned a 50% bonus to their base defense rating when dropped. This is normal. What is not normal is the fact that when sockets are added to an ethereal armor or shield using the Horadric Cube, that ethereal defense bonus is applied again. The result is an armor or shield with an absolutely impossible defense rating. Enhanced defense modifiers are then added to that base defense rating, so the difference in end defense is rather huge. An ethereal Sacred Rondache shield socketed this way and the having the Rune word Exile installed can have a defense in excess of 1000. And because of the self-repair mod on Exile, it will not break.

Ethereal items that are crafted will become normal items, not remain ethereal.

The rule of thumb is that anything using a cube (crafting or other recipes) will turn an ethereal item normal, and remove the bonus damage or defense on it. Just imbuing or socketing with Larzuk will leave it ethereal, since there’s no cube involved.

The Zod Rune (#33) makes anything you socket it in indestructible. This is the only way to fix an Ethereal item, and as it would retain the damage or defense bonus from being Ethereal, you’d have an indestructible item with higher than normal stats.

There is no way to make an Ethereal item non-ethereal and retain its original stats, other than using the Zod rune, and it is partially bugged, as the above entry details. You must socket the Zod before the item goes to zero durability. Once it’s gone to zero durability there is no way to bring it back, and Zod will not help then. There is nothing else you can do to change an Ethereal without changing the entire item. Adding a socket, personalizing an item, etc has no effect on ethereal.

Ethereal items used to create the Necromancer’s Iron Golem look different than normal Iron Golems. The Golem gets bonus stats, and is transparent in the game, much like Ghostly champion monsters. Golems you can see-through are cool.

How Common is Ethereal?

Common, but not that common. It’s said by Blizzard to be 5% of all item drops, but since it can’t occur on various types of items (bows, xbows, jewelry, set items) the actual amount is less than 5% of total item drops. You’ll see something Ethereal every game, often several of them a game, but it’s only really noticed when you get it on a Rare or Unique. Pre-game there were lots of worries of great Rares being ruined by Ethereal, but this is very seldom an issue. So few Rares happen to have a good combination of mods, especially with Ethereal on them also, that it’s just not something to worry about. Ethereal Uniques are much more often a problem, since most Uniques are pretty good now, especially all the Exceptional and Elite ones.

What Does “Ethereal” Mean?

To quote the dictionary:

1 a : of or relating to the regions beyond the earth
b : celestial, heavenly
c : unworldly, spiritual
2 a : lacking material substance : immaterial, intangible

Not that any of this really matters in the game, it’s just a cool word Bliz chose to fit the idea of bonus/no-repair weapons. The fact that your characters are able to damage enemies with weapons described as “immaterial” is something that has yet to be explained. In any other circumstance armor and shields “lacking material substance” is generally a bad idea.