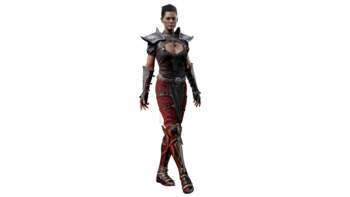 The Order of Mage Slayers was formed after the Vizjerei survived the tragedy brought on by Bartuc and Horazon. Their purpose was to watch for rogue magi that may become corrupted by the forces of Evil. To be effective at this task they were trained in abilities that were not conducive to Demonic corruption. Living as rumour and myth to the general population, even other magi knew very little about this mysterious order. Their reputation was shrouded in mystery and the simple fear of their retribution almost ensured steadfast vigilance against corruption amongst those who knew they were real.

Assassins do not employ the magical arts directly; rather, they use enchanted items that mimic elemental powers and can be used autonomously. To further avoid potential corruption, they focus on the natural abilities of the mortal body – powers of the mind and unarmed combat.

All fractional values are calculated exactly, but are rounded down in the character window, so displayed values may vary slightly.

The Diablo II Lord of Destruction Expansion introduced a new class of weapons that is expressly for the Assassin. These are claw-like weapons that she wears on her hands, either single- or dual-wielding. They can only be worn by the Assassin, and are the only way that an Assassin can dual wield. Assassins are not very skilled with other weapon types, so it’s rare to see one using anything but Claws.

As you’d expect from the title of this tree, these will allow her to perform various styles of combat kicks, as well as power-ups to augment her finishing moves.

This tree is divided into 2 areas. There are six Charge Up skills and four Finishing Moves, although you can use your regular plain attack.

A Charge-Up skill can be charged up to three times. Each charge will either increase the bonus damage delivered when/if the charge up is delivered. You must hit your target to register a charge. Charges are displayed visually by small, orbiting lights of appropriate colors. Charges persist for several seconds, and can be refreshed indefinitely. They will expire after

An example combination of Charge Up and Finishing Move:

Finishing moves can be used on their own but of course they’re not going to be as powerful without the Charge Ups.

Three of the four finishing moves use the feet, Dragon Claw uses the claws and then only when they are dual wielded. No claw plus shield setups can be used if you’re wanting your Assassin to use Dragon Claw. Also, charge ups are released on the first claw to successfully strike a foe only, not twice, once on the first claw then again on the second claw. The character screen displays it as if the Assassin will release a charge up when the left and right claw strike and that is not the case.

Weapons can be used with Martial Arts as follows:

This skill tree is similar to the Amazon’s Passive and Magic Tree, though there are many more combat type skills here, things that actually do damage, rather than just boosting your other attributes.

The first two skills on the left branch of the tree {Burst of Speed and Fade} should be treated as the Paladin’s auras in as much as only one can be active at a time. Casting another will cancel out the first, but Venom can be cast concurrently with the others.

It is worth pointing out that there are situations where the more limited Shadow Warrior is sometimes preferable to the Shadow Master. You may wish to have your Shadow use the skills you have active at that moment. The Master will use any of her 26 skills {not including Claw Mastery, Weapon Block & the two Shadow skills}. You may want her to use a certain trap or a certain martial Arts combination. The Master, while pretty intelligent, isn’t as clever as you {one would hope} and she has full reign over all skills {regardless if you have a point in it} so there’s a chance she’ll not use exactly what you’d like her to. Warrior on the other hand is limited to the two skills you have readied and therefore there’s a greater chance she will use those. This level of control is offset by the higher life and consistent mana consumption {20} of the Master.

Neither Shadow can cast any Shadow skills and they do not level up should they stay alive long enough. You will not benefit from any aura type skills {Burst of Speed, Fade & Venom} your Shadow casts and vise versa.

This skill tree lets the Assassin deal with packs before they get the chance to deal with her. A combination of projectile and remote devices to ensnare her foe. Three branches, lighting, fire and blades. All can attack multiple enemies at once, even the early grenade types such as Fire Blast and Shock Web have an area effect, albeit relatively small. Level 12 it gets more inventive, and in some ways easier, as she can set remote sentries to attack whilst she’s also attacking with a martial arts skill for example. These sentries will attack up to 5 or 10 times, depending on the sentry, before disappearing.

She has a number of Telekinesis sort of skills {Shadow Disciplines} where she can push foe back {Psychic Hammer} into a trapped area or confuse {Cloak of Shadows} them so they do not move from the area she has placed traps. Up to five Sentries {mixed or of the same type} can be active at one time, casting a sixth will destroy the first one cast. This number does not include Sentries set by her Shadows, they too can place up to five although you have no control over how many they cast, that decision is down to the wonders of AI.

The best thing about traps is once set, she can concentrate on other attacks, melee or otherwise. While she’s fighting hand to hand she can have five {never more} traps applying damage at the same time. Five Lightning Sentries firing a total of 10 streams of lightning each – 50 streams of lightning just as back up! Pop up a Shadow Warrior {Shadow Disciplines tree} so she’s casting the same traps and you could potentially have 10 traps and 100 streams of lighting. That’s quite unlikely though as the Shadow Warrior doesn’t seem to go for maximum output with the old traps. – This last information is incorrect. You and your shadow can have a total of 5 traps combined, not each, which is one reason the master can be a real pita for trappers when she cast traps that overrides the ones already being used by the player.

All sentries/grenades/blades can be thrown/set across rivers and over small walls, basically anywhere within the line of sight. Her Sentries are visible to other players, even hostile players. They disappear should she leave the level, whether voluntary or involuntary {death}. However they will not disappear if she stays put on the level after she dies, they will continue firing until they have used all their charges.

The Assassins are an ancient order originally founded by the Horadrim to hunt down and eliminate rogue mages within their own ranks. Employing secret disciplines to combat and resist the magical abilities of their elusive quarry, the Assassin’s bag of tricks includes traps and other infernal devices, martial arts, and powerful mental abilities. Common people know nothing of the Assassins, but they are widely feared and respected by all who employ the magic arts.

In the third century, two brothers rose to dominance from within the ranks of the Vizjerei clan of mages; their names were Horazon and Bartuc. Both were equally powerful and ambitious, and both were fascinated by the power one could obtain through the practice of Demonic Magics; however, the two differed in their views regarding how best to study demons. While Horazon viewed demons as a great source of power, he felt that in order to use that power best, you must harness a demon and bend him to your will. His brother, on the other hand, grew to sympathize with the demonic powers and felt (with no small influence from the demons) that the demonic forces were best understood by allying with the Hellish authorities so their secrets could be shared freely, and that is exactly what he did. Their diametrically opposed philosophies caused a great schism that split the ranks and tore the Vizjerei clan apart.

When at last their fierce rivalry culminated in inevitable violence, the combatants learned too late that they had both been played as pawns by the demonic host. The ensuing battle was so great it set the very firmament aflame, and when it was complete and the stillness of remorse was all that remained, Bartuc lay dead, Horazon had vanished into self-imposed exile, and the Vizjerei had learned a costly lesson. The small surviving group of sorcerers, the remnants of the once-great Vizjerei clan, resolved forevermore to spurn Demonic Magics and set about renewing their studies in the Elemental Magics. To further ensure that a similar tragedy could never happen again, they formed a secret order whose sole purpose was to police the mage clans, destroying corruption wherever they found it. This was the birth of the Viz-Jaq’taar, the Order of the Mage Slayers-otherwise known as the Assassins.

Knowing that such an order might itself be corrupted if exposed to the power of magic, the Vizjerei deemed it of the utmost importance that these Assassins maintain the purest, most focused minds. They should live in meditation and draw their power from within, not from external forces that could easily mask demonic interference. To this end, the Order would not employ the magic arts directly; rather, they would use ingenious devices and enchanted items to battle those possessing great magical powers. To further their campaign against demonic corruption, they concentrated on honing the natural martial abilities of their bodies, both physical and mental.

Because the Order remains veiled in secrecy, few people, even among the mages, know more than rumors about this mysterious organization. Their reputation has been one shrouded in ambiguity. Legends of their stalwart vigilance, and the widespread fear of their retribution, have kept many mages away from the temptations of corruption, so actual sightings have been rare. However, with the reemergence of the Three, and the subsequent increase in demonic manifestations in the world, the Order has shown a greater public presence of late.

Assassins do not employ the magic arts directly; rather, they use enchanted items that mimic elemental powers, which can function autonomously. To further avoid potential corruption, they also focus on the natural abilities of the mortal body-powers of the mind and unarmed combat. The Assassins have trained extensively in the use of an exotic group of weapons: sets of metal blades and claws that strap onto the wrists. They have expertly incorporated the use of these weapons into their martial arts, and when wielding one in each hand, an Assassin can deliver a devastating double attack. Even the most novice of Assassins is a past master of infiltration, and no lock has been made that they cannot circumvent. Hence, an Assassin needs no key to open locked chests.