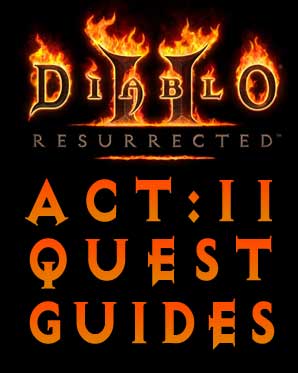 Once you have the Horadric Staff completed, Cain speaks to Jerhyn on your behalf, and convinces him that you are trustworthy. You can then speak to Jerhyn and gain access to the Palace. There are two levels of the Palace, then you enter the three levels of the Palace Cellar, and right in the middle of the third level you’ll find the portal to the Arcane Sanctuary.

Getting into the Palace can be tricky, if the person who created the game hasn’t done the quest yet when you complete it. Jerhyn won’t give you the quest yet, and the Guards will block you from entering the Palace. You will sometimes have to create a new game to get in, if you can’t find one to join that will allow you. Or you can ask for a portal to the Palace or Arcane Sanctuary waypoint and be able to get in that way in the future.

The Palace levels are small squares, and they have the same layout every game, with semi-random doorway locations. Once you’ve done them a few times, you’ll have them more or less memorized. A Sorceress or character with teleport charges can teleport down through the palace in literally 5 seconds per level. The Palace isn’t a bad place to level, but the Arcane is better, so no real point in sticking around, especially with the many skeletons non-leech. There aren’t any golden chests or many chests at all, though the large round beds on the upper levels of the palace can be clicked to reveal a hidden bonus of treasure.

I’ve been researching the old records, trying to find the location of Tal Rasha’s Tomb. Though I haven’t found the Tomb, itself, I may have a good lead for you.
The great Vizjerei Summoner, Horazon, built his Arcane Sanctuary somewhere around here. He was a powerful spellcaster and kept demons as slaves within the Sanctuary. He kept a close eye on great events, too — such as the imprisonment of Baal within Tal Rasha’s Tomb.
If you could find Horazon’s Sanctuary, I’m sure that it would hold some clue as to the Tomb’s location. Though I doubt Horazon is still alive, you must proceed with caution. There’s no telling what could be waiting inside.
When I spoke of this with Lord Jerhyn, he asked that I send you to him. Perhaps he knows of a secret entrance or the like.

Arcane Sanctuary? That place sounds awful! Even if you find a way into it, what makes you think you’ll be able to leave again?

I very much doubt that Horazon still lives in his Sanctuary. He possessed great power and influence over demons, but even that may not have been enough in the end. One of his notoriety cannot easily remove himself from the vengeful reach of Hell.

Nearly a thousand years ago, Horazon rose to the fore of the Vizjerei mage clan. Horazon used the knowledge of the Vizjerei to summon and control demons from Hell.
Though a powerful Summoner, Horazon feared that the Lords of Hell would punish him for enslaving their brethren. Thus, the Summoner created for himself an Arcane Sanctuary.
He believed that his Sanctuary would not only protect him from Hell’s vengeance, but also allow him to continue his studies free from the ravages of time and disease.
Horazon had crafted many wondrous scrying devices through which he observed the events of the world outside. It is certain that he took careful study of Tal Rasha’s imprisonment and recorded the location of his forgotten Tomb.
The Arcane Sanctuary was believed to have been constructed here in Lut Gholein. An entrance may be hidden somewhere in the palace, as that building is very old, and was once a Vizjerei fortress.

An ‘Arcane Sanctuary’ under the palace? I’d heard that there were some underground cellar levels that Jerhyn used as chambers for his treasure and such, but no Arcane Sanctuary.

Ah, the ancient mage Horazon! He believed that he could bend Evil forces to his will. What he didn’t know was that Evil uses man, not the reverse.
The Vizjerei still revere him as a symbol of man’s ability to triumph over other worldly forces. The Church of Light, however, cites him as an example of man’s folly.

Look, look… I’m just about as tough and arrogant as they come, but you’d never catch me trying to tame a demon for a pet. That’s just asking for a lot of trouble.

The only thing in Jerhyn’s cellar are the harem girls that have been hiding there since the troubles began.

When the troubles began here, I allowed the terrified Harem guilds to join me within the safety of the palace. All was fine, until one night…
Screams echoed up the stairwells from the harem. My guards arrived to find the poor girls being slaughtered by a merciless band of hell-spawned demons. My brave guardsmen tried to push the demons back into the mysterious rift from which they came.
Ever since, my men have fought a losing battle. Demons have continued to pour through the rift into the palace. Ultimately, I hired Greiz and his mercenaries to help protect the rest of my fair city.
Drognan believes that the Arcane Sanctuary lies buried underneath this palace, since Lut Gholein occupies the site of an ancient Vizjerei fortress.
My palace is open to you now… Take care.

Horazon found it necessary to lock himself up for all time, just to protect himself from those angry demons. Such is the fate of one who practices the summoning arts… that, or eternal damnation. There’s old summoners and bold summoners, but no old, bold summoners.

Ahh… The legend of Horazon is an old one, especially around these parts. You wouldn’t believe the feats and strange events that are attributed to him.

A careful caravan gives wide berth to sleeping bandits. If Horazon is gone, let him remain so.

So you’ve been in the palace, have you? Tell me, why does Jerhyn keep that place locked up so tight?

I’ve been thinking about the problems in Jerhyn’s palace. Perhaps this has occurred to you as well…
If those cellar passageways lead to the Arcane Sanctuary, then that is where the demons came from. Horazon’s haven must have been breached!

I am certain that you will find the information you need when you find Horazon’s Journal. I suggest you find it quickly, for Diablo may be getting closer to freeing his brother as we speak.

I understand that you’ve been talking to Jerhyn. Well, if so, then you’re the first in a long while… since the trouble began, actually.
Do us a favor and try to find out what’s got Jerhyn so edgy all the time. OK?

Even a sanctuary such as Horazon’s can be breached by the tentacles of Evil. Such a haven could have become a chamber of unspeakable horrors. Be wary of what you may unleash!

All my years of brawling, of pummeling both the unsuspecting and the deserving, have yielded two insights. You can either fight or you can run. All other strategies are variations of these.

What’s got you so occupied in the palace? Don’t tell me you’re finding the Harems more compelling than killing demons? That would be out of character for one such as yourself.

There was an eastern mage… a Vizjerei, I believe… who visited me almost a year ago. He was very interested in the history of this site, and he seemed particularly fascinated with the palace architecture.
I gave him a tour. When he found the ancient seals over a passageway in the cellar, he became very agitated. He asked for some time alone to study them, and I granted it.
Shortly after, he left with no further word and I never saw him again. Odd… Don’t you think?

Huh? The horizon is always out of reach, you should know that. Oh, Horazon! Oh, I see. Uh.
Yes. Well. He was insane. Brilliant, yes, but… total lunatic.

So… Now that you’re such a pal of Jerhyn, why don’t you ask him if I can set sail one of these days? I’m running out of patience.

Fate is like a caged gorilla. It will pelt you with dung if you mock it.

Seekers of the Tomb of Tal Rasha will find it through the Portal. But know that the glowing glyphs recorded here in my Arcane Sanctuary are the signs of the six False Tombs.
The missing Seventh Sign marks the Tomb of Tal Rasha… Of the Horadrim he might be called the foremost.
It was a shining – but brief – moment for the Mage Clans when they set aside their differences and worked together against the common enemy.
The Horadrim relentlessly pursued the Three across the desolate Empires of the East, and even into the uncharted lands of the West, leaving the Archangel Tyrael’s hands unblemished.
Presuming the Three to be vanquished, the Horadrim’s unstable fellowship began to dissipate. Abandoning their sacred charge to safeguard the three Soulstones, the disparate Mage Clans began to squabble amongst each other over petty differences.
Their conflicts not only dissolved their brotherhood, but strengthened the Evils which they had buried beneath the cold earth.

Oh, those poor women! Will the slaughter never end? Thank you once again for protecting our city.

You must move quickly now, friend, for Diablo is undoubtedly close to finding what he seeks. Find the Tomb of Tal Rasha before he frees the Lord of Destruction.

You have found Horazon’s Journal. Excellent… But, I must caution you.
The mark of the True Tomb of Tal Rasha, is sought, if not already known, by Diablo. I needn’t elaborate on the implications of that.

News of the tragedy in the palace is spreading fast. How awful! And to think, this whole time I thought Jerhyn and his guards were in there playing with the harem girls.

Faith is stronger than any armor. The shield will protect the body, but Faith will strengthen the courageous heart.

Hah! I wish Jerhyn would’ve let me in the palace. I would’ve saved those girls and kicked demon ass back to the fire-pits o’ Hell!

Unbelievable! The Harem girls are dead! The palace guards have been fighting off demons from the cellar. How could that happen without my knowledge?

I thank you for your heroic aid! I’m also glad that you found something you were looking for. The journal should help you find the True Tomb of Tal Rasha. Hopefully, there is still time to get there before Diablo.
Go now. And good luck.

Horazon’s urinal? Oh, journal! Yes, well… Glad you found it. Such a shame about those poor harem girls, huh? I shall miss them deeply… I mean their conversations, of course.

So… Now we know Jerhyn’s little secret. Well… I guess I can see why he wanted me to stay, though… I’m just glad it didn’t come to that. Now he tells me to wait some more, in case you need to get out of here.
Well, for you I’ll do it. Maybe they’ll mention me in the epic ballads, eh?

Well, the news going around town is very unsettling. Apparently, we were in more danger than anyone thought.
Good work friend… you may have saved all our skins.