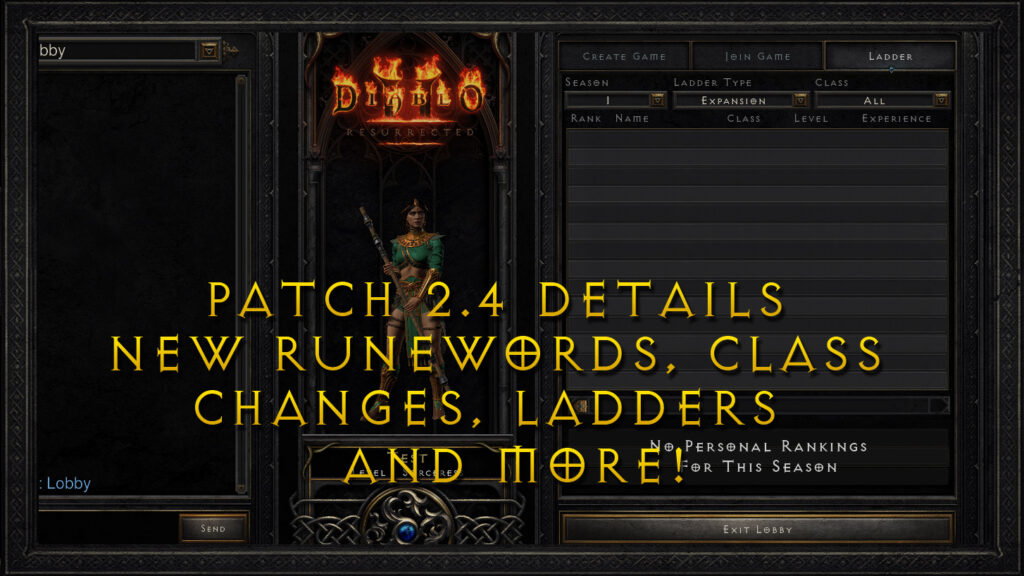 Finally, some news from the dev team on the next major update and the long-awaited ladders with this Diablo 2 Resurrected Patch 2.4 update.

First the bad news, ladders are not going live until next year and there’s no definitive date for their launch. Now the good news. We’re getting new Ladder-only Rune Words. That’s not all, for the first time in a very long time, there are going to be class balance changes.

There’s also a mention of new Cube recipes and set item changes but more details will be revealed in a Stream tomorrow. Exciting times for Diablo 2 players.

Below are all the details now discuss the changes!

Greetings, Heroes of Sanctuary. We’d like to take this opportunity to highlight exciting upcoming balance changes, alongside a couple of new features coming in our next Diablo II: Resurrected update!

PLEASE NOTE: Game content discussed in this blog is not final and subject to change.

Prepare to seek your glory. Ladder Rank play is arriving early next year! Our priority for Ladder Rank play has always been for this mode to be a smooth experience. The competitive nature of this feature demands stability as players race towards 99. Our teams have continued to invest time in making the game experience and performance smoother for everyone. We can’t wait for you to begin your climb, but for now, let’s dive into some exciting details around this upcoming feature!

For the first time, players will have the chance to unlock a host of new Rune Words in the Ladder system! To be clear, these Rune Words have never existed in the game before, and they will not be accessible in non-Ladder play like the previous set of Ladder-only Rune Words in the original Diablo II experience. At the end of a Ladder season, players who successfully made these Rune Words will have their Ladder characters be moved into a “non-Ladder” version of the game. Then at the beginning of the next Ladder season, players will make a new Ladder character and start all over again to earn new rewards. Currently, we don’t have specific new Rune Words to showcase, but if you tune-in to our Developer Update Stream (more details below) hosted by content creator MrLlamaSC, you’ll be able to receive a glimpse! 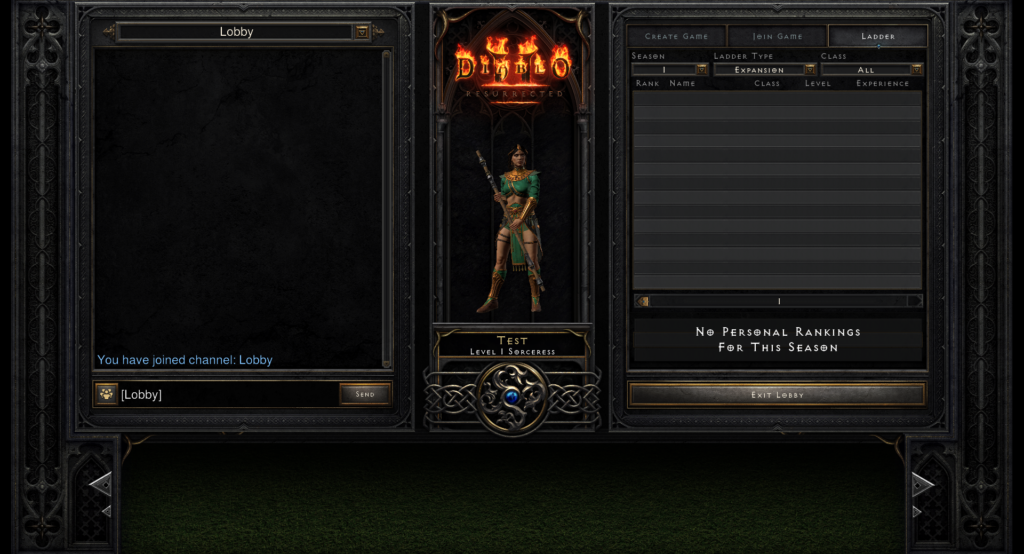 Lastly, we’ve been monitoring discussions around Ladder Rank play in the community. The duration of Ladder is an element our team is still trying to gauge as we progress forward, but we’re looking to create the “rush” of a new ladder and find the best timeframe for Ladder rotation that meets your expectations. Presently, we’re considering four months for Ladder Seasons. We’ll continue monitoring the community’s opinion and preference on this front as we approach PTR for Patch 2.4 early next year.

After so many requests from the community, we’re thrilled to share new balance changes are coming to your favorite heroes in Diablo II: Resurrected! As fans ourselves, we’re just as eager as you to find new ways to play. This is incredibly special, as the last patch to make balance changes to classes in Diablo II was Patch 1.13c, which was released back on March 23, 2010! Now, eleven years later, we’re making new changes to expand character build diversity, and retain class fantasy and specialty! These goals are crucial. We’re reviewing underused skills, assessing casting delays, making tooltip quality-of-life changes, and more to fulfill these goals.

We want to empower you to be creative with the builds you want to play, but we don’t want to “reinvent the wheel” and steer classes from their core purposes. Without diving into the specifics, let’s take a peek at the philosophies behind various Class changes. 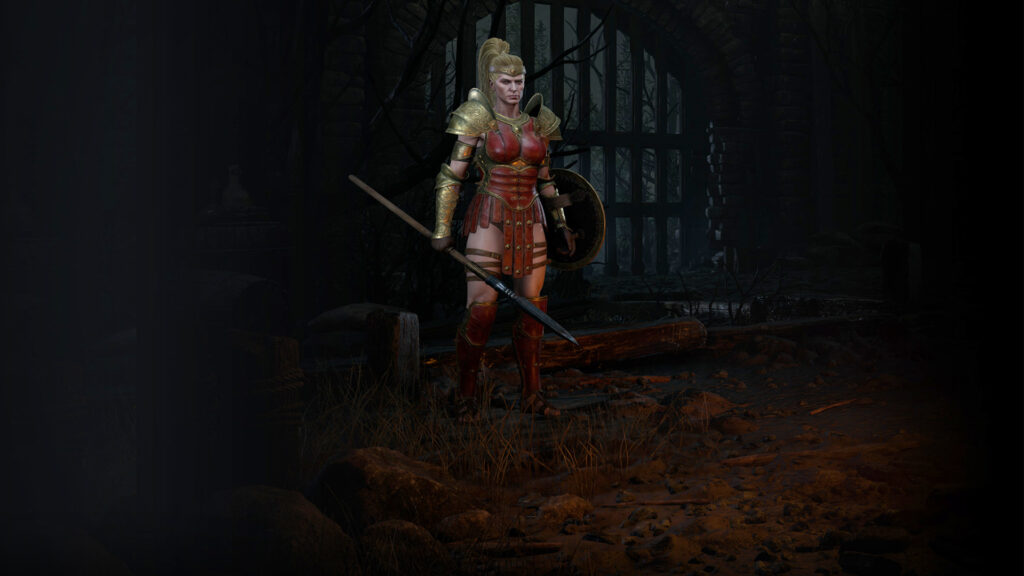 The Amazon’s agility and versatility are profound. Generally, we like the current state of the Amazon class and believe her to be quite balanced. Nonetheless, we see an opportunity to improve the Amazon’s melee skills. We want to buff the strengths of certain underused melee skills such as Impale and Fend to give more reasons to use them. We are also looking into freeing up synergy requirements for melee skills to give more skill point freedom for other possibilities.

Additionally, we are also considering buffing certain skills in the Bow and Crossbow tree to help improve bow gameplay in higher difficulties. 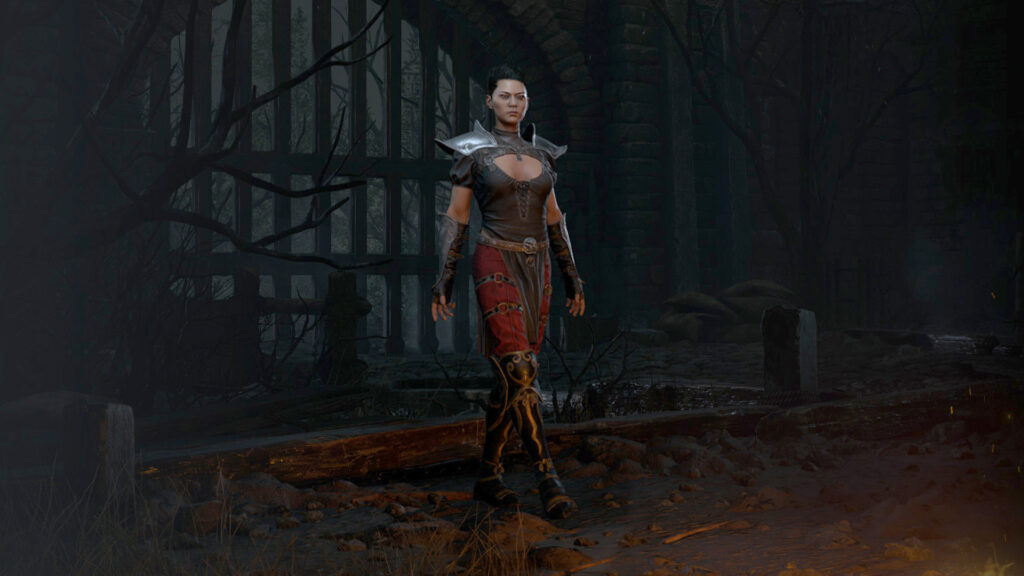 The Assassin vanquishes evil from the darkness with great ease. However, for this class, we see an opportunity for the Martial Arts builds to shine brighter. Martial Arts skills can become increasingly challenging to perform in higher difficulties, so we are re-evaluating how to improve generating and spending Combo Points. 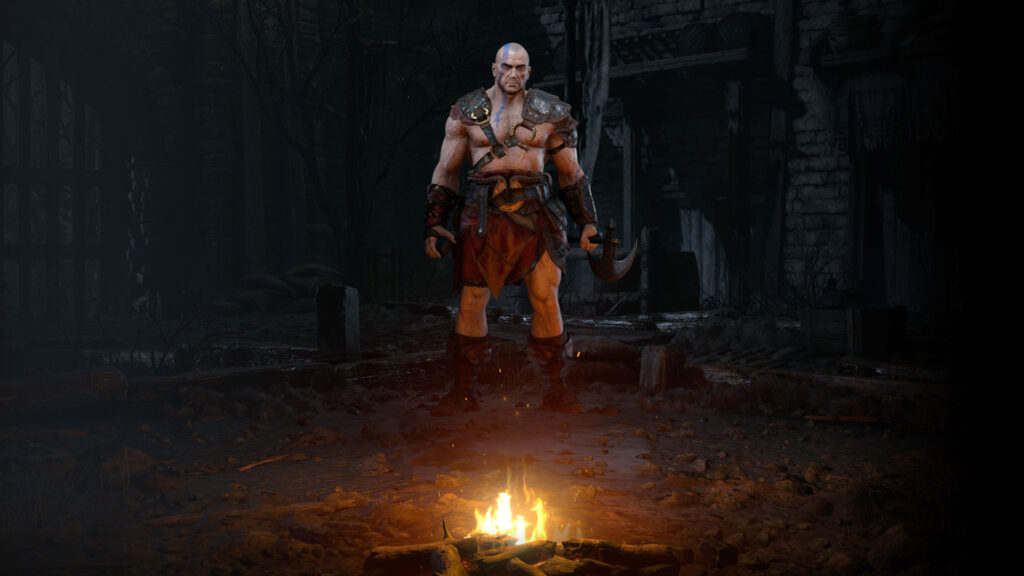 The brawn of the Barbarian is unmatched. Nonetheless, we see opportunities to add more diversity to Combat skills. We’re looking into adding more possibilities with Combat Skills such as Leap Attack and Grim Ward, while also re-evaluating skill synergy requirements to promote more reasons to spend points on certain Combat Skills.

Additionally, we think Throwing Barbarians can be more viable, so we are looking into enhancing the Double Throw and Throwing Mastery skills. 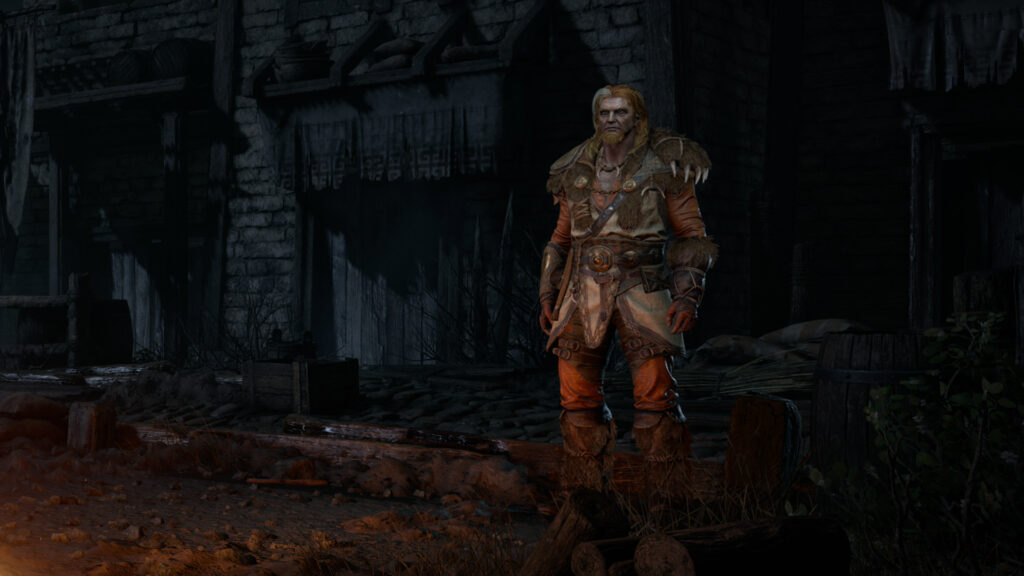 The bestial ferocity of the Druid makes all tremble. With that said, we see exciting opportunities to level up certain aspects of this class. From our perspective, Druid Fire skills are underperforming. We’re re-evaluating Casting Delays for Fire skills, exploring improvements to some of their Physical Damage components, and improving synergies. We’re also looking at potential tweaks affecting other Elemental skills that are underused. We want to improve the controls for Arctic Blast too, such as allowing more free form while channeling and no longer locking your targeting onto one enemy at a time.

Regarding Summon skills, we believe Summons are weak in high difficulty. On this front, we’re evaluating health gains per level, quality-of-life improvements, damage output, and new synergies for Ravens, Wolves, and Vines. 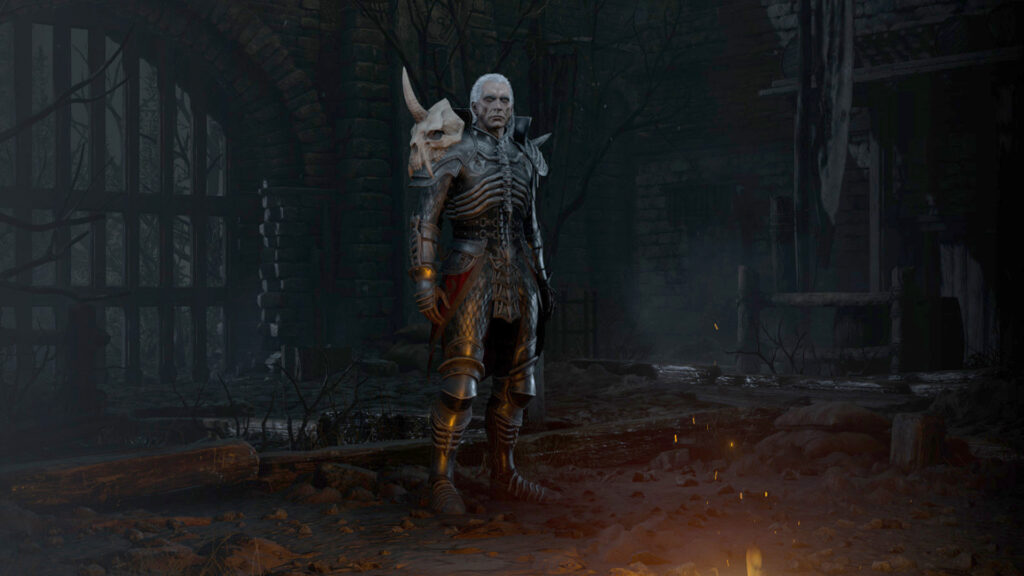 The commander of death sends his foes to an early grave. Like the Amazon, we like the current state of the Necromancer class. Nonetheless, we see an opportunity to improve specific Summons we believe are underused. We’re balancing elemental damages of Skeletal Mages and making lesser used Golems more effective.
Additionally, we see opportunities for Bone skill improvements in high difficulty. We’re tweaking synergies on this front. 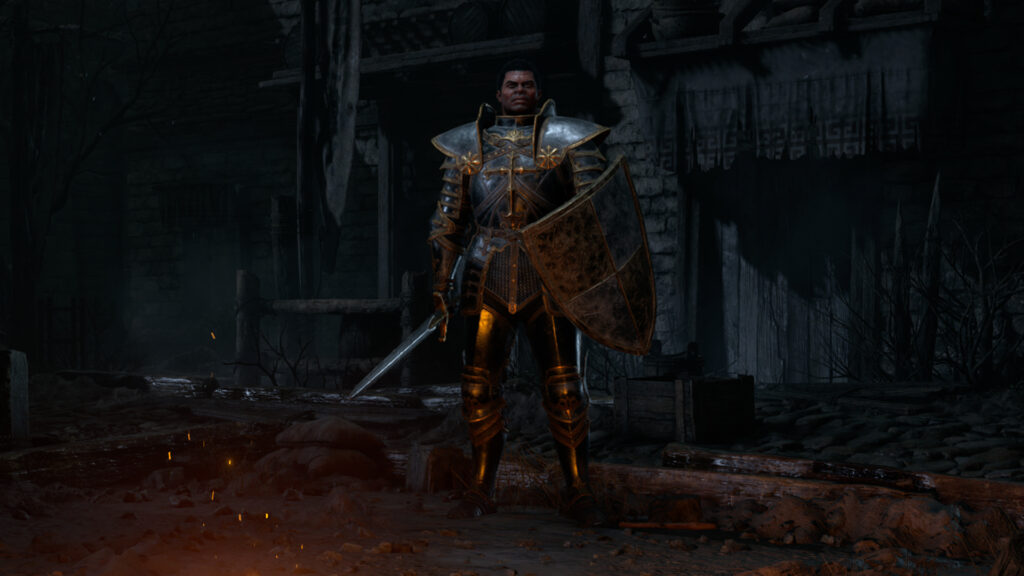 The wrath of the holy zealot is glorious. Despite this, we believe certain Combat skills are underused. We’re exploring ways to make lesser-used skills (I.e., Fist of the Heavens) more utilized, so players have more reasons to spend skill points to unlock these skills.

We also see an opportunity to scale Offensive Aura skills as well. This includes making improvements to AoE Damage auras to make them more effective at closer range. We also want to improve Thorns so that it can scale better and deal more reliable damage at higher levels. 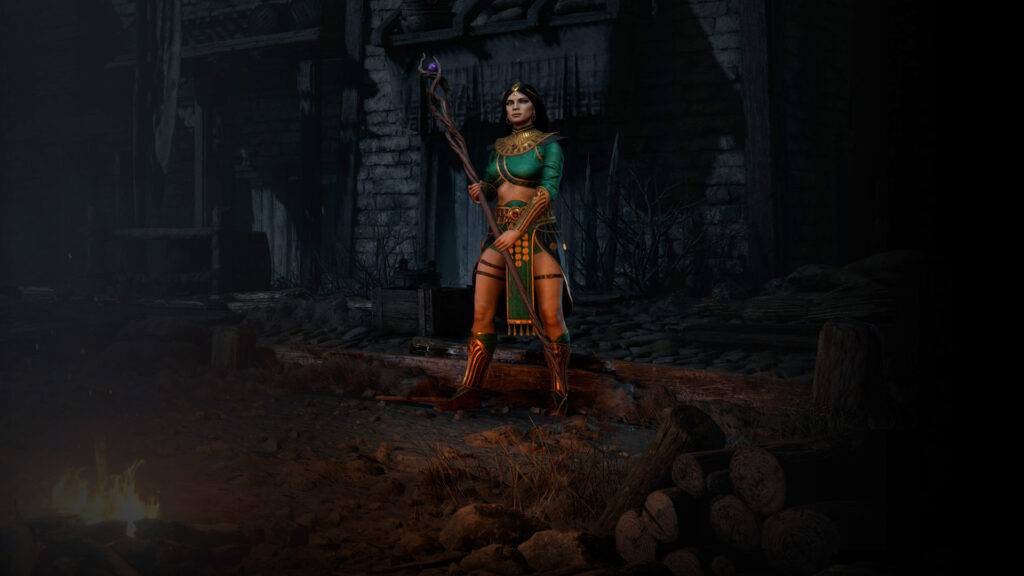 There is no greater master of elemental magic than these mages. We’re very satisfied with the Sorceress’s current state, but we see a few of opportunities for improvements.

Regarding Cold Skills, we believe there can be more diversity with the armor skills (I.e., Frozen Armor, Shiver Armor, and Chilling Armor) for distinctive advantages.

We are also looking into adding more build possibilities around lesser used Lightning skills by exploring more skill synergies.
Lastly, we’re also revisiting Fire skills, to improve underused ones, like Hydra. Similar to Arctic Blast, we’re exploring making player control improvements to the Inferno skill so that it is less clunky to use.

And we’re not done. Class Balance changes aren’t the only updates players want to see. We’ve seen a lot of feedback from the community around the subject of Mercenaries, and we are making improvements to Mercenaries in a variety of ways. Many players enjoy using the Desert Mercenary, and we want to give more reasons to use the other three mercenaries, so we are looking into improving their skills and stats to enhance their identity and fantasy.

New Horadric Cube Recipes, Set Item changes, and new Rune Words are on the horizon! New Horadric Cube Recipes being implemented will allow for upgrading the item quality of Set Items to give more item build possibilities. Set Item changes will update underperforming Set Items, to have more bonuses, giving players more incentive to pursue Partial and Full set items that can complement the skill changes alluded above. Lastly, new Rune Words will be added to complement the Skill and Mercenary changes coming in the update. 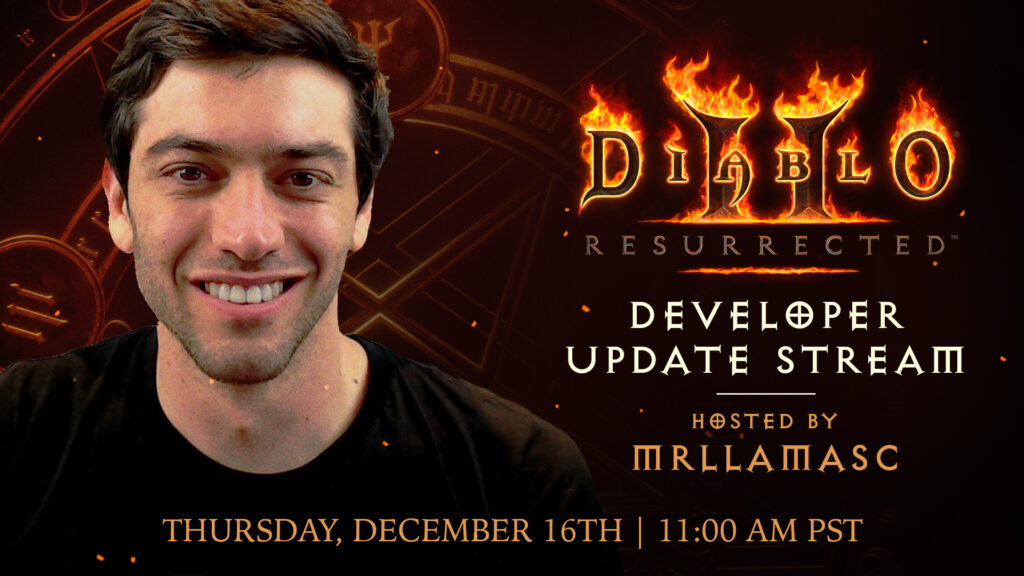 This blog is just scratching the surface about upcoming changes and features coming in Patch 2.4 PTR (coming early next year)! To learn more, we invite you to join community content creator, MrLlamaSC, Diablo II: Resurrected Design Lead, Robert Gallerani, and Senior Game Producer, Matthew Cederquist, in their upcoming livestream. This broadcast will be both a presentation and an opportunity for members of the community to ask questions. We can’t wait to share more with you then!

This has been an incredible year for Diablo II: Resurrected. We wish our community a happy holiday season and a happy new year! Thank you for playing our game and thank you for your continued support!

I am super excited personally. I wanted this from the get-go.

I'm really excited for this, but I need more character slots. I've barely been playing because my slots are all used and my mules are full so every time I find something nice I have to spend a lot of time agonizing over what to throw away.

Currently listening to the stream, they are going to make us smash the Orb in Act 3, making us go through the jungle.

WHY WOULD YOU DO THIS TO ME BLIZZARD????

Currently listening to the stream, they are going to make us smash the Orb in Act 3, making us go through the jungle.

WHY WOULD YOU DO THIS TO ME BLIZZARD????

omg this is the best update for d2r items, i am so excited to play again to play new ladder season.. altho not much time now to farm but is ok, i used to buy diablo 2 resurrected items from shops like xxxxx or xxxxx so i guess ill have to lose my paycheck again soon lol. I cant wait for the new ladder season to start and to see and buy the new d2r runewords!

omg this is the best update for d2r items, i am so excited to play again to play new ladder season.. altho not much time now to farm but is ok, i used to buy diablo 2 resurrected items from shops like itemnow.com or d2legit so i guess ill have to lose my paycheck again soon lol. I cant wait for the new ladder season to start and to see and buy the new d2r runewords! 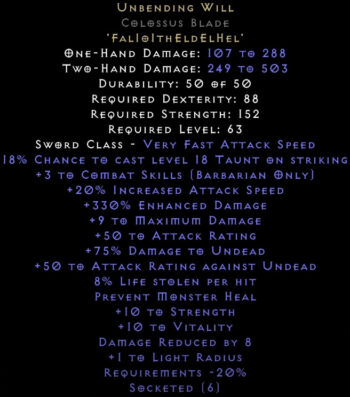