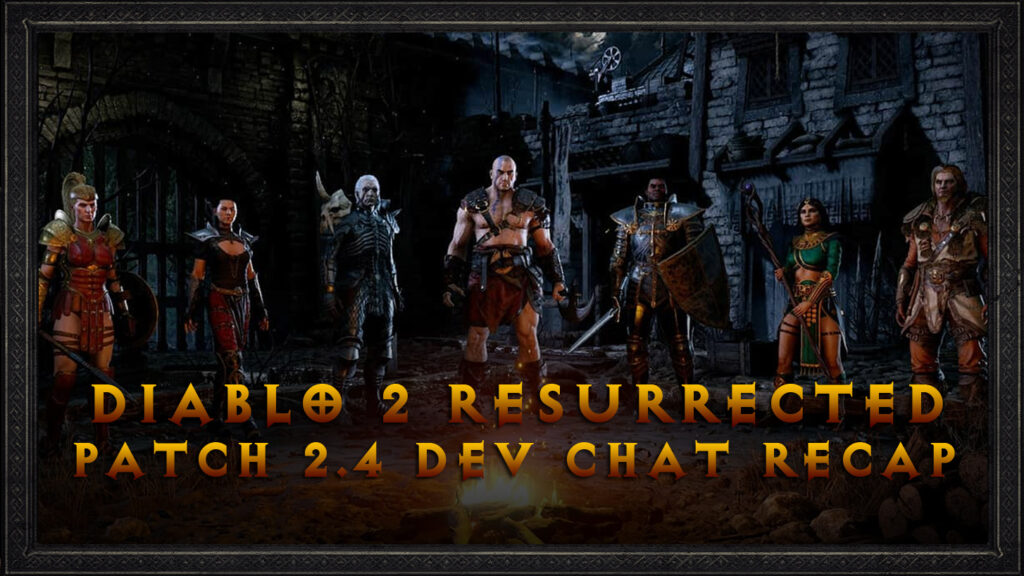 This evening Blizzard’s D2R team held their live chat stream to talk more about some of the changes coming in Diablo 2 Resurrected patch 2.4. There’s a lot to take in so if you’re short on time, here’s a recap of everything that was discussed during the session.

It’s apparent they are being ambitious with changes but also very aware that there’s a long-standing community of players that want to see changes in the spirit of the original game. With that in mind, they are being cautious.

The PTR will really help the team understand what changes are working and what are not in this new chapter for the game. See the briefer recap notes below the video.

Update: Let us know what you think of the changes in our latest poll.

We know the clone is a pain to deal with. This is something we are actively looking to redesign it in a way that it will bring it to a larger audience.

No plans at the moment.

Get the game out is stage one, stage 2 is the PTR but we want to get it right and make the current changes that make sense to the game.

What change are you most excited to see?

We have such an established meta but we’re excited to see how it is when we shake it up.

Are you planning on new bosses or end-game content.

Not at this time.

Any plans to buff items like two-handed swords or staves

This will depend on specific feedback.

3 temp stash tabs at the end of the ladder but as of right now there’s nothing been done about stash tabs.

They are putting a great amount of effort to ending spambots and spam in channels but not a list that can be shared out.

Will these changes affect classic mode?

Some of them will and so the rebalancing of abilities in the Assassin won’t but they are changing how the Sorceress works in at least things that do exist.

Nothing is planned at the moment but it is possible. There are new Cube recipes. You can end up upgrading tiers with set items.

No, they won’t allow that. Can you stash them in a special stash tab? It’s in discussion.

Not a themoment, it would have to be done right and it’s tricky getting that right.

The PTR will be the test but they are keeping a close eye on it.

Any bugs you are currently looking at fixing?

The loading screen is always something they are trying to improve. But variables such as hardware comes into play. Hopefully you’ll seee less of it but it’s a constant effort to balance.

No, it won’t be on BattleNet.

Console players will have to wait a little longer for any details on console changes but they will announce things in due course.

Reading this, I'm quite pleased to not have moved any SP character.

Not that the changes are completely wrong, we will see. But there's so much left to be done with classic that if it becomes a different game, let's keep it separated.

Will not be an easy task to define balanced setups in SPF tournaments...with new runewords, on the long term, things are going to be wildly different!

Great write up, thank you.

Great write up, thank you.

will the patch be for ladder and non, while the runewords remain ladder only or the patch is only for ladder?

will the patch be for ladder and non, while the runewords remain ladder only or the patch is only for ladder?

Patch is for online play, both ladder and non ladder
Ladder runewords are ladder only and the ones that are made in ladder are available non ladder when ladder ends