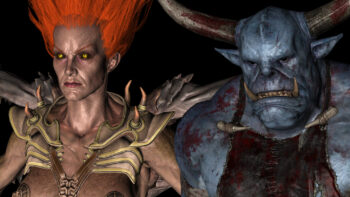 There’s been a lot of discussion about the look of the new visuals, especially the main character themselves, and how they have been interpreted. There have also been debates about “censoring”, but you have to think about what the team had to work with.

How detailed are the Diablo 2 Resurrected Monsters?

Diablo 2 classic did a great job at adapting great concept art down to a small number of pixels. There’s not that much detail on characters and monsters in the original game. Your brain is tricked into thinking the characters are more detailed than they actually are. I think we can all agree that worked rather well.

So where does that leave the current development team? They have had to create new models that are as close to the original art and concepts as possible and then bring them up to speed for a modern gaming audience.

A new feature in Diablo 2 Resurrected is the addition of the zoom function which allows you to get closer to the action. While it gets you close, it doesn’t show the huge amount of detail and attention the team has paid to the updated models.

This weekend I decided to take a dive into the game files and start taking a closer look at the models and textures. This is the only way to truly appreciate the development team’s efforts and also understand how they are interpreting key characters and monsters in the game.

I have no doubt there will be Diablo 2 classic players that will take issue with some of the interpretations, but overall I think they have done a decent job considering what they have had to work with.

In this first video, I have taken some of the more recognisable monsters from the Tech Alpha and put them under the microscope. This gives you a better idea of how the new models, textures, and animations appear in the game. This level of detail you cannot fully appreciate while you are playing, even when zoomed in.

I have read so much about Diablo 2 Resurrected monsters and characters “censorship” since the Technical Alpha launched but once you take a look at these, you may change your mind. Take Andariel for example, she doesn’t leave much to the imagination as far as her lack of clothing is concerned. That said, I’m still perplexed as to why how much clothing an NPC or monster is wearing would put people off from playing the remaster when it’s the gameplay we should be interested in. That’s what keeps us playing.

Then there’s the argument that there’s not enough gore. Looking at some of these models, especially ones such as the Goatman, you can see there’s plenty of blood and splatters all over the textures. I mean how much do you really want? And more importantly, how much can you actually see on monsters when you are playing the game from the normal viewpoint?

There are quite a few more bits and pieces to check out into including more monsters, the characters, and the NPCs. Digging around in the files is really showing how much effort has gone into this remaster. I’ll be back with more soon so stay tuned. For now, check out this first video.

Update 10 May: Also check out A Closer Look at the Diablo 2 Resurrected Characters video.

The Diablo 2 Resurrected Monsters in Action

An exception occurred: [ErrorException] [E_WARNING] call_user_func() expects parameter 1 to be a valid callback, function 'better_comments' not found or invalid function name in /var/www/vhosts/purediablo.com/httpdocs/wp-includes/class-walker-comment.php on line 184