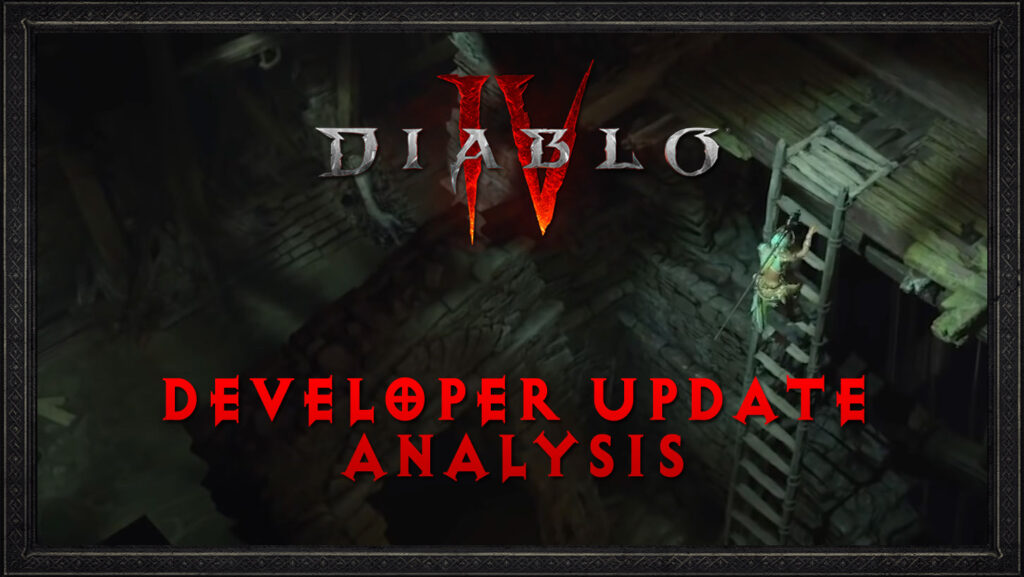 I went through the quarterly update without watching any videos on my initial pass.  The second time through I watched the videos as intended in the March 2022 Diablo 4 quarterly update. The PR team used focused keywords to get you enticed into the dark and medieval look strung about the article.  Yes, Sanctuary is very dark and the best other fictional world I would compare it to is: Hyborian Age in Conan the Barbarian.

I read the Sin War back around 2008 give or take a year.  In that the main character, Uldyssian, lived in a small village that was in a forest surrounded by life.  It wasn’t totally cut off from the outside darker world, but set the tone of Sanctuary.  There will always be little bright villages and towns where people go about their daily lives and thrive.  Imagine the Rogue Camp being on the outskirts of a small town where the rogues come to train.  In that small town or village traders such as Warriv come to hawk wares and shelter for the night at the small tavern or inn.  Like Tristram, but without the giant Cathedral in Diablo 1.  After reading all the books and playing all the games I envision Sanctuary as:  A sprawling and bustling world with different religions, building methods, and bustling towns/cities about with the smaller villages scattered throughout.

One key sentence that I felt directed the entire art direction was: “Even the wealthiest areas in Sanctuary are challenging to exist in.”  Challenging does not mean lacks beauty.  Look at the Pandemonium fortress for example in Diablo 2.  That little snippet of what we get shows beauty.  Westmarch is a bustling hub of trade and although Diablo 3’s vision is not what I’d like to see reproduced.  I would be happy with a couple central hubs that are still going strong.  I envision a few towns looking like Tar Valon from The Wheel of Time series.

After viewing the videos, I did not see that from the developers.  What I saw was the insistence of moving 110% away from Diablo 3’s color palette.  I’m going to give my thoughts on the different areas and some of the art style depending on the area.  Without showing combat and monster density it is really hard to gauge the areas for what they are.  I’m going strictly on what I see in the videos.

I loved what I saw here.  I see everything I would expect from The Pits or any other interior design in Diablo 2.  We start with a Barracks/Jail style layout to allow bigger rooms, while still having some small corridors that our heroine traverses.  Going down for the transition was nice and was a little more crowded than I liked but had some medium-sized rooms near the end.  The layout overall was easy to see and follow.  I play with the map on and I wish it was shown in the videos to give us some better ideas on how it’ll all look when most people play the game.

I’m not going to lie, what I saw was a more robust opening in Path of Exile with the town taking a center stage and a bit greener from the seaweed and kelp.  The rotting corpses shown give an idea of monster density possibly.  They look heads and above better than corpses in Diablo 3.  Overall, though I thought it was too narrow throughout the area for good fighting.  One thing Diablo II excelled at was positioning.  If you aren’t geared to the teeth, positioning matters a lot in the game, just ask anyone who has died in hardcore.  To have solid positioning you need more than just narrow passages, you need line of sight attacks and I’m not sure we got that here.

I really like this area.  It was like walking out into the Lost City with actual buildings.  Good open spaces with buildings instead of ruins.  Gave a really good vibe.  Add some windows that had stained glass to add a bit of color to the palette and would have been perfect.  This was the best designed for me both visually and environmentally overall.

I did not like the initial parts of this area.  As you got near the 0:45 mark of the video it opened up a bit and I thought that was good.  It just appeared compact overall.  Minimal movement available and very linear in nature.  Yes, these are dungeons that are going to be linear, but when it looks that way entirely it doesn’t help.

This is not my style.  It doesn’t look or feel right and appears like it belongs in Diablo III with a darker palette.  I get fighting minions in a town, but it looks forced in design.  We need to fight in a city with high walls:  Here you go.  Make it look more like a town then.  Open areas in where people gather.  A town center with the area boss in.  Think of Act 3 Durance of Hate with the center holding Mephisto and the sides holding some good farm targets too that you’d want to hit.  Instead, they are delivering narrow passages through the city with elevation shifting constantly.

This place might be soon forgotten too.  I get the art style and the dark and demonic tentacle look.  The overall appeal though is very minimal to playing in it.  I don’t like open terrain that is tiered that the minions just sit around and wait when all they have to do is look up and get LOS.  I really do not like the design of tiered spaces unless they are done correctly, and frankly in the perspective the game is played in they just aren’t in my opinion compared to a more open game such as Elder Scrolls.

Closing thoughts: Visuals are great, but we need more meat to be able to fully digest these places shown.  A 1:30 minute average look of an area with zero context to enemies, skills, HUD being on really gives a lot to be desired and improved on with the next update given.  Do they look good graphically?  Yes, overall.  That is what we got though and I’m going to reserve play judgement and functionality until either I’m playing it, or watching someone else play it with actual content involved.  My overall biggest complaint about the videos are they looked like whoever was operating the characters didn’t know what the areas were or how to navigate sometimes popping a chest or hit some interactable object randomly or back peddling to hit something.

My main takeaway from your review is, you like D2 and dislike D3. After watching some of the clips I think they might be going overboard with the dark. In some of the dungeons you cannot even see anything, I wonder if light radius will be a thing. In other areas it is just green and gray. Overall, I think they are a lot farther along in development than what some believe. D4 should be new and exciting and stand on its own. I hope they do not try and placate the vocal minority too much. I do not want a rehash of anything.

I don't have high hopes for D4 to be perfectly honest. Much like recent Hollywood movies, what I'm expecting is something more formulaic than art. Something that was built entirely out of focus groups and the whims of overpaid executives trying to deliver what they think people want rather than what people actually want. In fact I'm half expecting another "don't you guys have phones" moment when launch day approaches.

The bit about moving away from D3's color palate illustrates the point. They heard people talking about how D3 was way more colorful and bright than what was expected, so in D4 lets make everything dark. But that's not exactly the right way to go either.

My main takeaway from your review is, you like D2 and dislike D3. After watching some of the clips I think they might be going overboard with the dark. In some of the dungeons you cannot even see anything, I wonder if light radius will be a thing. In other areas it is just green and gray. Overall, I think they are a lot farther along in development than what some believe. D4 should be new and exciting and stand on its own. I hope they do not try and placate the vocal minority too much. I do not want a rehash of anything.

My specific about Westmarch is that it did not appear to be a bustling center. I know the storyline was meant to give it a dark and gloomy look as it was under siege, but the general layout was my main issue. Many of the areas in D3 were not true to previous games or were too far off from reality in my opinion to.

The best color palette to use would be a mixture of the two games, but it appears they are going to go full bore away from D3 regardless, which wouldn't give the realism look they are going for. And the green and grey you mentioned is exactly what I want them to change, add a bit of color to it.

I agree they are further along in development than they say they are and wouldn't be surprised by a launch mid/late next year. Maybe even earlier. But as for a rehash, they have to take the best parts of each. D3 blew D2 out of the water in animations and movements and with the D2R if you take a side by side, D2R looks hell of a lot better to me, and is actually the reason I stopped even trying the last 2 seasons of D3 because it just looks bad now and the mindless grind turns appeal to me other than for 2 weeks a season.

There is no completion in D3. That is the issue and if D4 goes the same route of never feeling I completed a character it really ends in the same boat.

I have hopes that it'll be a fun game, but it won't be something I can continually test the boundaries of and play in unique ways. @Glurin hits the point on their approach.

Honestly, not to promote this site, but they really should come and take a look at the SPF. Pick some of the players brains on why they played this. Same as in I would go over to the BG2 sites and read why people are still playing that 20 years in. D2 is about the choices in equipment and how it isn't a one size fits all approach and is completable with tactics and not just raw damage.